By Simon Tomlinson For Mailonline 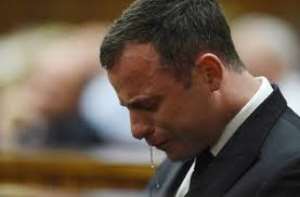 Oscar Pistorius has been found guilty of manslaughter over the Valentine's Day shooting of his girlfriend.

At he arrived at court, the Paralympian was surrounded by bodyguards as he pushed his way through the throng of media to get inside the Pretoria High Court.

The double-amputee sobbed yesterday as he was dramatically cleared of two murder charges over the Valentine's Day shooting at his home in Pretoria last year.

But judge Thokozile Masipa had hinted the 27-year-old may be convicted of a lesser charge of culpable homicide after describing his actions as 'negligent' on the night she died.

I Owe my Ex-Keturah Hamilton A Debt I Can Never Pay For Life……..Jim Iyke

Is Yvonne Nelson A Natural Beauty Or A Make Up Beauty?

Homos Are Not Safe In Nigeria--Aderonke Apata Yells

Officer arrested for forcefully kissing the thighs of woman ...
49 minutes ago