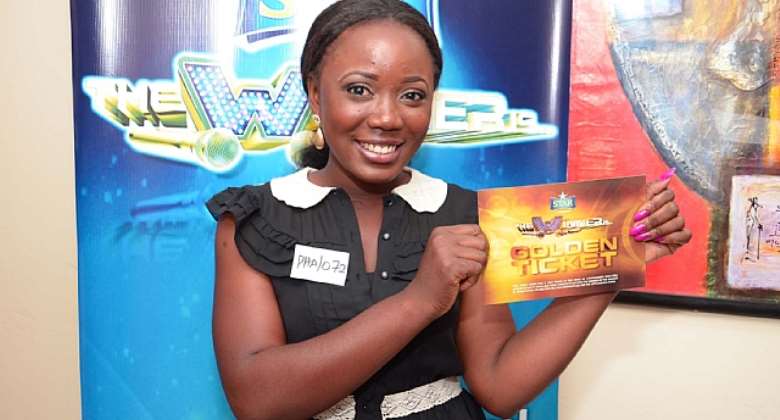 After one week of rigorous regional auditions, the search for the most vocally talented Nigerians to take part in Africa's first ever music talent and game show 'Star The Winner Is' came to an outstanding finale in Lagos on the 8th of May 2014.

The regional auditions which took place in five major cities, kicked off on the 29th of April 2014 in Benin and ended in a two- day vocal talent extravaganza on May 7 and May 8 drawing thousands of hopefuls with a record- breaking turnout converging at Acquatic Hotels in Ikeja Lagos.

With a massive overflow of vocally talented individuals storming the venue for the audition finale, the talent packed event delivered a graceful outing to wrap up the auditions phase.

In the midst of the colourful multitude that thronged the venue, 29-year old singer, Henry McJohn stood out. Henry who had been on several musical talent hunt shows impressed the selectors with his rendition of Gerald Levert's I'd Give Anything.

“The way he ran the notes of such a technical song effortlessly is simply astounding, he definitely deserved to move to the next round”, said an impressed Anis Halloway, one of the selectors.

Another noteworthy contestant, Nonso Iwuchukwu who earned himself a golden ticket with his flawless rendition of Beyoncé's Love On Top was visibly shaken and overwhelmed.

“I can't believe what I just experienced, this is my very first audition and I can't wait to prove that I really did deserve the golden ticket”, said an amazed Nonso.

The other cities had some remarkable performances that held the selectors in awe, one of which was 23-year-old Micheal Achu from Enugu.

Affected by a rare genetic skin condition known as Albinism, Michael fascinated the selectors with his vocally flawless performance of Adele's Someone Like You and earned himself a golden ticket fast tracking him to the TV show.

Speaking on the trials of his skin color, he said “it has brought me some downsizing but I never let it weigh me down, with every challenge I strived harder and I am glad that my fighting spirit has earned me a golden opportunity to be on Star The Winner Is”.

Benin city, the first stop for the auditions delivered amazing talents one of which was a sassy 20 year old, Jahtell Ilem whose vocal prowess captivated the selectors beyond words.

Amongst the incredible talents that the city of Abuja rendered was 20 years old Bigwan Faith, who works as a day security man in Lafia. With a big voice, the selectors had no choice but to put him through to the next round.

Desmond David one of the contestants in Port Harcourt left the selectors spellbound with his astonishing rendition of Avicii's Wake Me Up earning himself a gold ticket.

Tokunbo Adodo, Marketing Manager Star, Goldberg and Export expressed his excitement about the auditions, he said, “The regional auditions offered a grand kick- off to the maiden edition of Star The Winner Is”.

“The variety of vocally talented contestants that were harvested is an indication that the show itself will deliver nail-biting and a suspense filled experience guaranteed to keep viewers on the edge of their seats through every episode of the show”, added an elated Tokunbo.

The auditions train made its first stop in the ancient city of Benin, and moved to Enugu, Port Harcourt, Abuja and finally the last stop, Lagos.

Producers of Star The Winner Is say the show is expected to premiere soon and will be broadcasted on TV stations nationwide.

REGISTRATION TABLE FOR STAR THE WINNER IS ABUJA AUDITIONS

STAR THE WINNER IS LOGO