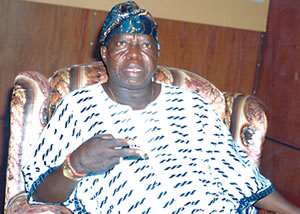 In February 2014, the four-year power tussle in the leadership of the Association of Nigerian Theatre Arts Practitioners (ANTP) between Dele Odule and Victor Ashaolu was settled by a court judgement, which favoured the latter. This did not go down well with the former, who later went to form another association along with some other veteran actors in the Yoruba sector of the Nigerian film industry.

Some days ago, Nollywoodgists.com had a brief chat with Lere Paimo, also known as Eda Onile Ola, who is a veteran actor in the Yoruba movie industry. In his assertion, the iconic actor disclosed that TAMPAN can be likened to the Biblical prodigal son, who left his father to sojourn in a foreign land, but later returned to beg his father after he realized his mistakes.

“TAMPAN is still our child,” Lere Paimo asserted, “they will still come back because the problem that caused their breakaway from ANTP is a family issue. When a child fights his father and moves out of his house, does it mean he is no more his dad's child?,” the actor queried.

“We (ANTP) will take them (TAMPAN) back when the return to apologise for their wrongdoing. You remember the story of the prodigal son in the Bible,” Lere Paimo told Nollywoodgists.com. He urged members of the group to retrace their steps in order not to bring anger on themselves because “Hubert Ogunde would not be happy that the group (ANTP) he laboured to establish has been disassembled by those who should know better. ANTP is the body set up by our fathers in the Yoruba movie industry.”

Husband Snatching is Your Trade – Stella Dimokokorkus Fires Back at Nuella

I'm Confused In Picking A Wife--Pawpaw

Hottest Photo Reports
Catch up with all the political quotes from our politicians.
Advertise here
More Wazobia nollywood
ModernGhana Links
Jo-anne Reyneke returns with new cast Owen Sejake and Motlatsi Mafatshe
Accelerate Movie Night: Here’s All That Went Down At The Accelerate Screening Of Sugar Rush Movie
Actress, Ebella Okaro Drags Colleagues to Father-in-law’s Burial
Pa Kasumu Set to Travel to India for Medical Check-up
I Need More Money—Yoruba Actress, Aishat Abimbola
I Will Soon Be Getting Married But Not From Nollywood…….Baba Suwe
I Never Wanted To Remarry, But...—Foluke Daramola
Ngozi Ezeonu For Prestigious Chieftaincy Title In Asaba
MARRIAGE IS NOT ON MY CARD NOW!! I won’t take nonsense from anyone ….Iyabo Ojo
TOP STORIES

Officer arrested for forcefully kissing the thighs of woman ...
54 minutes ago