What Happened between Me and Prophet Ajanaku ––Tope Alabi 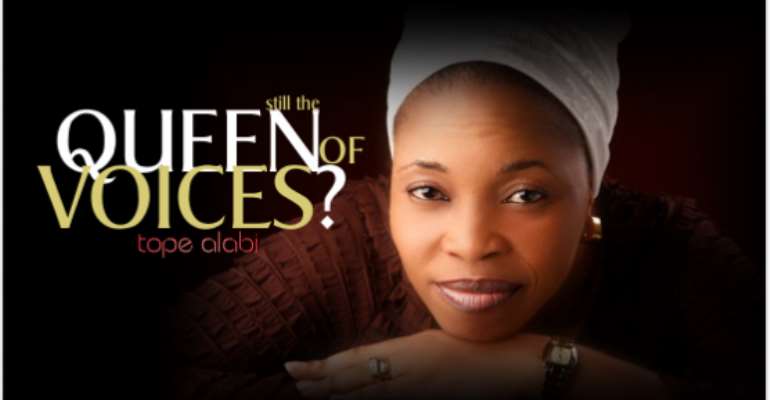 The controversy between gospel singer Tope Alabi and her late "Spiritual Father" Pastor Ajanaku is one that a lot of people want to know the truth about. Tope Alabi shares some with The Punch in this chat:

Your husband has been supportive; he is even your manager...

He is no longer my manager. I have a new manager. He is the marketer now. He is my boyfriend and the father of my children. He is the small boy in the house that must eat first even if no other person has eaten.

But most men don't want their wives to be in the spotlight, how come he supports you like this?

I just thank God for his life. You can imagine, when we go for programmes, I would be given a seat in the front row while my husband would be given a seat at the back. Imagine! I would always tell him to come and sit in front so I can go to the back but he would never agree. He would ask me if he was Tope Alabi. God has been guiding us. How would I have managed without a husband like this?

Another story that generated some kind of controversy is the issue you had with the late Pastor Ajanaku, did you ever make up before he died?

On that issue, I would rather say no comment. When God is working in your life, anything can happen along the line. The Israelites faced turbulence and eventually got out of it. We need people who are spirit-filled to just fold their arms and watch what God will do.

Some people say you are happy he is no more...

God doesn't like anybody who rejoices over a friend or enemy's death. I cannot be an enemy of what God created. I can only be an enemy of God's enemy. If you don't like God, certainly, I will not like you. But I still say no comment on that issue.

Does it mean you will not tell us what really caused the problem between you two?

But we learnt he anointed another singer as his spiritual child and it got you so upset...

But did you feel bad that he replaced you, even if you weren't there, you must have heard it?

I cannot feel bad. I didn't feel bad. I can bring somebody today and I decide to bring that person up. Anybody is free to do whatever he/she feels like doing.

We learnt you also stopped attending his church…

Actually, I was never a member of his church but people don't know this. I am just a woman who loves to help ministries. I go to the church and I give money, not small money. I can work for six months and I take my tithe to him just to bless his ministry. I do that in other ministries. I can minister in churches without collecting money. I know what I have passed through. I know where I am coming from. I want to bless God and thank Him.

The first day I ministered in his church, he gave me money but I didn't collect it. I never collected money from him in my life, but I have donated millions to his church and so many other churches. I have so many people living in my house that I don't even know their parents; and I just help them. I pay their fees. My husband helps the widows, we donate to orphanages. We just want to help.

How the entertainment industry fared in 2013