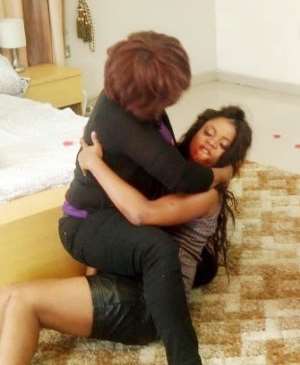 Well, it is not what came to your mind after reading the caption, but any moment from now, a new movie titled Eja Nla (literary means Big Fish" will hit the shelves as top Yoruba actors and actresses recently sweated it out on location for the movie, written and produced by fast rising actress, Oluwaseyi Edun otherwise known as Shai Ashaby.

Bimbo Oshin and Edun were said to have fought dirty over a man who played the character of Bimbo's hubby and she suspected Edun to be rollicking in an affair with him in the yet to be released action movie which promises to be a blockbuster.

Eja Nla was directed by Taiwo Oduala and features Odunlade Adekola, Muyiwa Ademola, Jide Kosoko, Damola Olatunji, Bimbo Oshin, Oluwaseyi Edun and many others. Below are the location pictures.

2022 Budget brouhaha: Cooperation has suffered and will cont...
53 minutes ago