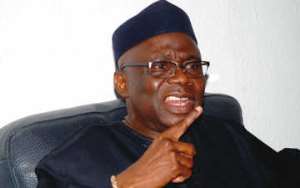 I'm sure the name is well known in Nigeria, fiery General Overseer of the Latter Rain Assembly, Pastor Tunde Bakare is the one we are talking about. Last Sunday, the man of God once again delivered another scathing sermon, in which he clearly stated that Nigeria needs complete cleansing to get rid of bad leadership.

The sermon, delivered on Sunday February 3, centred around the state of the nation. He said: “Nigeria needs total cleansing. We need what happens in Ghana to happen in Nigeria to send a shock wave to the corrupt people in the country. The corrupt people will think of the grave consequences of their actions before they embark on corruption. The entire system is rotten. We need more than overhaul of the system. We need a constitution from the people; the one that is not imposed on them.”

Pastor Bakare cited the case of Yakubu Yusuf, former director of the Police Pension Board, who admitted stealing N27billion, would escape with a sentence of two years in jail with an option of N750,000 fine that it's unthinkable for such a judgment to be passed in a country that respects rule of law. “Nigeria is hellish for poor thieves and magnanimous to big thieves,” he said.
Bakare also expressed his support for the planned mergers between political parties saying “We want good people to emerge. Else, we will be shooting ourselves in the leg again. I am for the merger, if it is for the rebuilding of the nation.”

Bagbin fly to Dubai for medical review after budget rejectio...
9 minutes ago