From screen to the political turf 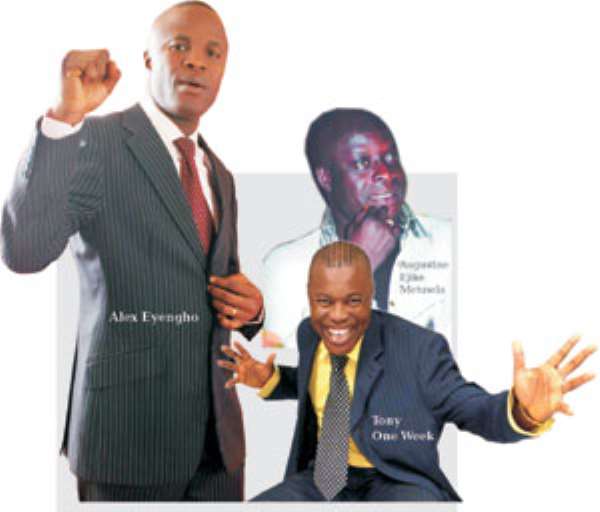 History is about to be made come next Tuesday as three notable movie makers file out as candidates for the elections into the state House of Assembly.

The practitioners are Mr. Alex Eyengho, former president of the Association of Nollywood Core Producers(ANCOP), veteran actor Augustine Ejike Metusela and actor-turned-musician, Anthony Muonagor better known as Tony One Week. The trio, determined to make the difference in the nation's political climate, joined the race as a means to give voice to the entertainment sector.

Ahead of the election, HVP takes a look at the candidates and their political manifestoes.

Former president of the Association of Nollywood Core Producers(ANCOP), Mr Alex Eyengho is another notable film maker who is all out to make the difference in politics.

According to the film maker, he joined politics to rescue his people from under-representation and backwardness. He is the Action Congress of Nigeria, ACN, candidate for Warri South_West Constituency, in the Delta State House of Assembly.

Eyengho's journey into politics began when he yielded to the pressure from his teeming admirers and kinsmen recently by throwing his hat into the political ring.

A notable film maker, Eyengho said “I'm on rescue mission. I am humbled by the clarion call on me by my people to come on board and rescue them from under_representation and total misrepresentation in the Delta State House of Assembly. Particularly in the last eight years. I am left with no other option than to yield to thevoice of my people.

I am the much_awaited voice, the uniting force on a rescue mission for the oil_rich but scandalously underdeveloped Warri South West Constituency.”

“My venturing into politics was informed by the need to prove to the world that something good can come out of Nollywood.”

“Gone are the days when people see the entertainment sector as a place meant for drop-outs and never-do-well people in society. I'm going to prove to the world that Nollywood habours the best brains in the country today.”

A thoroughbred grass root politician and former students union leader on campus, Metu is also a veteran actor and a businessman. He is not a new comer in politics.

His roles in monster hit movies like: “Rattle Snake”, 'Taboo”, “Battle of Musaga', “Father Tansi” and several other blockbusters, is still fresh in the minds of movie buffs.

Metu who hail from Anambra State asserts that he joined the race to champion the cause of the people of his constituency.

“ I'm not going into politics to either victimise anybody or to be selfish. Rather my intention is to use my position to project the interest of my constituency. I'm going to operate an open-door policy.”

Top Nollywood actor-turned-musician Anthony Muonagor better known as Tony One Week is undeterred in his desire to get involved in politics.

He will be among the three lucky artistes who will slog it out come Tuesday election with the candidates of other political parties as he vies for a seat in the Anambra State House of Assembly.

Tony One Week picked the ACN ticket to represent the Idemili North Constituency, in the Anambra State House of Assembly.

A Mass Communication graduate, Tony One Week began his career as a talk_show host for the Anambra Broadcasting Corporation and later as a newscaster at the Nigerian Television Authority Channel 8, Enugu.

In 1998, he debuted a track titled 'U Go Bow' and in 1999, directed his first movie titled 'Holygans'. Since then, the self_acclaimed gyration master, prefers to be referred to as an entertainer.

On his mission into politic, Tony One Week declares; “I got involved in politics to use my fame and connection to bring about the much needed change to my constituency.”

“I will bring to my people the dividends of democracy that had been consistently denied them since the beginning of this democratic dispensation, if elected into the Anambra State House of Assembly.”