Afanyi Dadzie Writes: Your male friend proposed to you and so what? 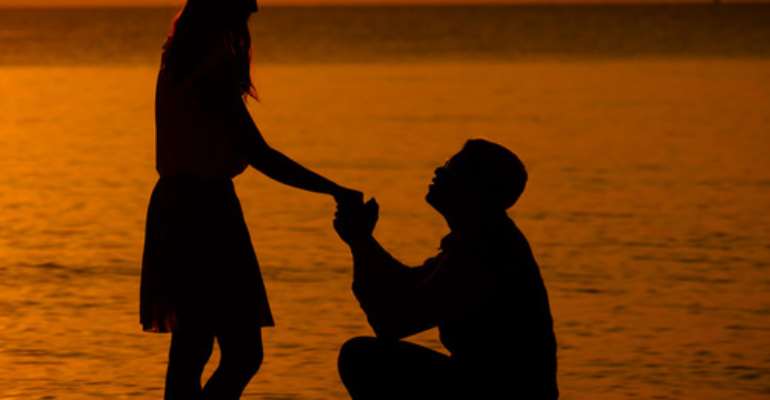 I am a bit bewildered about this unwritten and silent rule that almost makes it look like it's a taboo for a man to propose to his woman friend.

And I notice this is a big deal for some women to the point that; they even consider it offensive, and they can get upset with the male friend who proposes.

I thought that the best thing for anyone to do is to love or marry people they know very well and are quite familiar and comfortable with. So if a man has built that acquaintance with a female over a considerable period; what's wrong if he proposes love?

Yes; I have heard arguments that, for women who find this kind of proposals a big deal, the fact that they have become too familiar with a male friend; they sometimes open up about their secrets and other sensitive issues to them, and for that reason, they wouldn't want to date such persons who know all about them.

They will instead prefer to keep them as friends that they can always trust to fall on for advice and other forms of help when the need arises. I don't find the above reasons even strong enough for some women to reject proposals from trusted male friends; and rather opt for 'strangers'.

I think that women should equally treat proposals from male friends as those from 'strangers', and that proposals should be accepted on merit, compatibility and above all love.

My thoughts about this subject were relighted last night; and I was moved to put it in writing, when I came across a post by a Facebook friend, Theresa Dekpey. Theresa posed this question on her Facebook wall. “Can a lady have that one male friend who will never propose love to her?

In responding to one of the comments to her post, Theresa also said that: “I have never had a male friend who has lasted up to a month. They end up proposing, and when I decline they tend to hate me and will never talk to me.”

Theresa's question somewhat made it appear as though it was inappropriate for her male friends to propose to her.

Reading the responses to her post, I noticed it wasn't one-sided. They answers were 'yes' and 'no'; and they often came from the men.

One guy said: “A guy keeping a female as a friend is like a cat keeping a mouse as a pet. One day, when the mouse least expects it, the cat will eat the mouse. My grandma would tell you ‘ɔbaa adanfo ne ɔbaa’, which in the Akan dialect means (A woman's friend is a woman).

Let me also add that, I have often heard the question; 'How's a woman's friend a man' or vice versa.

I have concluded that, these mind-sets, which many people, especially males hold on to, is totally wrong and very problematic. And my answer to Theresa's question, “Can a lady have that one male friend who will never propose love to her is a big 'YES'.

It is 'YES' because it is not in all cases that men propose to female friends. It is the men with the skewed mind-sets that a man can't be a woman's friend; who will always want to take advantage of female friends even when there's no genuine love.

Excuse me to say that this mind-set is often held by men with very little self-control who also lack discipline or sometimes lack the courage to hit on other women outside their circles; and so they will easily propose to that female friend who is closer and familiar.

However it must be stated that, women and men naturally attract each other and so some men can genuinely develop love for a female friend over a period.

Like the saying goes 'sometimes the best friends are the best couple', so there's absolutely nothing wrong for a male to make such a move on a female friend who's available, once the proposal is backed by a good intention for the long-term and not just for momentary fun.

Nonetheless, I find it a bit problematic when a male friend in a short time of knowing a female, begins to propose. Such proposals I believe may not be genuine.  I have kept female friends; some for several years; and even though I was single at some point, I didn't propose till they got married; and they haven't stopped being friends.

But I must add that, it was not in all cases that some of these friends were single; they had been taken; but I still valued the friendship because I don't have the mind-set that a man can't have a woman as a friend.

For some who were single however, I proposed to a few after years of friendship; which I felt had developed into love. I had become familiar with them and knew them so much. Besides; it’s better dating someone you know than a 'stranger' that you need time to start afresh.

And my intentions for those few proposals were good and for the long-term. And I didn’t see how I was deliberately going to hurt people I called friends if they had accepted me. But for their own individual reasons, none of them accepted my proposal. For some, it was inconceivable to date me, after building years of friendship to a certain level where they almost saw me as a ‘BROTHER.’

Others made me know that they felt nothing for me beyond friendship. Seriously; it's heart-wrenching to hear such words from people you call friends; and so when such rejections come, naturally you find yourself drifting away; and the friendship often doesn't become the same again.

In my experiences, I have often taken time off from the friendships to recover from the shock because there's even some kind of shyness and embarrassment you feel especially when that female friend finds your proposal awkward or even offensive as if you've committed a crime.

But eventually; after a while, I return to my normalcy with these women and life goes on; and that’s maturity. Therefore, my view is that; any male who calls himself a friend to a female, and decides to hate them because they turned down their proposal, didn’t really have good intentions; and to some extent, lacks maturity. For the reason that; in all of my experiences, I have learnt that, as a man, you can have a very good and cordial relationship with a female friend; but if you try a love relationship or marriage, you can turn out as terrible lovers or couple.

And so you always need to be very sure and read between the lines not to confuse the friendship easily to mean compatibility in love or marriage.  Just that sometimes in that friendship, women can unconsciously give you signals that can make you think that they want more than friendship from you, only for you to propose and then they turn you down.

It's a painful experience; but I have matured to understand that one cannot have a romantic or sexual love as a reward for friendship. People must naturally and consciously desire that deep love for you to accept you beyond a friend; you simply can't force it or expect it to be gifted to you because of friendship, else the regrets can be irreparable.

Let it also be known, that the point about proposing to a friend; isn't only a one-way affair. There are also women who make advances at male friends who even have no intention of proposing love to them, but only want them as friends.

I have had that experience from a female friend who later chose to stay away from me in disappointment and anger. I understood her feelings; and I made sure I got closer to keep the friendship even though she was being difficult. In the end, she found a partner, and I attended her wedding and she was happy to see me. We are friends; and she shares sensitive things about her marriage with me for counselling.

Appallingly; there are even women who also express disappointment in their male friends for not proposing to them even though they showed them a sign that they wanted more than friendship; and this often happens after that male friend has found someone else.

Finding love or choosing a partner, must have no strict rules else it ceases to be what it ought to be. Sometimes all that you seek for is the one closer; yet you look faraway waiting for the one that never comes.