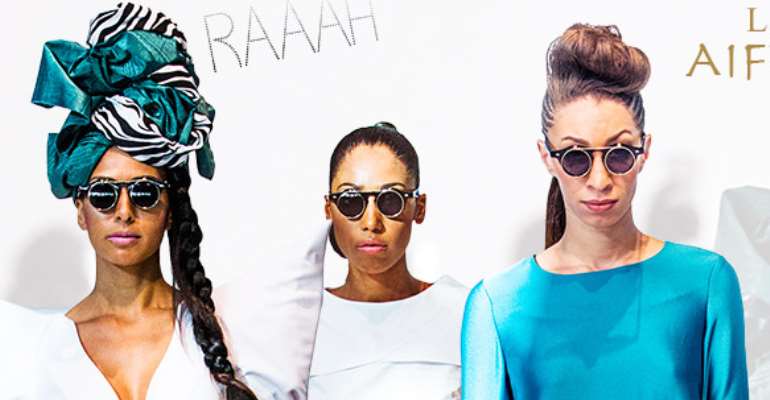 London, 26 November 2014 – Emerging London-based label RAAAH is getting ready for its debut in Nigeria during Africa International Fashion Week 2014 taking place between 2-6 December 2014 in Lagos, Nigeria.

Following a successful exhibition at UK's biggest trade expo Pure London and runway debut with her first collection 'Fly/Fly Higher' at Africa Fashion Week London in August, RAAAH first showcased on the continent in designer's native Zimbabwe during Zimbabwe Fashion Week 2014 where she was nominated for the Designer of the Year Award.

The emerging designer, recently named as one of the “15 African Women to Watch in 2015” by New African Woman magazine, has received much interest from Nigerian media, buyers and celebrities alike, with Tiwa Savage rocking her Loosen Up dress on the red carpet and more recently Seyi Shay wearing the Yesss bodysuit on the set of her video shoot.

“I am very excited and just cannot wait to showcase in Lagos, Nigeria. It is one country that has been at the very top of my list to showcase at. Who wouldn't want to, especially if you're African or of African Heritage? Lagos, in my opinion, is proving to be one of the most biggest fashion capitals in Africa and they are holding successful Fashion Weeks at international level so it's an honour and a privilege to be showcasing at AIFW,” said Rahima of her upcoming Lagos debut.

Lagos will see RAAAH showcase brand new pieces from her upcoming Pre-Fall collection as well as some old favourites from 'Fly/Fly High'.

“I will be showcasing a few new pieces from my upcoming pre-fall collection entitled 'Argento' which I can't wait to unveil in Lagos, a city full of fashionistas who appreciate quality and femininity,” Rahima adds.

'Argento' means silver in Italian, one of Rahima's favourite colours. “It's a colour that is exceptionally shiny and it expresses everything I want out of life, and a reflection of how I was feeling when I started brainstorming on this collection. Silver is how I want most women to feel – vibrant, stylish and classy,” the designer explains.

With tones of silver and gun metal at the forefront, the silhouettes once again are inspired by feminine strength which are fast becoming RAAAH's driving design aesthetic, a blend of feminine fluidity with strong structures to signal powerful, confident women. The designer makes use of silk noil, silk bounded lace in pink and silver which give a subtle nod to African print, silk lurex, and fine brocade to create a range of contemporary pieces.

Africa International Fashion Week organised by the International Business Consortium Nigeria, organisers of Africa's prestigious model search and owners of Ecowas Fashion Week, in collaboration with Vogue Talents and in partnership with Studio 24 will also see the launch of “Scouting for Africa” competition sponsored by Access Bank PLC Nigeria and Baileys, aimed at emerging womenswear, menswear and accessories designers of African descent.

The shortlisted designers set to appear in Vogue Italia in 2015, and the winning designer presented with the opportunity to showcase their designs at Palazzo Morando in Milan in September 2015.

Africa International Fashion Week will take at the Grand Ball Hall at Oriental Hotel in Lekki in Lagos, Nigeria, with an awards evening sponsored by Baileys targeting women who have made their mark in the African fashion industry.