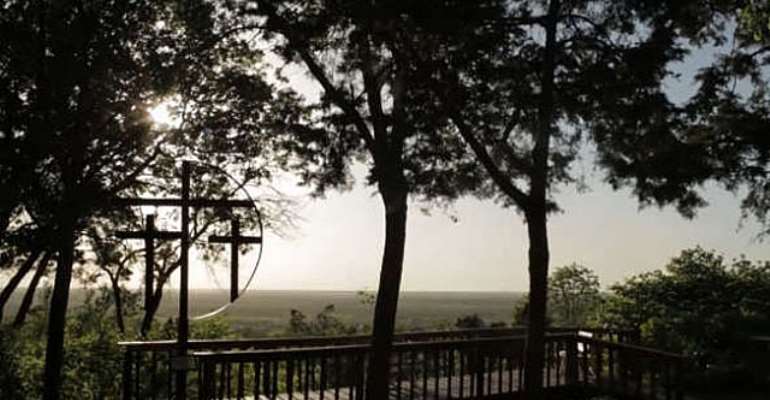 Miracles happen on a regular basis at Prayer Mountain in Dallas. ( CBN )

Just above the hustle and bustle of downtown Dallas stands a place called Prayer Mountain. It's the site of mysterious healings and answered prayers.

Take for instance, Vivianna Ruiz. At the young age of 6, she faced a diagnosis of leukemia.

“We weren't saved,” Ruiz recalled. “We were just going through life and we didn't know what was happening. I was in the first grade when I was diagnosed, and as you can imagine our life just kind of completely crashed.”

After the diagnosis came chemotherapy. Ruiz could barely stand the pain.

“One day later in my treatment I was feeling really, really sick,” she told CBN News. “They had already done everything they could do. You feel so sick from the cancer already and then the chemo—it kills everything, not just the cancer. The doctor said, 'There is nothing else we can do.”

Miracle on the Mount
Around the same time, a family friend persuaded Ruiz's mom to bring her to Prayer Mountain.

“She brought me in. She sat on that side of the pews and I was asleep and my mom says the whole church stopped. Pastor Robert stopped,” she recalled.

“The congregation had everyone come and they all laid hands on me and prayed for me. I was asleep through all of it and when I woke up … my mom says I was completely better, a new little girl, none of that was affecting me,” Ruiz said.

Thanks to that “miracle on the mount” the entire family would eventually come to know Christ.

Miracles happen on a regular basis here, according to Prayer Mountain founders Pastor Robert Summers and his wife JoAn.

“There have been people healed here, and we didn't know they were healed until they came back and gave their testimony much later,” he said.

“You know I was here last year from North Carolina and the Lord healed me. I don't have cancer anymore,'” he continued, recounting past conversations.

The Summers discovered Prayer Mountain nearly 30 years ago. They say the Lord told them to buy the mountain and build a prayer center at its summit. Since then they have added a garden, prayer rooms and a prayer deck overlooking the city.

Lord, Teach Us to Pray
The word “mountain” may be a bit of a stretch. Its peak stands at about 800 feet, but when you reach the top, the views are spectacular.

Several years ago, JoAn Summers and her mother were featured in a 700 Club story called “The Seadrift Intercessors.” It told the miraculous tale of a group of World War II soldiers, whose survival she credits to the power of intercessory prayer.

“My pastor Brother Bob put up a big board, a picture frame, and had our parents to bring the pictures of the members of our congregation. The ladies came together at 10 o'clock every single morning and they prayed for these 52 young men. Everyday,” Jo-An recalled.

All 52 men returned home safely. She now uses that experience to teach a new group of intercessors, including politicians.

“The last 20 years that we have been here in Dallas every mayor, or want-to-be mayor, has come here and asked us to pray with them,” Pastor Summers said.

They also take a special interest in the spiritual needs of the city's young people.

“What we couldn't see when we were at Dallas Baptist University is that God was weaving us into the fabric of this mountain. When we agree in the place of prayer it releases power,” said Paul and Britainie Nelson, the youth ministers of the Mountain Creek Church.

Just ask Ruiz. She is 20 years old now and gives credit to God and to the new generation of intercessors.

“I was healed. Hallelujah! You know, by His stripes I was healed,” she said. “I am so thankful for the doctors and the people that helped and everything. And for all they have done, they were just so supportive. But I wouldn't be here without the Lord today. The church would constantly tell my mom she will not die but will live.”