Growing Up As A Girl In Rural India: What Does It Mean? 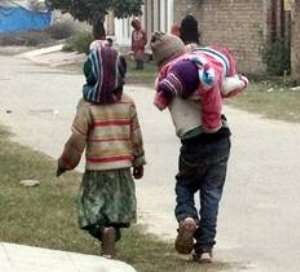 Adolescence or teenage is that critical phase when one transitions from childhood to adulthood. It is marked by important biological changes and the onset of puberty. This 'growing up' is also about experiencing the joys and challenges of youth. However, for many girls especially those living in rural India, growing up in patriarchal socio-cultural set ups also signifies the tightening of an increased set of regressive controls on their lives, including the denial of going to school. Even after more than a decade of the passing of the Right to Education (RTE) Act in 2009, 37% of girls of age 6 and above in rural areas have never been to school, as per National Family Health Survey (NFHS)-4 data. Also nearly 40% of rural women aged 15-49 years are illiterate (as against 17% men) and even among those who are literate a mere 27% have 10 or more years of schooling.

This denial of the basic right to education to young girls simply helps to perpetrate regressive gender practices, weaving a web of economic, cultural and social controls and restrictions on their lives, as they transition from childhood to adolescence and beyond.

A recent study conducted in rural parts of Jharkhand state of India highlights the dreadful consequences of the interplay of these factors, resulting in an intensification of regressive norms and practices impacting the lives of adolescent girls.

Nalini Khurana, Senior Research and Programme Associate at International Centre for Research on Women (ICRW), Asia, presented the findings of this qualitative and quantitative study (conducted with adolescent girls and boys and their parents) at the fourth online session of the 10th Asia Pacific Conference on Sexual and Reproductive Health and Rights (APCRSHR10 Virtual).

Education: Jharkhand is a backward state of India where 49% of the rural women (aged 15-49 years) are illiterate and only 20% have 10 or more years of schooling. Also, the percentage of girls over 6 years of age in rural areas who ever attended school is 56%.

Study results show that school drop-out rate is high, rising sharply after age 15, with only 50% of 15-18 year old girls in school. Barriers are many-expenses; school too far; domestic work; girls’ education is still not a priority for many parents. Gender roles influence family decisions around allocating resources for the girls' education. Due to limited resources parents rather invest in educating their sons - who are supposedly the future breadwinners for the family - rather than educate their daughters who will get married off into another family and will primarily assume a domestic role there.

This is what some of the female respondents had to say:

- "My family believes that what is the use of education when girls are destined to get married and to not have a career. Being able to write one’s name and address is enough."

- "Parents think that if girls study more, they will get spoiled and will do of their mind and bring infamy to the family"

- "What is the point of studying more, if girls are destined to get married and do kitchen work only?"

90% of the girls actually believed that a woman's primary role is that of a caregiver. Their domestic roles in the household start to set in at a very early age and become increasingly significant by the time they are 15. This is another reason for them to start missing school and eventually dropout.

Far off location of schools, especially those catering to grades 9 to 12, is another contributing factor. Parents not only fear that their daughter might experience harassment or violence on the way to school but are also worried that she might meet a boy on the way to school and develop a relationship with him, she said to CNS (Citizen News Service). This whole idea of protecting girls from such so-called transgressions of social norms is one of the push factors for older girls to drop-out from school.

Mobility: As girls grow older, their movements outside the home are restricted. They need permission to go to most places and must usually be accompanied. While it is acceptable for older girls to go out for certain household work or visit certain places (like an 'Aanganwadi' centre - to meet a frontline health worker for accessing some resource related to their health or nutrition), but they need permission to go to a park or to a playground or to even a friend's house. 74% of the girls felt that a family's honour lies in the girl's hand, and 33% felt that 'good girls' do not roam in public spaces. No wonder that the older girls were more likely to have poorer mental wellbeing, with 31% of them feeling depressed and 26% having feelings of dread.

Marriage: In India, 32% of the rural women aged 20-24 years were married before the age of 18. But for Jharkhand this figure is still higher at 44%. Study results show that the average age of marriage is 16 years. They also point out that there is a clear link between education and marriage as school dropout significantly increases the likelihood of marriage. Girls who dropped out from school were 3.4 times more likely to be married early on. As soon as a girl drops out from school, marriage is usually right around the corner. Girls have very little voice and choice in decisions related to their marriage - when to get married and to whom (and if to get married or not). Less than 15% of them had a say in deciding about the timing and the groom. Fathers are the key decision makers and daughters cannot oppose parents' decision.

Sexual and other forms of gender-based violence: It occurs in various forms and girls are often blamed for it. 50%-70% of the girls indicated a high likelihood of sexual harassment, as well as physical and emotional violence in different spaces which they usually frequent. Violence was seen as a gendered form of control, within the household, in schools and in public spaces. Victim blaming and violence justification is common.

Younger girls lack information related to menstruation. And even the older girls believe in different kinds of misinformation, myths and stereotypes. Most girls learn about menstruation only after attaining menarche. Nearly 40% of them miss school during menstruation, particularly due to pain and/or fear of staining. Only 39% of the rural girls aged 15-24 years in Jharkhand use hygienic products (like sanitary pads) during menstruation. 82% of the female respondents believed that menstruation cleans the body of dirty blood, and 66% said that menstruating girls should not attend religious functions. Such misconceptions are not uncommon even in cities.

Adolescent girls enter into marriage as early as the age of 16, with very little knowledge and understanding of sexual and reproductive health. They lack information on contraception and pregnancy. Many of them think that contraception is wrong and girls who use contraception are promiscuous. There is almost zero communication on pregnancy and contraception. Girls feel embarrassed to speak on these issues with their parents, siblings or teachers, or even with their friends. The only girls who sometimes do discuss these topics are married girls - they discuss it with their husbands and that too usually when the husband initiates the discussion.

Growing up as a girl is not easy in India, especially in rural India. Problems are many but they are not unsurmountable. They have to be addressed at multiple levels with multiple actors. Girls must be at the centre of this approach but it is also essential to engage with parents, families, and the community, as well as with institutions and other structures that govern their lives. There is need to actively engage with men and boys to deconstruct some of the harmful norms and to help them understand and envision a different life for their daughters, sisters and wives.

But the first and foremost duty of the state and the family is to ensure that all girls go to school and get an education, and are not married off at an early age. This, coupled with having culturally appropriate interventions for creating an enabling environment and safe spaces for girls to have correct information around these issues as well as access to sexual and reproductive health services, will go a long way in nurturing the overall physical and mental well being of our girls.

They too have the right to enjoy the fruits of sustainable development where no one is left behind.

(Shobha Shukla is the founding Managing Editor of CNS (Citizen News Service) and is a noted health and gender justice advocate. She is a former senior faculty of Loreto Convent College and current Coordinator of Asia Pacific Media Network to end TB & tobacco and prevent NCDs. Follow her on Twitter @shobha1shukla)