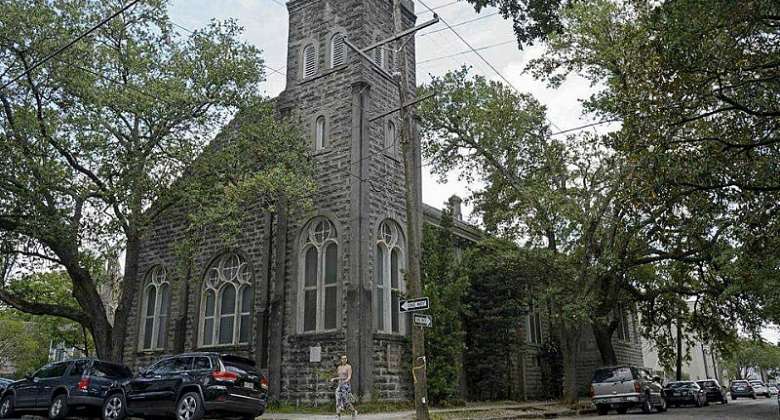 The first picture is a chapel which has just being acquired by Beyonce at $850,000. The chapel, which currently measures at 7,500 square feet, was originally built in the 1900s but has been reported as out of use due to the passing of several members. No one knows as yet what Beyonce will use the building for.

The second picture is the "Bible" of "The National Church of Bey“, an organization that recently formed the new religion called Beyism (sounds like Twi word " BEYISEM, init?) based on pop star Beyoncé Knowles, based in Atlanta, Georgia. Their "Bible" is called "BEYBLE"

Now the third picture; on Wednesday 25th April 2018, "The Vine", contemporary worship service that combines progressive theology and pop music, held a special mass devoted to Beyoncé’s music and accomplishments. The sermon was delivered by Rev. Yolanda Norton, who also teaches a course called “Beyoncé and the Hebrew Bible” at the San Francisco Theological Seminary.

Beyonce is yet to release an official statement to announce her association or dissociation from the second and third. But one thing is sure- BEYONCE is being worshipped and its not a surprise because as humans we have the tendency to worship people for their outstanding talents; we worship the phenomenal. Beyonce can't be blamed since she hasn't accepted this worship though unverified sources have it that she is associated with Satanism

Note- Photos used unless otherwise stated does not belong to modernghana.com

Hottest Photo Reports
Catch up with all the political quotes from our politicians.
Advertise here
More from Social Issues
ModernGhana Links
Privacy Notices – what to look out for when you read
15 safety tips to prevent online abuse in society
Common reasons why so many people fall prey to online scams and how to avoid falling victim
TOP STORIES