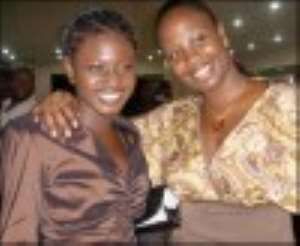 Star actress Nadia Buari seems to be distancing herself from her home-based fans, her continuous failure to attend premieres of movies she played major roles in is enough evidence to suggest so.

Last Saturday, the actress again disappointed a section of Ghanaian movie enthusiasts as well as her own fans by failing to show up at the premiere of the new blockbuster movie, 'Sin Of The Soul,' in which she played a lead role.

Nadia's colleague stars such as Majid Michel, Ekow Smith, Roger Quartey, Eve Asare, Martha Ankomah, Rose Ntrissah, and Helen Ashanti among others who were part of the cast, on Saturday thronged the National Theatre to give the premiere a star-studded look.

However, the light-skinned actress was nowhere to be found with the usual excuse that she was out of the country.

However, BEATWAVES has gathered that the actress was in town at the time the event took place. She was spotted driving a black Cherokee Jeep around the Kawukudi area near the Accra Girls Senior High School.

That was not the first time the actress had ignored a premiere. A couple of months ago, she was expected to be present at the premiere of 'The King Is Mine' by Venus Productions, but she did not show up.

Fans who wanted to see her and get some autographs and pictures with her got disappointed, with some wondering why she could not make time to attend premieres as pertains in every movie industry.

“What at all is she doing out there that she cannot come to the premiere?” a fan fumed.

Anyway, Nadia is not the only person taking the same steps as Kofi Adjorlolo also seems not to be punctual at premieres in recent times.

Meanwhile, Saturday's premiere was indeed something to write home about even though the patronage wasn't that encouraging. Stars including those who were not part of the cast came in their numbers.

'Sin Of The Soul' is a must-watch movie. The storyline is touching, and movie enthusiasts must make it a point to see it for themselves.