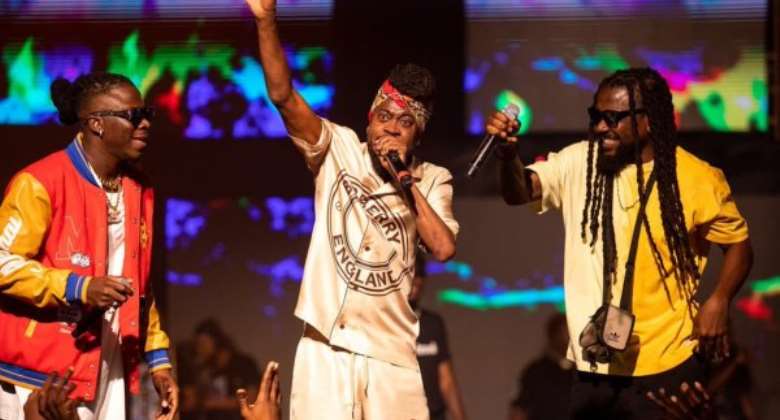 It was a thrilling performance from Stonebwoy and Samini at the 2021 Bhim Concert as both artistes together with Jamaican Dancehall Legend Beenie Man dazzled audiences with some spectacular showmanship.

The two Ghanaian Reggae/Dancehall artistes did put aside their differences and together with Beenie Man, thrilled the hundreds of fans with electrifying performances as they got everyone dancing and jamming to their tunes at the Grand Arena, Accra International Conference Centre (AICC) on Tuesday.

Stonebwoy and Samini's 'beef' started early this year, after Samini said in an interview, "Stonebwoy had not appreciated him enough after pushing hard to bring him to the limelight.

Stonebwoy also reacted to the comment which brought about a social media banter between the two talented acts.

The legendary dancehall musician, Samini, during his time on stage said “It feels good and nice representing the Bhim Nation on this stage”.

Stonebwoy while performing with him also made a comment that the relationship between himself and Samini cannot be separated by anybody.

“You can't separate us because it's God almighty that put us together, a big man is a big man,” said Stonebwoy.

Stonebwoy is also expected to show up at Samini's Experience Concert billed for Friday, December 24, 2021.