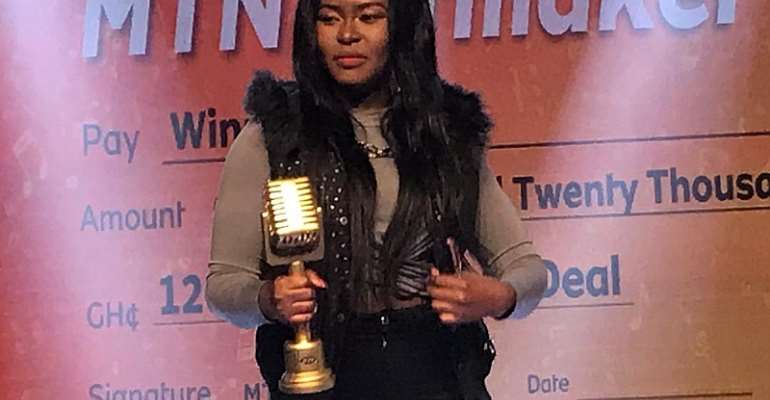 Singer Adepa has been crowned as the winner of the Season 9 edition of the MTN Hitmaker music reality show.

The young gospel singer has dazzled judges with her performances since the live shows of this edition of the life-changing reality show commenced in October.

At the end of the eviction shows of the season dubbed 'Unlock your Flow' last weekend, Adepa survived to advance to the grand finale alongside Achiaa, Adepa, and Kobby Tuesday.

Today, she put up another splendid performance at the finale held at the Accra International Conference to complement a high earned percentage of votes to emerge as the winner of the MTN Hitmaker Season 9.

For her prize, Adepa has been awarded a GH¢120,000 recording deal and will be working with a top music producer.

Other winners on the night:
Second Place: Koby Tuesday – Received a cash prize of GH¢20,000

List Of Evicted Contestants in the run-up to finals:

On the entertaining night of the finale, past MTN Hitmaker contestants turned stars, KiDi, Mr. Drew, Kurl Songs, and others entertained judges and the audience with electrifying performances of some of their hit songs.

Check out the crowning moment of the MTN Hitmaker Season 9 below:

Meanwhile, BeatMaster Gazy has been adjudged ‘beatmaker of the season’ at the end of the MTN Hitmaker Season 9.