It's High Time We Gave Attention To POETRY---Blakk Rasta 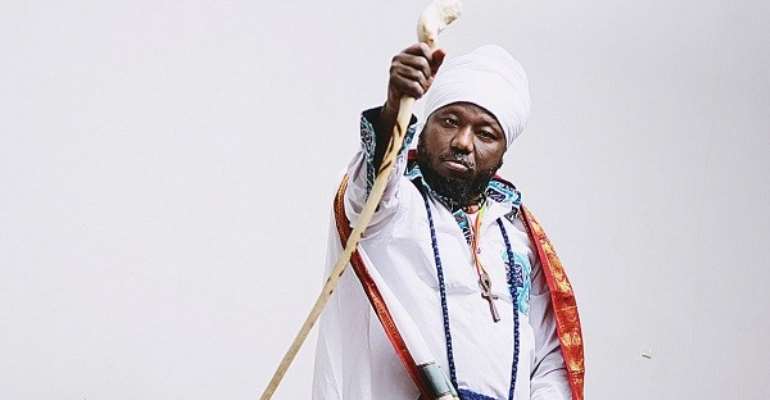 Ghana's award-winning Kuchoko Reggae Master and Poet, Blakk Rasta, is making a strong case for the development of poetry talents as a top priority

ON stage, Blakk Rasta sings and also performs poetry accompanied by the reggae rhythms he crafts to help his audiences better appreciate his often Pan-Africanist messages.

The man has worked poetry into his music since his maiden Rasta Shine album came out 20 years ago and even regards himself as a better poet than singer. That style of poetry rendition over reggae beats is generally referred to as Dub Poetry and has been an established format, especially in the Caribbean and parts of Europe since the early 1970s.

Blakk Rasta, however, firmly believes that whichever way poets decide to render their poetry, it should be possible to get more people to appreciate the art by dealing with issues that resonate with them and also by taking the works closer to where the targeted audiences can be found such as on the streets and ghettos.

Speaking to The Mirror after receiving an invitation to participate in this year’s ‘Dis Poem Wordz & Agro Festival’ as well as the ‘Malcolm X Sol Music Festival’, both scheduled for November 22 in Jamaica, Blakk Rasta said he was happy for the recognition he kept getting for his poetry.

“There is a growing push, spearheaded by the famous Mutabaruka, for what is known as Dub Poetry to be simply called poetry. The notion is that poetry is poetry, whether it is rendered with a certain type of musical accompaniment or not,” said Blakk Rasta.

This year’s ‘Dis Poem Wordz & Agro Festival’ and the ‘Malcolm X Sol Music Festival’ will be virtual events due to the COVID-19 pandemic. Blakk Rasta has 15 minutes to render two poems, one of which will be in pidgin English and the other in straight or regular English.

A graduate in Land Economy from the University of Science and Technology in Kumasi, Blakk Rasta is also a radio presenter and has several albums under his belt. They include More Fyah, Ganja Minister, Naked Wire, Ancestral Moonspash, Kuchoko Revolution, and Timbuktu by Road.

The item that brought him massive international attention was his February 2008 song dedicated to Barack Obama when he was campaigning to be President of the United States of America.

“I think poetry is easier for me to come up with than melodies or rhythms. I go to places where people are not ready to listen to poems. They just want songs so I give them songs. Unfortunately, poetry is not as popular as singing in this our part of the world, so when you do both poetry and singing on a track, the more popular style overshadows the other”.

Blakk Rasta greatly admires young poets such as Rhyme Sonny and Nana Asaase who write some of their works in our local languages. It is an example he hopes to follow soon by writing in Dagbani and Hausa. He is from Tamale.