Shatta Wale Begs Fella Makafui To Go Back To Medikal 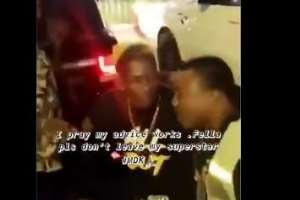 Controversial dancehall act Shatta Wale outdid himself when he sought to reconcile actress Fella Makafui with her ‘boyfriend’ rapper, Medikal.

The celebrity couple are reportedly broken up over a supposed infringement by Medikal.

In a spectacle that thrilled onlookers, the ‘Borjor’ hit singer is seen in a tête-à-tête with the YOLO star trying to intercede for Fella to give the rapper another chance.

After the conversation, Shatta Wale goes on his knees to drive home his pleas. “I dey beg give Medikal,” the singer is heard saying.

A supposed fan who was present at the scene also kneels down saying, if Shatta Wale is kneeling down then they all have to follow suit.

His loyalty was rewarded by his idol with $100.

The Tuesday incident follows a number of public apologies by Medikal himself for Fella Makafui to accept his apology.

“Somebody tell Fella I’m sorry, I know say people go bore me but I still go fight for love, Chuck Norris I still love you, you’re my baby,” Medikal had said in his new song El Chapo.

In a previous video that surfaced earlier this week, the AMG record label signee is seen with some of his friends in Fella’s liquor shop. The actress, looking peeved by their presence, sends them away.