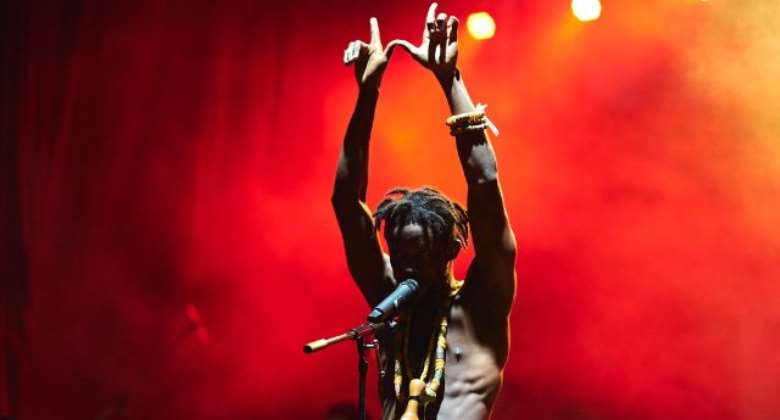 Galvanised by a rich African sound, Ghanaian musician Worlasi parried criticisms with a majestic entrance onto the stage at Alliance Francaise, riding on the back of a white horse, a piece of cloth tied to his waist and a bare chest.

On that warm Saturday night of Worlafest '19, the rows and columns of expectant fans would not be silenced as the audience screamed on top of their voices at the sight of the music sensation’s poetic entrance.

This grand entrance was executed over ‘Woezor’, the second track off his sophomore album ‘WORLA: The man and the god’ released on December 1, 2019. That is how the rest of his enchanting performance took off, with the fans clearly carried along.

The dynamic Senku Band provided a captivating blend of instrumentals harmonised with Worlasi’s energy, quickly switching from his calm persona into a frenzy and a bit of comedy. His live band prowess places him above his peers in an era rather dominated by miming as he employs a blend of English, Pidgin English and some local languages (predominantly Ewe and Twi) to convey his diverse range of messages.

One elated fan said, “I get the Fela Kuti vibe from his performance”… and I agree. The response from the audience during the ‘Fokoo’ performance reflects the controversial nature of some of the works on the album as it calls out the political elite through a melodic rendition of a pseudo-parliamentary setting.

‘Four Years’ reflects a similar sentiment, addressing vote-buying, taxation, corruption and the blind eye that upper echelons of leadership turn to the plights of a helpless citizenry. This, coupled with the artistic value displayed by the unsung hero made the elements of the legendary Osibisa band more pronounced all through the event.

Then, there was ‘Gone Gone’. This masterpiece ushers fans into a period of introspection about forgone socio-cultural values and relevant traditions that have gone stale as a result of the influx of foreign influences.

If @burnaboy is big, @worlasigh must be bigger!
The essence isn't to compare but if the reason Burna has acclaim in Ghana is his music and artistry,way eno be 'nhw3hw3nim', Worlasi should be the most hyped artiste in Ghana right now! #Worlafest #worlamy #YearOfReturn #Africa pic.twitter.com/zHXoe9721r — Andrew Anku (@quekudre) December 9, 2019

Interspersed with some previous hits like Nukata, the refreshing excitement of an unorthodox trend of authentic Ghanaian music seeped through from Chant, Okwasia, We All Go Die and Animate all the way down to Preek and other tracks which collectively make up ‘WORLA: The Man and the god’.

The rapper and singer’s intricate fusion of highlife, hip-hop, afro beats and RnB does not only gladden the heart of the so sophisticated listener, but captures simplistic audience through self-explanatory interludes that throw more light on to concept in each song.

Award winning artiste M.anifest did not hesitate to jump on stage with his long time protégé in solidarity amid a charged atmosphere. The duo thrilled fans with dazzling performance including ‘Cucaracha’, one of their collaborations off M.anifest’s latest album The Gamble.

Also sharing the stage with Worlasi was Edem, Adomaa, Akan, Efya, Trigmatic, Rhyme Sonny and others.

There was no dull moment!

Patrons who were thrilled by happenings at Worlafest 2019 took to social media full of praise for the ‘You Saw Me’ hitmaker.

So yesterday i went for #WORLAFEST for the first time.

I didn’t only enjoy myself i also learnt something.

Most of us out there got potentials but we just need someone who will give us a push and stire us in the right part.

The Senku band did not go out without some accolades.

Some pundits have been critical about the propensity for the Ghanaian audience to embrace Worlasi’s daringly authentic style of music. However, if the huge multi-national crowd that turned up for the December 7 is anything to go by, the prospects can only get better.

Music enthusiasts, investors and industry players are encouraged to support acts such as these to help revive a dying trend of authentic content.

We must not starve the resolve of the man who rode in on a white horse or risk closing the stable door after the horse has bolted.