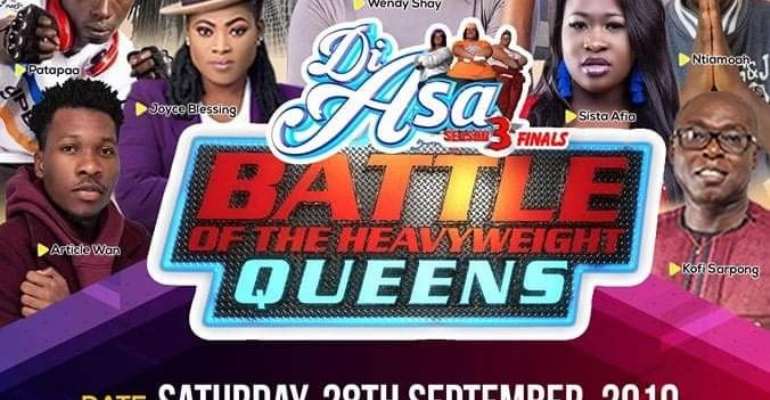 The show which will be held at the Fantasy Dome inside the Ghana Trade Fair Centre is expected to host about 6000 persons Across the country.

Organised for plus size women, this year's Di Asa will award the ultimate winner with a brand new salon car, with the second placed taking home 'Abosey Okai Matcho' and the third, 'Aboboyaa'.

Aside these prizes, the first three winners will have a sponsored trip to Dubai in addition to cash prizes.

Almost 50 plus size women qualified at the auditions which was held throughout the country, but 47 made it to the house.

At the end of all evictions, 25 contestants were evicted while 22 remained in the competition.

However, AMV brought on board the pull back section, enabling three of the evictees come back to the competition through public voting.

This brings the number of finalists to 25.
Meanwhile, all the contestants who will be sent to the finals will enjoy some cash prizes and packages from sponsors of the show.

Voting
The winners of the show will be selected based on public votes which amounts 60 per cent while judges have 40 percent stake.

Voting is currently ongoing and the public is encouraged to vote for their favourite contestants on SMS shortcode 1422 on all networks and on mobile money code *714*14# to enable the best win.

Tickets are also selling at the AMV head office at Avenor Junction at GHC50 for VIP and GHC30 for standard.

In an interview with the Managing Director of AMV, Mr Albert Kwabena Dwunfour, he assured the public of a well organised and a great show, urging the public to give the show its massive support.

He also encouraged the contestants to put out the best while he urged the families and friends to vote for their loved ones.

He added that aside the prizes made known to the public. There would be surprised packages and special awards to outstanding contestants.