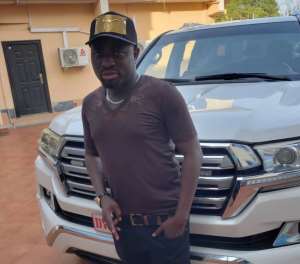 The gift to Sammy comes amidst the brouhaha about his purported arrest, though SeancityGh is yet to confirm from Bro Sammy whether or not the reported arrest case is true.

Bro Sammy is seen in a video in which he is heard to claim he has a cure to HIV/AIDS, cancer, kidney diseases, amount other kinds of sicknesses that his spiritual water can cure.

He has since released a new song, 'Aduro biara nka dan mu' which is taking over the airwaves across the country.

He has also apologised to the Food and Drugs Authority (FDA) for failing to seek their permission before promoting his 'spiritual healing water' on social media.