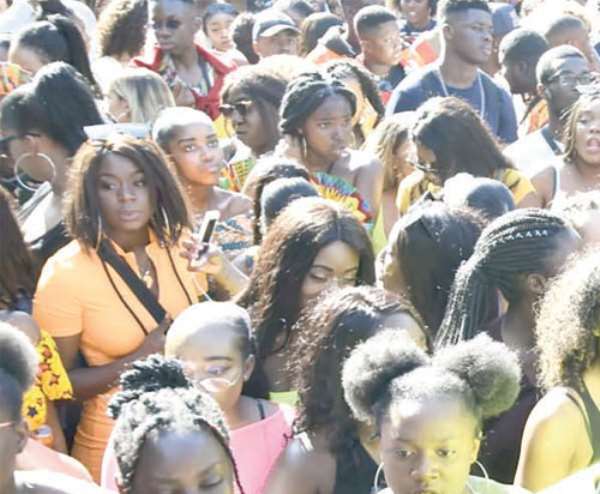 Several Ghanaians and other foreign nationals thronged Berlin, Germany, over the weekend to participate in the annual street carnival dubbed 'Carnival of Cultures', which was held from June 7 to 10.

Every year, Berlin celebrates the 'Carnival of Cultures', which attracts visitors from various countries, including Ghana, to participate in the carnival.

The carnival celebrates cultural diversity with street parade, music and dance, and thousands of artists, dancers and musicians flock to Berlin every year to celebrate this cultural carnival.

This year's edition attracted over one million people from all over the world, including over 2,000 Ghanaians living in Germany.

The street carnival gave Ghanaians the opportunity to display the country's rich culture and music to the outside world.

The four-day carnival featured over 80 bands which performed on three different stages at the event, among them was the Ghana Carnival Group, led by Fatima Adamu Suka.

During the carnival, traders from Ghana and some African countries mounted mini stalls along the streets and in some parks and engaged in the selling of various items ranging from food to artifacts.

Fatima Adamu Suka, organiser of the Ghanaian group, told BEATWAVES in a telephone interview that the carnival gave Ghanaians the platform to showcase their potentials with regard to costume designing, dance choreography, music composition, art, design, among others.

She said there was a float through some principal streets of Berlin, where participants were treated to different kinds of performance from various Ghanaian and foreign artistes.

According to her, Ghana recognises the 'Carnival of Cultures' as one of the diverse cultural products which could help to market the country as a fast emerging preferred tourism destination in Africa.

She, however, expressed her excitement about how Ghana's participation at the event had built a linkage between Ghana and Germany and other countries.

She also expressed her appreciation to Ghana's Ambassador to Germany, Her Excellency Mrs. Gina Blay, and the staff of the embassy for their contribution towards the success of the carnival.

She prayed that the embassy would continue to support Ghanaians in Germany to participate in the carnival in the coming years.

Since 1996, the 'Carnival of Cultures' has mesmerised Berlin with its blend of cultures, music and dances.