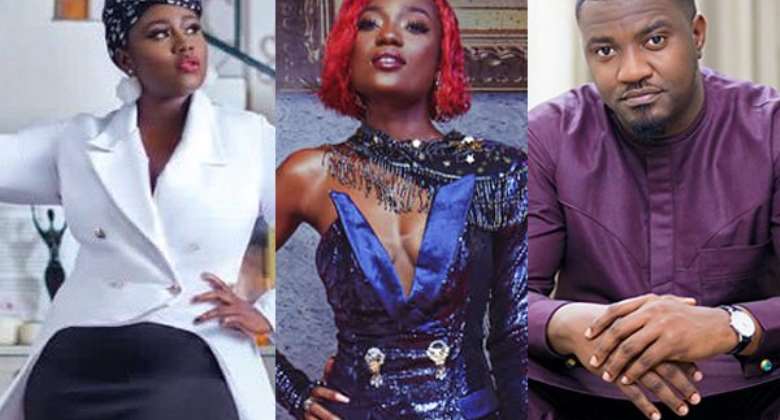 Many celebrities who were at the 20th edition of the Ghana Music Awards, had to leave the venue after a brawl broke out between the camps of Shatta Wale and Stonebwoy.

It all started when Shatta Wale and his team were seen going on stage after Stonebwoy was announced Reggae/Dancehall Artiste of the Year.

Pandemonium broke out when blows were exchanged between the two camps.

Stonebwoy then pulled a gun on stage.
Although he has apologised, many people have expressed disappointment in the conduct of the two artistes.

Some celebrities took to social media to share the ‘scary’ experience the fracas had caused.

For Actress Lydia Forson, seeing the gun was disgusting and traumatising at the same time.

She wrote on her Twitter page “ You people weren’t there so you don’t get how traumatizing this experience was. Do you know how many tragedies have happened because of stampedes?!”

Singer Efya who took the Female Vocalist of the Year Award for the night, revealed that some of her team members got tear gassed. She hopes the nasty incident would not repeat in future.

“We Need To Do Better. For The People, For The Culture.. For The Music!”

Comedian and show host, Kwaku Sintim Misa, said the fight that broke out reflects how lawless the nation has become and that needs to be addressed.

Actor John Dumelo had revealed he fled the venue upon seeing the gun. John wrote on Twitter “All this gidigidi is not necessary… To be honest, at the end of the day, what’s all the fight for?”

For rapper Guru, it was shameful to see the two factions compete between themselves to this point.

King Promise who took home Songwriter of the Year, sought to add comic relief to reduce the tension the brawl had caused. He wrote, “my shoe really heavy so then I for move quick!”

Okyeame Kwame on Twitter wrote the planet does not need “Beefs” but peacemakers.