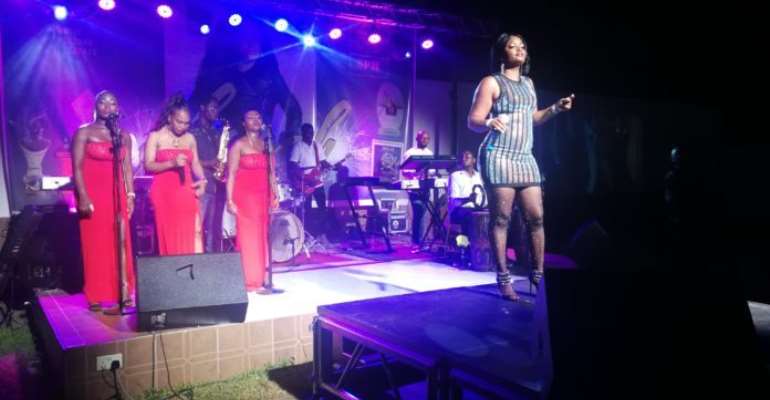 2018 has been a fruitful year for reggae/dancehall notable Shegah real name Mildred Mark Hansen. To celebrate with fans, media persons, associates and industry people, the seasoned songstress teamed up with her Magic Records handlers to throw a thanksgiving party on December 24 at the Kobi’s Event Centre at East Legon.

The advertised party set to start 6:00pm eventually commenced well after 8:00pm with acts Abban, Aligator and a host of others dishing their music to warm reception.

When she took her turn, Shegah proved that in her own right she was a notable who could indeed perform live. She was at ease with herself as she began her session with Bob Marley and the Wailers ‘Small Axe’ tune before entering her music bag to offer her own tunes including ‘Obaasima Shedem.’

There was an assorted offering of beverages ranging from palm wine, fermented corn drink also known as ‘Asana’; beetroot drink a.k.a ‘Sobolo,’ and cocktails ranging from Pina Colada to Mojito. Food was also in rich supply where patrons helped themselves to generous portions.

Under the year in review Shegah won at the Nollywood, Entertainment and Leadership Awards (NELAS) 2018 with her ‘Dem Marking Time’ song which entered the UK reggae and dancehall chart earlier this year. She was also was nominated in three categories including Best Female Artist of the Year which she lost to Jamaica’s Pepper. Her song ‘Murder’ ft. Samini and Jupiter which received massive airplay on UK television stations was also nominated Best Dancehall Collaboration of the Year.

At the 2018 edition of the D-Blaze Entertainment Music Awards (DBE Music Awards) staged on August 3 at the Old Town Hall, Stratford-London, Ghana’s reggae/dancehall and Afrobeats singer Shegah walked away with the ‘Best Song of the Year’ trophy leaving her competitors Abi Megaplus and Vera in the dust.

She was is in the UK to shoot a video for her new tune ‘OMG’ while ‘Dem Marking Time’ emerged in the London UK chart at number 16 before scaling up to number 9.

Shegah with her Magic Records crew have now set their eyes on the Nigerian market after their Ghana and UK exploits and with the partnership of Uncle P, the Nigerian music head, 2019 promises to be another Shegah year with nearly 200 million Nigerian ears to capture.

Ghana Would Be Cursed Should We Vote Against Akufo-Addo — La...
46 minutes ago