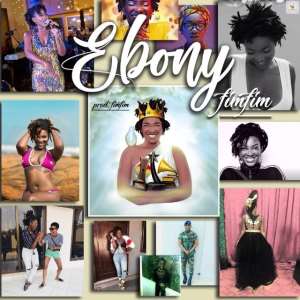 “If I die young, bury me in satin, lay me down on a bed of roses”. The words of this song originally written by Kimberly Perry, seem apt in describing the late 90s Bad Girl as she lays in state.

Is Ebony Reigns really gone? That seems to be the one thought running through the minds of the hundreds who thronged the Forecourt of the State House to bid farewell to the short spark of life the industry was gifted for two years.

One of Ebony’s closest friends, Phillipa, burst into tears when Adom TV’s Sandy tried to find out what the shocking news did to her.

Just like many others, the reality is now hitting home. The interview, just like her friend’s life, was cut short.

There was a cultural display with huge, artistic drums which were beaten to rhythm to house the feet of the ‘adowa’ and ‘kete’ dancers, representing the proud region of origination of ‘Ohemaa’.

Comedienne, Afia Schwarzenneger, in an interview gave Ghanaians a dose of her usual self, hitting hard at Ghanaians for being too hard at the young musician.

Describing Ghanaians as hypocrites, the controversial TV Host, chastised the industry for not celebrating people's talents when it should.

Singer Mzbel, also in an interview with Sandy, described her as a "sweet person”.

"She was always smiling, wasn’t bothered by anything,” she revealed.

The accounts of people who had personal relationships with her suggestion that maybe the industry knew and criticized Ebony, but did not take its time to know Priscilla Opou Kwarteng. Perhaps she would have been appreciated better.

In the “Nana Hemaa’ tribute song done by a group of female musicians, a line by singer Efya, translates "the tree of death, should not be climbed by one person”.

Watch the live video from the funeral grounds