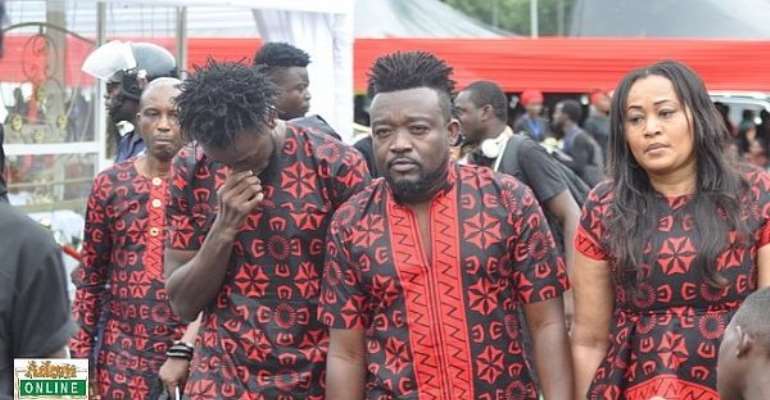 Bullet, manager of late singer Ebony, has said contrary to the widely held view that she was a wayward and a bad girl, the singer was a devoted Christian.

According to him, perceptions that she was untrained and unreligious are simply unfounded.

“Contrary to the commonly held, widely circulated but unfounded perception that Ebony was wayward, untrained and unreligious bad girl, Ebony was the exact opposite,” Bullet said in an emotional tribute to the late singer during her funeral on Saturday.

Ebony, born Priscilla Opoku-Kwarteng, was killed in a gory accident on the Sunyani-Kumasi highway. She was returning to Accra after visiting her mother on February 8.

Her childhood friend and assistant, Franky Kuri, and their bodyguard also died in the crash.

Known in real life as Ricky Nana Agyeman, Bullet said, “Ebony was a Christian and indeed worshipped any time she had the opportunity at the Golden Sensor Church [in] Madina…she was prayerful and had prayer sessions with a number of prophets, pastors and other Christian leaders. Ebony was kind, friendly, respectful, down to earth, and a philanthropist…”

“Ebony on stage in the performing arena was different from Ebony off stage. Off stage she was just as committed and ambitious as on stage except that she never mixed her private life with her business life,” he added.

Bullet, who is a member of music group Ruff N Smooth, recounted that Ebony was introduced to him in 2015.

“Ruff Town signing on Ebony was instant,” he noted. “She had the voice and the personality to match and was [the] type of marketable musician any record label will want to sign.”

He revealed that the ‘Sponsor’ hit singer got her stage from him. “The name Ebony was given to her as a stage name by myself, Bullet and with permission, she added the Reigns so she became Ebony Reigns. Ebony was highly gifted and talented musician…it was not surprising to see her blast through the industry like lightning.”

Bullet, who was filled with grief, said Ebony’s songs caught on like wildfire and so her fame grew. She showed dexterity in her performance and “created a brand that was unique to her,” he said.

“She had a vision and her ambition was simply to achieve it,” he said.

Flanked a team that helped push Ebony’s brand to millions of Ghanaians, Bullet concluded that, “…we say rest in peace Nana Hemaa (Ebony)…we love you.”