PAAPA Did it Again!!! 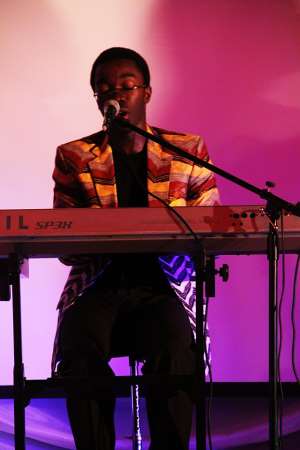 Over a period of 6 months, Paapa has released track by track off his debut album SOLAR on eight specific Sundays (Nov 2011 – April 2012). This past Sunday (29th July 2012), he crowned it all with the last of a series of concerts promoting his album SOLAR. The concert dubbed; A Solar Night, held at the Scratch Music Concert Hall, featured other contemporary Ghanaian gospel artistes: Heavens Connection, Preachers, Crossfire, Kingz Kid and saw Paapa perform with both his loop station and a live band.

The mixed audience of teenagers, young adults and a few old folk showed how far Paapa's music goes in influencing the lives of people of different generations. After very inspirational and exciting performances by the featured Guests, Paapa treated his fans to an hour of performing all ten songs off his album. The crowd's response was eclectic; responding to the songs by clapping, dancing and singing a long and even at one point, taking over a whole verse of his hit song Dear Grace.

Three major highlights of this concert where his surprise 21stbirthday celebration by his family and fans at the end of the concert, the announcement of his upcoming video shoot (for Jesus Cries) by ace video director Nana Asihene & the presence of his parents who joined him on stage for his final performance. The concert was put together by 233 LIVE & Skillions Records.