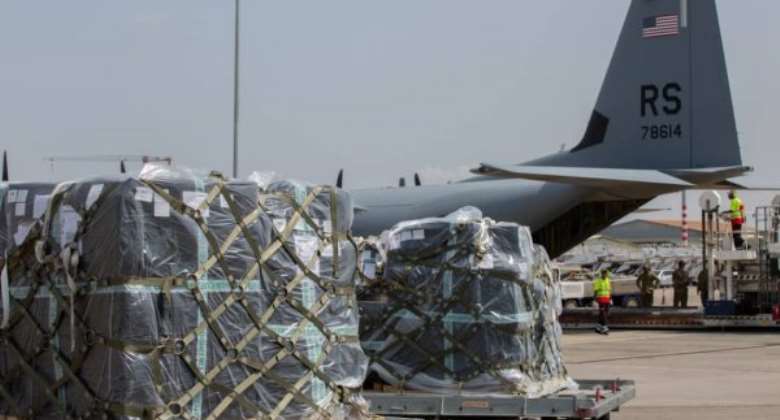 A statement issued by the Public Affairs Department of the Embassy said a United States Air Force C-130J aircraft from the 86th Airlift Wing in Ramstein Air Base, Germany, arrived at Kotoka International Airport on Friday, April 24 to make the delivery.

" They were originally ordered in January 2020 to support NAMRU-3 Ghana Detachment research efforts, specifically ongoing influenza surveillance, in partnership with Ghana's National Influenza Center at the Noguchi Memorial Institute of Medical Research, the Kwame Nkrumah University of Science and Technology, and the Kumasi Centre of Collaborative Research in Tropical Medicine".

The statement said, commenting on the delivery of these supplies, U.S. Ambassador to Ghana Stephanie S. Sullivan noted that: “The arrival of the needed medical supplies underscores the results of the growing partnership between the United States of America and the Republic of Ghana to combat COVID-19, to save lives and protect the people of this nation".

" As confirmed cases gradually made their way to West Africa and eventually Ghana, these essential laboratory supplies became even more critical during this rapidly evolving crisis and would have remained stranded in Manchester, U.K., until sometime in May if not for the assistance of the U.S. Air Force."

The United States, Ambassador Sullivan said, commended the Government of Ghana for its strong efforts to combat the pandemic", adding, "we are pleased to partner in its leading efforts.”

On behalf of AFRICOM, Air Force Brigadier-General Leo Kosinski, the Command's Director for Logistics, said, "The emergence of COVID-19 has introduced some new hurdles we have had to consider in U.S. Africa Command's Area of Responsibility.

" Movement of this shipment of critical medical supplies from the United Kingdom to Ghana represents one of many logistics moves executed recently despite operating in one of the most logistically challenging theaters to move people and material.

" The fact that so many professionals from multiple commands quickly came together to work through this particular requirement highlights our amazing and unique team of professionals.

" They are working together every day for the interests of the American people and our global partners even in the toughest of circumstances."

The April 24 delivery of medical supplies to Ghana followed other critical U.S. military support in the health sector, such as the delivery of two state-of-the-art Level II Field Hospitals that Ambassador Sullivan handed over to the Ghana Armed Forces (GAF) on February 4, on behalf of the United States, through the U.S. Government's Africa Peacekeeping Rapid Response Partnership program, the statement said.

"One of these hospitals is already being utilized to support the Government of Ghana's COVID-19 response efforts in Accra".

NAMRU-3 Ghana Detachment is a collaborator within the Armed Forces Health Surveillance Branch Global Emerging Infections Surveillance partner network and has supported influenza surveillance for both human and avian influenza strains in Ghana since 2007.

This democracy is better than coup d'état in Ghana – Second ...
2 hours ago