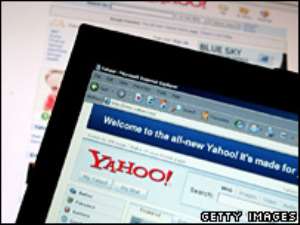 Internet search engine Yahoo and auctioneer eBay have teamed up in an exclusive online alliance.

Under the deal, Yahoo, the largest internet media firm, will be the exclusive provider of branded advertising on eBay's site.

In exchange, Yahoo will use eBay's payment system PayPal, to permit its customers to pay for Yahoo services.

The deal comes as both firms face stiff competition from rival Google, and are seeking new ways to gain market share.

"It's a very positive for both, since eBay gets to monetise its traffic with advertising," said Marianne Wolk, an analyst with Susquehanna.

Monetisation denotes a way to create revenue from a property or an asset, in this case by increasing advertising on an internet page.

"Clearly Google and Microsoft, I assume, would have liked this business, but Yahoo has more assets to leverage in a partnership with eBay," said Mark May, an analyst with Needham & Co.

Together Yahoo and eBay will reach more than 80% of the US internet audience, "so the potential consequences of this alliance are clearly significant," said Peter Daboll, chief executive of Comscore Media Metrix.

The joint initiative will start later this year.

The news occurred on the same day that computer giant Dell and internet search engine Google announced that a version of Google's software would be installed on Dell computers at the factory level.