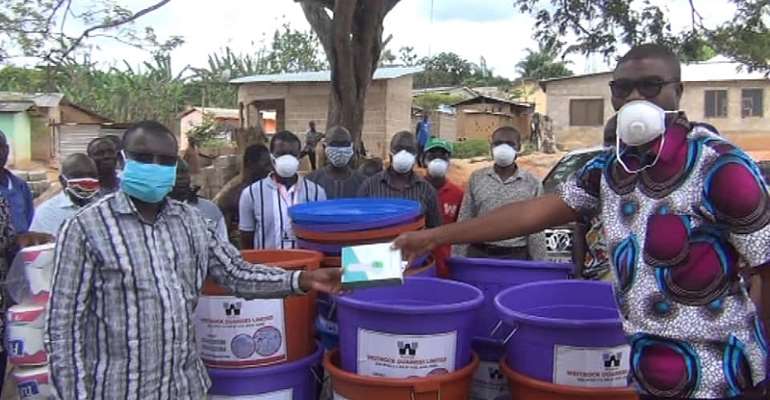 West Rock Quarries Limited, one of the six Quarry mining companies operating in the Anto-Abosu Electoral Area in the Shama District of the Western Region, has observed that fighting covid-19, obviously has become the collective responsibility of all Ghanaians.

The company noted that until the virus is defeated, Ghanaians would not feel safe, and productive, hence an appeal for all hands to be on deck.

As part of efforts to drive the collective effort directed at fighting the virus in its host communities, the company donated protective gear worth Ghc12,000 to the Shama District.

The donation, first of its kind in the area, was made in two separate batches to the Anto Community on one hand, and the Shama District Health Directorate on the other hand.

Making the presentation on behalf of the company to the community, Thomas Adikpo, Administrative Manager explained that the exercise formed part of their corporate social responsibility as an entity operating in the farming Community.

He described the fight against covid-19 in the area as the collective responsibility of all stakeholders.

"We all need to rally behind health workers to contain the virus and protect Ghanaians against further spread. The role we must play include absolute support to regulatory institutions, communities and health service providers"

This, he underscored, obviously informed the decision to offer the donation to the community and the Shama District Health Directorate.

Nana Atta Kakra, Chief of Old Daboase Junction, who received the items on behalf of the community, expressed profound gratitude and urged other corporate bodies to emulate the shining example of Westrock Quarries Limited.

At the Ghana Health Service Directorate in the Shama District, the Quarry Manager of Westrock Quarries Limited, Daniel Obosu, said the gesture had intended to cement the healthy relationship existing between the company and key stakeholders, including health service providers in the Antu-Aboso Electoral Area.

Dr. Osei Assibey, Shama District Director of Ghana Health Service (GHS), who received the donation on behalf of the health directorate, described the kind gesture, as timely and appropriate, considering the impact of the virus and the constant struggle to contain the virus while health service providers who were at the forefront continue to do that under difficult circumstances due to shortage of these safety logistics.

Explaining the genesis of the donation, Assembly Member of the Anto-Abosu Electoral Area, Emmanuel Owu-ewie, noted that it had become necessary for all Ghanaians to embrace the fight against the virus.