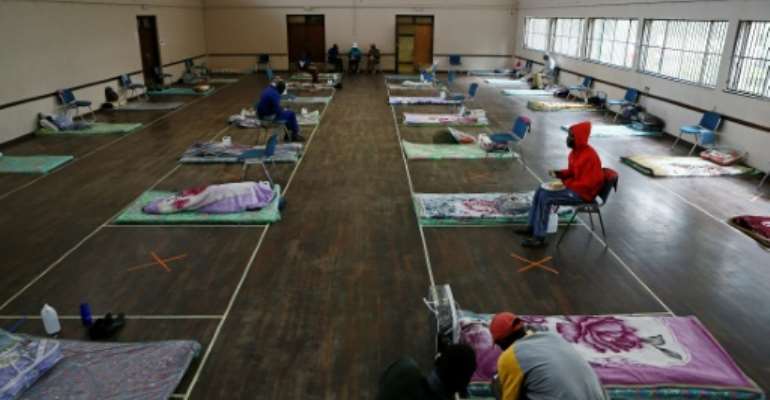 Haven: The Lyttelton Community Hall in Pretoria, one of a number of temporary shelters for the city's homeless during the coronavirus lockdown. By Phill Magakoe (AFP)

At a church in a quiet Pretoria suburb, a lost-looking man in ragged clothes was gently intercepted by a volunteer as he tried to wander out of the building.

"Shame, man," muttered the helper, as he coaxed the man back indoors. "He doesn't speak and no one knows his name."

A group of 18 homeless people had just spent their first night at the church, where they will be housed until the end of a 21-day lockdown imposed by South Africa's government to slow the spread of coronavirus.

Elderly and in ill health, they were rescued from a football stadium where homeless people were rounded up when police cleared the streets of South Africa's capital.

Playing solitaire on his new mattress, Johann described six terrifying nights at the stadium during which he was attacked and robbed by drug users.

"There was no sanitation given out to people there, you slept in tents or on the grass," said Johann, 45, who went to the stadium on his own accord after a police officer threatened to arrest him.

Yellow tape on the floor marked a safe distance between neatly made beds.

Outside the room, men diligently sanitised their hands before tucking into a warm plate of maize porridge, eyeing each other's name tags.

Municipalities across South Africa were in recent days forced to confront a long-ignored homeless population after President Cyril Ramaphosa ordered everyone off the street.

They have scrambled to set up temporary shelters. Nearly 1,200 people are being housed at sites in Pretoria but how many people need accommodation is unknown.

"We are really trying to do our best and make it as comfortable as we possibly can," Pretoria municipal spokeswoman Omogolo Taunyane-Mnguni told AFP.

Additional shelters are being opened, she said, admitting that the local government had been slow to act.

"It's not as rosy as we would like it to be," Taunyane-Mnguni said, referring to the football stadium, in which around 2,000 people were initially crammed last week. 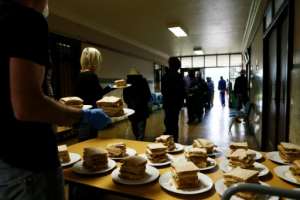 Nearly 1,200 homeless people in Pretoria have been given shelter during the lockdown but how many need accommodation is unknown. By Phill Magakoe (AFP)

Taunyane-Mnguni noted that the municipality was recently placed under administration and said charities and private donations had been key.

"A global pandemic is challenging us about how we think (and) deal with homelessness" said Wayne Renkin, from the Pretoria-based Tshwane Leadership Foundation.

At the church, multiple sclerosis sufferer Lee Daniels described the coronavirus outbreak as a "blessing in disguise".

"It's actually a good thing for me, coming to this place," said the 49-year-old shopfitter, unable to work since his muscle spasms became too severe.

"Last night was the first night I slept for a long time without any tablets," he smiled. "I was out like a candle."

With little access to information about coronavirus, Daniels said he was mainly conscious of being "very vulnerable" to the respiratory infection.

"I can't imagine myself being sick you know, especially in my situation," he said.

South Africa is the worst-affected country on the continent to date, with 1,505 confirmed cases so far and seven deaths.

On the other side of Pretoria, young men played football on a rugby pitch that has been declared an area for the homeless and guarded by police.

"They locked us here because of this sickness called corona," said 20-year-old Katlego Makhubela.

"They say it's going to kill us," he shrugged. "I didn't want to fight the police so I went there on my own."

Back on the street

Makhubela was among 300 men moved from the squalid football stadium. 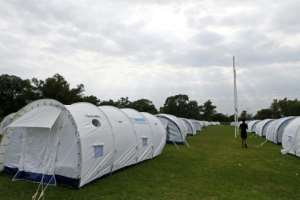 Tent city: Homeless people are being temporarily housed under canvas at the Pretoria West Rugby Stadium. By Phill Magakoe (AFP)

Under the watchful eye of police, they lined up to collect food donations and wandered over to large tents pitched on one side of the field.

"I don't want to go back to the street," said Makhubela, clutching his portion of meat and maize, also known as corn.

"Now that they (the government) have all of our names, maybe they can find a place for us," he added.

"I think there is an opportunity... because now they see we don't have nothing."

Despite efforts to enforce the lockdown, most of Pretoria's homeless remained outdoors -- rummaging through bins among closed shops and begging at intersections.

Ronald Kunene went back to the street after spending three days at the football stadium.

Standing at a crossroad near the bridge under which he sleeps, the 25-year old said he grew concerned about the proximity with other homeless people, many of whom appeared ill.

"It's a very dangerous disease," said Kunene, reaching a single gloved hand up to cars stopped at the traffic light.

"I am wearing the glove so that when I receive something... there cannot be any contact for that coronavirus."

As light traffic whizzed by, he explained that the lockdown had made it particularly difficult to survive.

"I wish maybe this coronavirus can disappear so that everything can go back to normal."