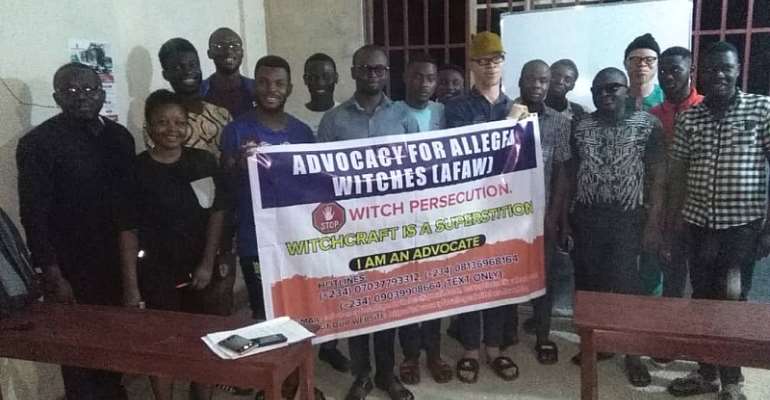 I just returned from the University of Nigeria in Nsukka (UNN) where I attended an event on Who is afraid of Witchcraft? Concerned students organized the program with the support of Basic Rights Counsel Initiative and the Advocacy for Alleged Witches. At last, university students at Nsukka displayed the lion and lioness in them. They came from various departments, engineering, sociology, political science, public administration, arts and sciences. They were curious and keenly interested in examining the phenomenon of witchcraft and in sharing their stories and experiences.

The day started with a radio program at Lion FM I was the guest on the program. I explained to the university community the need to explore and not fear the topic of witchcraft. I told listeners that witchcraft was a myth and a form of superstition. That witchcraft should evoke curiosity and not apprehension or anxiety from students. I made it clear that the protest that Christian students staged last November betrayed the trust on universities. It was in violation of academic freedom and inquiry. Some listeners phoned in to express their opinions on the topic of witchcraft and the event.

The first caller said that I needed to properly research before coming to declare that witchcraft was a myth. He alluded to the confessions by alleged witches and experiences within his family as evidence that witchcraft was ‘real’. In fact the caller said emphatically that the mother in law was a witch. And as a former cultist who had repented, he could attest to the reality of witchcraft. In my response, I told the caller that my position was based on research and that from my findings, threatening mobs and witch hunters used to extract confessions from alleged witches. Otherwise witch confessions could be symptoms of psychological imbalance or dementia. Thus those who supposedly confess to witchcraft need care not cruelty; they should be treated with compassion not subjected to torture and trial by ordeal.

The next caller stated that there was a justification of witchcraft in the Bible because in various sections of the christian holy book there were allusions to witches and familiar spirits. I told the caller that the Bible was a reflection of its time in history and embodied the beliefs that prevailed at the time of codification. That many acts and notions that the Bible glories and sanctifies are not tenable in the contemporary world including among westerners who introduced the Bible to Africans.

Another caller noted that there were positive and negative forces; black and white witches. He stated that while Africans used their own witchcraft for negative purposes, to harm and destroy, white people used their witchcraft to do positive things- to build cars, ships and airplanes. I made it clear to the caller that these distinctions and categorizations were meaningless and not backed up by facts or logic. That by implication, the owner of Microsoft, Bill Gates was a wizard and the Boeing company was a witchcraft company. Students who attended the event in the evening raised these issues again and highlighted the absurdity and peripherality of the idea. One student recounted that the grandmother was accused of witchcraft and allegedly confessed to making him partially blind. Another student recounted a witch hunting episode in the community in Abia state that led to the death and injuries of many persons including his father. One of the students who facilitated the event, Vincent, noted the importance of posing the question: How do you know? He noted that the question could reveal the absurdity and contradictions in witchcraft claims and ideas. Vincent notified the attendees of the death of Prof BIC Ijomah. A center named after him organized the ‘witchcraft’ conference in November. He later shared a comment that a student posted on hearing the death of Prof Ijomah: “They said that witchcraft is not real, can they now see its effects?”.

Another student who facilitated the event, Daniel (popularly known as Tigerwest) is a person living with albinism. He noted how superstitious beliefs about persons with albinism motivate ritual attacks and killings of "albinos". The deliberations went on for hours into the night. The participants have started a whatsapp groups to continue the discussion and interaction. Witch persecution will not end in Nigeria until a critical mass of students wean themselves off superstitious beliefs and become advocates for alleged witches.

Don't worry yourselves contributing Ghc100 to support Nation...
55 minutes ago