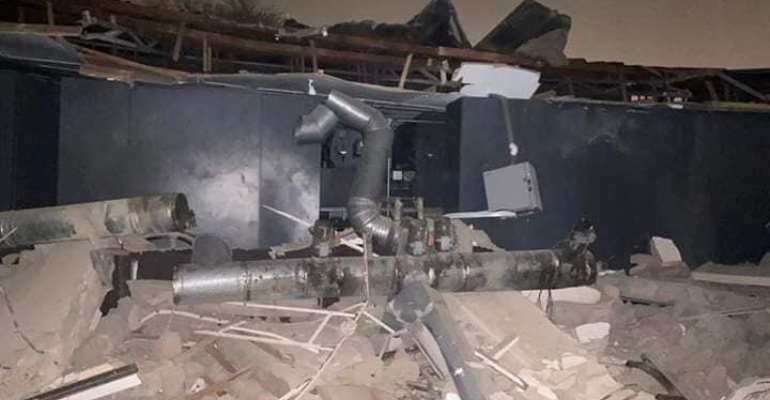 At first, I was confused about why a government (Landlord) will evict tenants (citizens, not spectators) from its property by destroying the entire property and the private assets therein. Many people posting the story don't seem to have any details besides the headline. So I have been asking for the real story.

And from my understanding of the issue from my sources so far, it will appear to me that this was a callous miscalculation my the mis-managers of the trade fair authority (government of Ghana) to redistribute the trade fair property to new owners sympathetic to the government.

Many private developers have a 20-year lease agreement with the government of Ghana (old government or new government makes no difference) to develop property (buildings to operate businesses).

One such tenant is Raymond Archer and his printing press business which has now been demolished with all the equipment inside the building. There are many more victims who aren't getting publicity as yet.

A 20-year lease agreement that allows private citizens to build and operate on the state land is not the kind of agreement that you will expect a government to throw away after 10 years or less of massive investments by private citizens. That is why these tenants went to court to challenge the unlawful eviction order from the trade fair authority.

But for whatever reasons that cannot be far away from political, the authorities chose to sneak at night to the trade fair centre not only to reclaim the land but to also destroy the assets of the current occupants.

One does not need to be a learned lawyer to know that the action of the government is illegal and should be condemned root, stem, and branch. These business people did not occupy the land illegally. They indeed have agreements with the government of Ghana. The government has therefore not only violated tenancy agreement but has also engaged in criminal conduct of destroying the property of law-abiding citizens. No wonder the rent control department is a useless government agency. If the government cannot respect rental agreements with its citizens, how can private landlords do otherwise?

The most reasonable thing would have been for the trade fair authorities to confiscate the properties pending the court resolution of the issues. Even that would have been illegal. But to utterly destroy these investments running into millions of USD is very wicked leadership and abuse of state power, to say the least.

These guys employed many Ghanaians. Raymond Archer, who I have never met by the way, definitely employed Ghanaians at his company. Demolishing and destroying his private property is not an attack on him as an individual, it is also an attack on all the families who depended on their jobs with his company.

And this company is just one of many that were demolished by the government. How many other companies were affected? how many families have been destroyed? Or did the trade fair authorities engage in this illegality without the knowledge of the government? is that possible?

And what are we hearing? that all this is just so that the government can pass the land over to one businessman (MacDan) sympathetic to the NPP? I hope this is a joke? Mr. President Nana Akufo Addo!

This sort of impunity should not be tolerated by the people in a country under the so-called rule of law. This trend must be resisted by all well-meaning Ghanaians because it is a big shame and a disgrace and a slap in the face of a property-owning democracy and rule of law!!!!

We are eagerly awaiting a reasonable explanation from the government of Ghana on this matter. At least, we-the-people deserve an explanation for this wanton destruction of private property by an NPP government that is a so-called believer in property-owning democracy!