Nomination And Appointment of A Chief Justice Of Ghana: Is Parliament Only A Conveyor Belt In The Process? 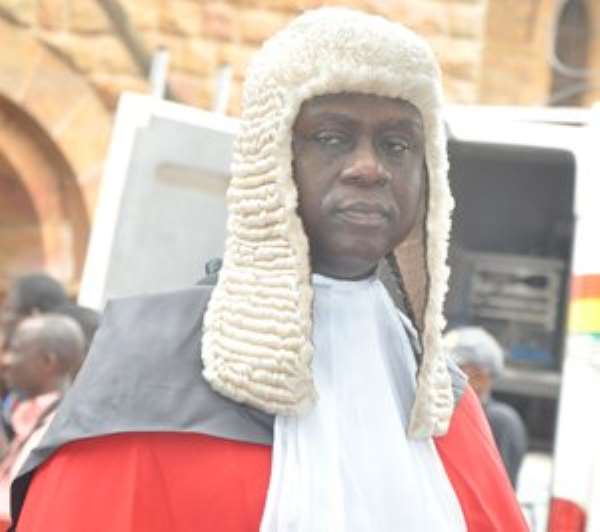 Ghanaians especially must be interested in national affairs and question things that are done on their behalf by the elected officialdom. My personal and inquisitive philosophy is that unless you are not compos mentis, happenings in your backyard or happenings you have witnessed first-hand, should not be narrated to you again as history by another person.

Nomination and Appointment Of The Chief Justice of Ghana

The nomination and appointment of the Chief Justice of Ghana and its related matters constitute one of those affairs of state that Ghanaians must be interested in. This is because the Constitution of Ghana says in both article 1 and article125 (1) that the sovereignty of Ghana resides in the people and in the name of the Republic, the judiciary administers justice that emanates from the people. Specifically, article 1 of the Constitution stipulates, “The Sovereignty of Ghana resides in the people of Ghana in whose name and for whose welfare the powers of government are to be exercised in the manner and within the limits laid down in this Constitution.”

Is Parliament a Conveyor Belt In The Appointment of the Chief Justice of Ghana?

Article 144(1) of the Fourth Republican (1992) Constitution of Ghana touches on the appointment of the Chief Justice. It stipulates specifically, “The Chief Justice shall be appointed by the President acting in consultation with the Council of State and with the approval of Parliament.” Note that the representative function of Parliament is to the extent that the embodiment of the people resides in Parliament as far as governance is concerned and in line with article 1 of the Constitution cited ut supra.

The 2011 Fiadjoe Constitution Review Commission (CRC) recommended under item 191 on page 247 of its Report that the current constitutional arrangement in place for the presidential appointment of the most senior Justice of the apex court as the Chief Justice (CJ) should be maintained. This is because it is in tune with international practices as similar arrangements prevail in India, Nigeria, Uganda, Namibia and the United States of America. This arrangement is to forestall the placement of a constitutional injunction on the President to nominate a person to the office of the Chief Justice.

However, the ten (10) member Fiadjoe CRC further recommended that the consultations in the appointment of a CJ of Ghana should be expanded to include the Judicial Council subject to two-thirds majority approval by Parliament. In their view therefore, article 144 (1) of the Constitution should be amended to read as: The Chief Justice shall be appointed by the President acting in consultation with the Judicial Council and the Council of State and with the approval of two-thirds majority of Parliament. The general intention of the Fiadjoe CRC is to cause an amendment of the 1992 Constitution of Ghana from the political one as it is now to a developmental Constitution.

It is to this extent that Ghanaians must not only see the Chief Justice as only the apex judge of the land but also as a potential acting President of the country as explained above. If it is so, then why must we not follow and question the process involved in selecting the chief justice of Ghana?

Since the promulgation of the 1992 Constitution therefore, the President of Ghana nominates a chief Justice candidate, usually the senior most Justice of the Supreme Court and the person is always vetted and approved by Parliament. I have followed this process very keenly and learnt a lot of legal language during the vettings. For example, it was during the vetting of the immediate past Chief Justice (Sophia Akuffo) that I first heard about the sub judice rule. Sub judice basically means that a matter is under judicial investigation so commenting on it publicly is forbidden or contemptuous until the court determines the case.

Having followed the process of parliamentary vetting of the Chief Justice candidate over the years, I can submit veraciously that Parliament had never rejected a CJ nominee after vetting him or her. The rhetorical questions that persistently prick my inquisitive mind are that are the Chief Justice nominees always qualified in every aspect so Parliament cannot say no to their appointment or it is the most senior justice caveat that warrants their virtual rubber stamp parliamentary approvals? If so, is Parliament not only a conveyor belt in the process? If Parliament will always approve the nominee on the altar of bench seniority, then why waste time vetting him or her with attendant allowances to the vetting committee members?

The issue of the President wielding too much constitutional power in appointing so many public office holders has been part of national discourse over the years. One would logically think that constitutional review efforts will be made in that direction but alas!!!, the politicians are only interested in reviewing only constitutional provisions that make their political parties participate in local government elections within the District Assemblies. Do you remember the recent upcoming referendum that was hesitatingly called off after lengthy and vehement debates with parochial partisan political interests across the divides?

Methinks that the process of appointing the Chief Justice of Ghana should be looked at again to make it more independent with Parliament playing a more active role than the current one that is apparently a conveyor belt function.

Or may be the people of Ghana should have additional say in the appointment of the Chief Justice. We only pay a constitutional lip service to the assertion and the concept that power and justice emanate from the people. In practice within an electoral system inundated with vote buying in any election, power truly emanates from the political elites who again exercise the power and they do so arbitrarily sometimes.

In any case, the Constitution only says power and justice emanate from the people but it does say who the people are. This is similar to Lucky Dube’s lyrics that “Bible says, He (God) made man in His image but didn’t say black and white”

Twisted and said my own way, the Constitution says power and justice emanate from the people but it did not say who the people actually are. Are the people the rulers or the ruled or both? To my mind, the people are both the ordinary citizens (the ruled) and the elected officials (the rulers) so justice and power can come from each or both of them. Usually, most people think the people in this context refer to only ordinary citizens or electorates. Under the influence of vote-buying, the people are virtually deprived of the Principle of Universal Adult Suffrage, which is one of the commitments of the people of Ghana as specified in the preamble of the 1992 Constitution.

There is the need for a comprehensive constitution review devoid of partisan politics to cure some of the defects in the current Constitution and therefore do not reflect contemporary thinking and will of the people. Result-oriented work in this regard must be done starting from the work or report of the Fiadjoe Constitution Review Commission established in 2011 by late President John Evans Fiifi Atta Mills.

After all, our constitution review efforts in 2011 were not necessitated by any cataclysmic events in the form of constitution failure as it was in many other countries such as Ivory Coast, Egypt, Libya, Tunisia, Zimbabwe, Yemen, Algeria, Bahrain, Pakistan, and Afghanistan. In the case of Ghana, we are being proactive rather being reactive with kneejerk approaches. We must, therefore, proceed to forestall any calamitous constitutional challenges in the future.

I hope zealously that both political and judicial officialdoms will begin to reason along this line with me. On the altar of fairness and accountability, the making and review of public policies and for that matter enactments must not be made with the ultimate and parochial interests of only political leadership. The political polarization in Ghana must stop somewhere.

Bigotry against Muslim students won't be tolerated – Muntaka...
37 minutes ago