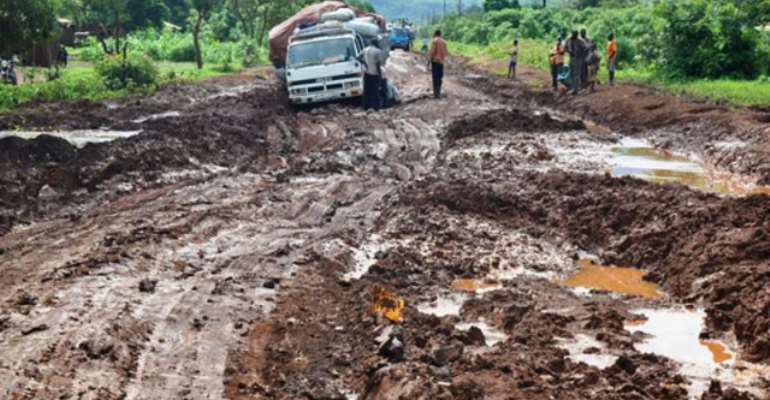 In most cases in Ghana, what is enshrined in the law and therefore justiciable deviates from the societal reality thereby not making the law reflect reality. Such is the situation of the law on the collection of tolls on most of the land surfaces we call roads in this country. In enforcing and interpreting the road fund law by collecting road tolls therefore, must we skew towards Hans Kelsen’s view and say that law is what the authorized lawmaker says it is? Or should we actually be motivated by the natural law school and say that once the law departs from fundamental values of society then it is no more valid?

Perhaps the citizenry should go to court and test the legal waters and see if the judiciary would agree with the American Realist, Justice Oliver Wendell Holmes, and decide that any attempt of law interpretation must take key cognizance of actual happenings in society and not mere syllogism. In Holmes’ view, the felt or expressed societal necessities of the time, the roles state institutions actually play and not merely, what they are supposed to play must inform law interpretation and enforcement.

One wonders if the road tolls we pay everyday are not tantamount to mere extortions from motorists, mindful of how most of the major roads in Ghana are extremely deplorable in recent times. Meanwhile, what do we see immediately the NDC or NPP wins a general election? Foot soldiers within the winning or ruling party (NDC or NPP) would chase their political opponents out of the tollbooths so that the winning foot soldiers take charge of the tollbooths on the altar of winner takes all. This act in my view fits to be called tollbooth coup d’état. The tollbooth coup gives an unwavering signal that there is something beneficial for foot soldiers at the tollbooths. Motorists pay the road tolls for the benefit of party foot soldiers. These same foot soldiers forcibly oust their opponents in charge of public toilets from their positions and take over. It is quite laughable but also disturbing in a democratic dispensation.

In 1985, the road fund was created under the watch of Chairman Rawlings (as he then was). That was four (4) years after he became the military Head of State and for that matter the Chairman of the Provisional National Defence Council (PNDC). He overthrew both the 3rd Republican Constitution, 1979 and President Hilla Limann on 31st December, 1981. Yes, the same Chairman Rawlings who left revolutionary scars on the nation.

In 1997 (12 years after the road fund was created), Parliament passed a law called the Road Fund Act, 1997 (Act 536) to give a proper legal backing to the road fund. Former President Jerry John Rawlings assented to that law on 29th August, 1997, in his capacity as the democratically elected First President of the Fourth Republic of Ghana.

The object or legal purpose of the Road Fund Act is to finance routine and periodic maintenance and rehabilitation of public roads as well as to provide for the management of the Fund and related matters. In addition, the law mandates that the road fund shall be used to assist the Metropolitan, Municipal and District Assemblies in the exercise of their functions relevant to public roads under any enactment. One can find these stipulations in both the preamble of the Road Fund Act and in sections 2 of the same law.

These provisions of the law mean that the people of Ghana pay into the road fund whenever they buy fuel at the pumps, or they pay bridge/ ferry & road tolls. They equally credit the road refund anytime they license vehicles at the Driver and Vehicle Licensing Authority (DVLA) as well as whenever they import cars into the country.

Per the tenets of section 4 of the Road Fund Act, monies for the Fund shall be paid into bank accounts opened for the purpose. One must therefore conclude with a fair margin of certainty that the law has protected the road fund for the specific purpose of financing routine and periodic maintenance and rehabilitation of public roads and related matters. It also means that the road fund must not be subjected to virement and neither must road fund-related revenue be collected into the Consolidated Fund. However, it appears that the road fund is being depleted for other purposes that are not road-related hence routine road maintenance does it not happen. Any depletion of the road fund contrariwise to what it was established for, amounts to fiscal indiscipline.

In the face of all this, then what is the road fund being used for, that most of the roads within and between the cities are very deplorable? Do we pay the road tolls to ply good roads or we just pay because the law says we must pay? Is the spirit of the Road Fund Act to the extent that we must continue to pay tolls on the roads even when the roads are bad? I think the reality on the roads must inform the Ghanaian to agree with both the natural law school and the American Realism that enforcement of the law must take cognizance of happenings in society and for that matter the nature of the roads.

In Egypt for example, a traveller from Giza (where the pyramids and the sphynx are) to Alexandria covers a kilometric distance of 180.16 which is in the form of an 8 lane asphalted highway yet motorists pay road tolls once on the way. In Ghana, one travels about 100 KM from Accra to Sogakope and pays road tolls three times before reaching destination. The paradox of the situation is that even at the tollbooths at Tsopoli, what is called road is something else yet the toll collection goes on there daily. Another irony is that there are more and better lanes from Giza to Alexandria in Egypt (180KM) yet there is only one tollbooth on the way but Ghana has three tollbooths and we pay three times on the bad 100KM road from Accra to Sogakope.

The tollbooths on the roads in Ghana have become nuisances. At least, the NDC drew our attention to it at the time the Kufuor (NPP) Administration increased the number of tollbooths on the roads. Surprisingly, when the NDC came back to power from 2008 to 2016, they maintained the Kufuor tollbooths and even added some. This is political pretence or propaganda without the welfare of the people at the heart of political leadership. The situation is regardless of the political party from which the leadership emanates. This is similar to what the American Public Administration expert, Donald Kettl described as an old wine in a new bottle. I must however commend Former Presidents Rawlings, Kufuor and Mahama for most of the roads they constructed in the country. That constitutes a Nehemiah/transformational leadership and must not go unnoticed.

Upon the daily collection of the road revenue from the identified sources into the road fund, the roads are not routinely maintained as the law mandates. So motorists in Ghana, is it fair to you to continue paying the road tolls? If it is not fair, must you keep mute over it or you must register your displeasure under the laws of Ghana?

Yesterday, I drove from Ho to Accra on the Ho –Atimpoku- Accra road. Wow. I kept asking myself in a monologue that is this a road? Is Ho also a regional capital? Perhaps someone should take the Government of Ghana to court one day for a faulty car part replaced and it is attributable to bad roads. Within this year, some motorists plying the Accra-Tema motorway protested by refusing to pay the tolls due to how the motorway has been left until it became a death trap. As a frequent user of that road, I agreed with that protestation.

Over the years, managers of the Ghanaian economy contract huge loans and tout the securing of those loans as a political achievement. Achievement my foot. How can you go and borrow money and call it an achievement? So is it an achievement or not, whenever we take personal loans from the banks? No individual puts that on his CV as an achievement. As such, the leader must be a mediocre if he boasts of securing foreign loan for the country. Currently, we are seen reciting a poem entitled Ghana Beyond Aid and at the same time, we have our begging calabashes in hand hunting for loans regardless of how the conditionality affects the current generation and posterity. We need to deviate from the hypocrisy and face reality. Which aid are we are we beyond?

No one political party that ever formed government under the 1992 Constitution can be blamed for this appalling situation. Yet in every election year, most of the electorates sell their birth rights through vote selling and suffer the consequences. It is about to happen again in 2020. Some also cheer their party leaders up even when the latter is deviating from attending to the welfare of the people. To my mind, he who is unable to point out the wrong doings of his loved ones might have lacked sovereignty of reasoning. Let us question our leaders why they neglect routine road maintenance and let us register our displeasure to them to do the right thing.