Can Ghana And South Africa Help To Unravel The Secrets Behind Dag Hammarskoeld’s Death? 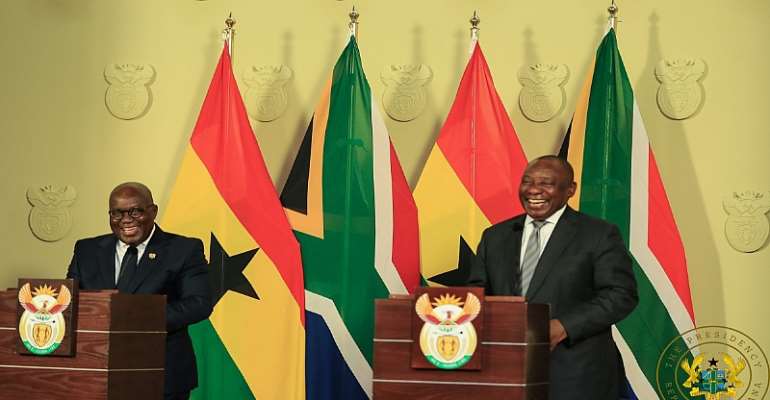 It was heart-warming to see, on 5 December 2019, the Presidents of Ghana and South Africa -- Their Excellencies Nana Akufo-Addo and Cyril Ramaphosa – exchanging ideas on how to take forward, the excellent relations that the two countries have built up between themselves since South Africa achieved democracy in 1994.

Mr Ramaphosa will take over the chairmanship of the African Union (AU) at the beginning of 2020, and he’s been visiting West African countries to renew ties with them before his great day arrives. (He will be taking over the AU chairmanship from President Alpha Condẻ of Guinea.)

In fact, South Africa will find 2020 a most challenging year, for it will also be continuing to serve as a non-permanent member of the UN Security Council, having been elected to that important body by the General Assembly in June 2019. This will be the third time South Africa has been given this honour by the UN. The question is: what will South Africa do with it?

It is my fervent hope that South Africa, which acquired so much emotional intelligence as a resylt of the horrors endured by its citizens during the apartheid years) will, in concert with sister countries like Ghana, help the UN finally to unravel perhaps the most mind-blowing mystery of the 20th Century, namely, the suspected murder, in September 1961, of the the then United Nations Secretary-General, Mr Dag Hammarskjoeld.

The answer is that it wasn’t Hammarskjoeld as a person who was killed (if his death was a plotted assassination, as many historians suspect). Yes, every assassination is a diabolical act. But some assassinations are more diabolical than others.

Hammarskjoeld was the elected head of the United Nations Organisation – the body specifically created by the nations of the world, to avoid the horrors of war in future. (The Second World War had disgusted even the most blood-thirsty of human beings, having resulted in the deaths of over 20 million people.)

So, when, on the night of 18 September 1961, the world heart that the man who represented the world’s hope for a new peaceful future had died violently, the shock was considerable. Suspicions were aroused immediately, for Hammarskjoeld was travelling to try and resolve one of the most intractable problems of the post-war world – the struggle of the Congolese people to regain control of their resources, having been ostensibly given their “independence” by their former brutal coloniser, Belgium. Belgium was merely play-acting, of course.

For the Congo’s independence threatened the future of racist, colonial rule in the whole of South-central Africa. First, there was the Federation of Rhodesia and Nyasaland (controlled by Britain through minority white “settler” communities.) Then there was South Africa (ruled with an iron hand by white racists under the system of apartheid). Next, there existed the Portuguese colonies of Angola, Mozambique and Guinea-Bissau – all a source of great wealth to Portugal (just as a great part of Belgium’s wealth came from its “part-ownership” [with American and British companies] of uranium, diamond, copper and other mining concerns in the Congo).

These countries had, though intrigues of a highly intricate nature, managed to overthrow the elected Prime Minister of the Congo, Patrice Lumumba, and eventually, to kill him. Their main instrument for doing this was a man called Moise Tshombe, whom they encouraged to establish a “secessionist regimes” in one of the Congo’s richest provinces, Katanga [where the multinational company, Union Miniere du Haut Katanga, operated.]

The United Nations had sent troops to the Congo to try and get its Central Government (when it was headed by Prime Minister Lumumba) to re-establish control over the whole country. But the Belgians and their NATO allies were helping Tshombe to resist the UN’s efforts. They financed him and recruited experienced white mercenary soldiers for him, so he could resist any attempt by the UN to end Katanga’s secession.

The conflict in the Congo was threatening to cripple the United Nations (for “co-operative” decision-making at the UN became impossible, due to the actions of Belgium’s NATO allies, which, predictably brought a vociferous, hostile reaction from the Eastern bloc and the Non-Aligned Nations). It was at this stage that the UN Secretary-General, Dag Hammarskjoeld, decided that he needed to engage in personal diplomacy to save the UN effort in the Congo, and thereby, the future of the UN itself. He decided -- some think courageously, others think it was the result of pressure from the Western countries -- to go personally to see the secessionist rebel, Moise Tshombe, despite the odium against Hammarskjoeld that such a meeting would create in the eyes of the Eastern bloc and the Non-Aligned Nations.

His plane never made it to Lusaka, the Northern Rhodesian capital. It was there that, rather strangely, Britain had organised a meeting between Hammarskjoeld and Tshombe. The plane “crashed” and Hammarskjoeld and fifteen other people on it were all killed.

Now, as Hammarskjold was the personification of the new hope that humankind was entertaining for peace and security through the UN, it would have been thought that if he had been assassinated, the assassins would be quickly found out quickly and punished. Why? Because the two most feared “Powers” in the United Nations, the United States and the Union of Soviet Socialist Republics, were both known to be equipped with awesome information-gathering capabilities. They engaged in the routine interception of encrypted, secret communications between nations and their embassies abroad, for instance. And they had the power to tap all electronic communications -- through satellites stationed above the earth.

But although fifty-eight years have passed since that tragic night of Hammarskjold’s death, we are no nearer to finding out the truth about what happened than the world was, more than half a century ago. Speculation upon speculation has been applied to the mechanics of the so-called “accident.” But all the nations capable of satisfying the world’s curiosity by disclosing the facts they possess, have kept mum.

Now, who are these conscienceless “hoarders” of “state secrets”, who, by covering up the facts, convict themselves of “guilt” in a conspiracy of silence? A former Tanzanian Chief Justice, Mr Mohamed Chande Othman, was appointed in 2016 to pursue facts which the UN’s initial investigation in 1962 into Hammarskjold’s crash, had failed to unearth. (The 1962 investigation concluded that a final verdict could not be reached with regard to whether the crash was “the result of an aerial attack, or an accident.” The case was therefore “closed, pending new revelations”, it said!

Mr Justice Chande Othman’s final report actually notes that he had, as far back as 2017, reported to the UN that “it was plausible that an external attack or threat was a cause of the [Hammarskjold] crash and that the burden of proof had shifted to Member States to show that they had conducted a full review of records and archives in their custody or possession”.

This is where Ghana and South African come in. Ghana’s President of the time, Dr Kwame Nkrumah, was very well informed about world affairs. For instance, he told Ghanaians of Lumumba’s murder before the murder was officially confirmed. Both the US CIA and the British MI6, knew about everything that was going on in the Congo. And the USSR, through its penetration of Western espionage through its turning of Western spies such as Philby, Burgess and Maclean, knew about what the CIA and the MI6 knew!

The MAIN player in the Congo was, of course, Belgium. It not only had the support of its NATO allies, but also, that of the apartheid regime of South Africa. Now, South Africa was the principal base of recruitment for many of the British, American, French and South African “mercenaries”, who were being paid handsomely for fighting to prop up Tshombe and his fellow secessionist warlords. So, South Africa had bags of information on every aspect of the Congolese conflict.

The former Tanzanian Chief Justice has asked South Africa’s current Government to give him that part of its huge dossier on the Congo that is relevant to Hammarskjoeld’s death. But, says the judge, although South Africa made an appointment “in May 2019,” to assist him in tracing information, “no information had been received”.

Surprise, surprise: neither the United Kingdom nor the United States of America, had provided the information he had asked for (said the judge in his report). The Russian Federation, for its part, had also told the Judge that it had “performed searches”. But the Federation had “not provided any information.”

The former Tanzanian Chief Justice added: “Evidence suggests that at least one of these Member States attempted to influence the UN inquiries [on the crash] of 1961/62, towards a finding of “pilot error”, creating further impetus for transparency now. The historical record thus allows it to be established with confidence that these Member States must have created or taken custody of relevant records, he added. For example, reports and statements by certain of their own intelligence operatives had been made public or found in private archives, and diplomatic correspondence stated that information was also sent to intelligence agencies for follow-up.”

The learned Judge expanded on his statement above, as follows: “Knowing what we do of Member State policies, assets, equipment and personnel in the area at the relevant time … records of intercepted or overheard communications must have been made. Classified reports using intelligence assets and sources must have been generated in the immediate aftermath, when it was realized that the Secretary-General’s plane had crashed.”

Despite this, however, not much information from such sources had been provided. Yet, the judge pointed out, “Information of the type requested is the missing link that makes the present picture incomplete, and its conspicuous absence means that conclusions about the cause of the crash cannot yet be reached.”

I therefore call on Ghana and South Africa to adopt a high moral attitude and take the lead to name and shame all the countries that are withholding information from the UN. They should publish whatever they can unearth from their own files, and leave the judge to say whether it is useful or not. In such complex cases, in fact, it is so-called “minor” bits of information that often provide a clue to the big picture. Anyway, the UN is the protector of small nations and small nations should therefore be the UN’s fiercest champions against the rich, powerful and extremely arrogant Big Powers of the world who think they alone should dictate what course our Planet should be steered along.

South Africa and Ghana would be demonstrating a strong sense of moral leadership to the world if they were to act in such a way as to warn any future conspirators who plan to harm a UN official – and thereby indirectly assault world peace – that they cannot hide for ever, and that humanity would act together to fish them out and hang them out to dry.