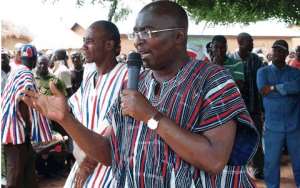 Vice President, Dr Mahamudu Bawumia has challenged the National Democratic Congress (NDC) to a show of records in office to enable Ghanaians judge who has met their aspirations the most.

He said he was convinced that when pushed to a debate of facts and achievements, the NDC would have no leg to stand on.

Addressing thousands of youth at the end of a health walk to climax activities marking the NPP Youth Wing Conference in Tamale on Saturday, the Vice President enumerated over 80 key denominators of national life in which the almost three-year-old government has performed better than its predecessor.

“Average annual increase in electricity prices between 2010 and 2015 was 45 percent, public finances were in a precarious state. The government had to go to the IMF for a bailout and policy credibility. There were increases in taxes on many items including condoms and cutlasses and freeze on public sector recruitment.”

Vice President Bawumia said cuts in research allowances for lecturers and abolition of teachers and nurses training allowances were just a few of the legacy of the NDC.

“The Government of Nana Addo Dankwa Akufo-Addo has been in office for about three years. Even though there is still a lot to do, any objective assessment of our performance will agree that we have performed much better than the situation that we inherited at the beginning of 2017,” he said.

Zeroing in on the specifics, Vice President Bawumia listed 87 different areas in which the Government has performed better.

Abolishing taxation of gains from the realisation of securities listed on the Ghana Stock Exchange, abolishing levies imposed on Kayayei, the efficiency of clearing goods at the ports Resourcing the institutions that fight corruption, Right to Information Act; and Development of Zongo communities.

The rest are the National ID Cards; Mobile Money Payment Interoperability; One District One Factory; One Village One Dam; One Constituency One Ambulance; National Entrepreneurship and Innovation Progamme (NEIP); Digital Address System; Implementing the Nation Builders Corps; Securing higher global prices for cocoa farmers; Cleaning up the mess in the financial sector and saving the deposits of millions of depositors; and Foreign Direct Investment.

Vice President Bawumia also mentioned the Successful exit of the IMF programme; Increasing the capitation grant; Equipping the security services; Introducing a nation-wide emergency 112 number for the police, fire and ambulance services; Introducing a new basic curriculum from kindergarten to primary six with a focus on reading, writing, arithmetic and creativity (the 4Rs) and Absorbing the cost of WASSCE registration fees for students.

He said the Akufo-Addo government had performed better in absorbing the fees for postgraduate medical training, Restoring research allowances in tertiary institutions, Introducing drones to deliver medical supplies and save lives; Paying NHIS arrears; Paying the outstanding contributions to pension funds; Paying arrears to road contractors; Constructing youth resource sports complexes across the country and Relieving the pain of sickle cell sufferers through access to hydroxyurea.

Increasing the share of the DACF to persons with disability by 50 per cent, Employing persons with disability to man 50% of all our toll booths; Providing adult shelter to support victims of human trafficking; Connecting rural communities to the telephone network in the last three years; and Increasing daily peacekeeping allowances for the Military from $31 to $35 per day were other achievements the Vice President mentioned.

He said the Government also performed better in increasing daily allowances for police on mission from $30 to $35; Establishing the Students Entrepreneurship Initiative (SEI) to inculcate the spirit of entrepreneurship in students; Having transparency in the allocation of oil blocs; Creation of new regions; Bringing peace to Dagbon;

Providing infrastructure to poor and deprived communities in every constituency and One District One Warehouse Initiative.

Also mentioned were Improving the conditions for prisoners; Protecting water bodies against illegal mining; Going paperless in the hospitals; Online business registration at the Registrar Generals Department; Digitizing the courts through an e-justice program;

Establishing a Ghana Commodities Exchange; and Taking measures to establish an integrated Bauxite and Aluminium Industry.

Reducing flooding from the Bagre Dam through the dredging of rivers like Nasia, Sisili; Discovering oil; Revival of Railways; Starting the construction of 10 fish landing along the coast from Keta to Axim;

Award of Scholarships to students; Revival of Anglo-gold Ashanti and putting more people to work; and Reviving Ghanapost were some of the achievements, said the Vice President.

He added that Reviving the Ghana Publishing Company; Launching a comprehensive Building Code for Ghana for the first time; Administering the performance of the annual hajj pilgrimage; Expansion of institutions, facilities and equipment for TVET; and Implementing Free Senior High School Education, were some of the milestones.

CEO Of Travel Bureau Limited In Court For Stealing, Forging ...
30 minutes ago