How A ‘YES’ Vote Will Expose Our Local Governance Arrangement 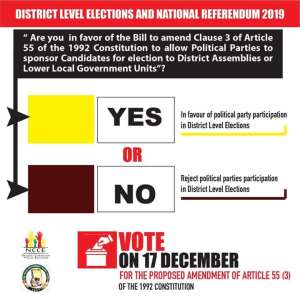 Can you believe that after 25 years of decentralised approach to governance, the laudable efforts of the government to deepen democracy (by making local elections political party-driven) is being threatened this late hour by a NO vote?

In the first place, that clause in the 1992 Constitution to prohibit political party participation should not have been there, much more, to be an entrenched one. But the exigencies of the time might have influenced the formulators of the clause to democratize at the national level only. Let us remember that one of the cardinal features of a democratic state is the presence of political party participation in local elections. It will be funny for a democratic state to say that ‘I allow political parties to participate at the national level but not at the local level’. And we have been ‘funny’ all these years just as we mix devolution and deconcentration - a bigger problem coming when we elect chief executives.

Now, this is it - when a country’s choice to governance is more or less, a centralized approach then forget about political parties, be it at the national level or local level. We must therefore, understand what is meant by having a political party - a vehicle for putting in place a government that will deliver on the demands of the State; to ensure a happy, decent and quality life of the people.

Let us not blame those who put the entrenched clause. They have done their job. Now we must do ours. But to do so requires us to be prepared sufficiently to manage the fall-outs of the change-over if the ‘YES’ have it at the referendum. Be prepared not only for the transition because certain things will become a permanent feature of our governance and development approach which will impact existing arrangements at the local, regional and national level.

In respect of decentralization, political party participation (including local elections) is a feature of devolution and even though we ‘brag’ that we are pacesetters of decentralization in Africa much of the practice is a mix of deconcentration and devolution - a funny side of a hybrid- which does not actually give power to the people but from which centralization steals the show. When political parties come into the fray at the local level, things will have to change.

Traditional Rulers: What will be the role of our traditional rulers? Are we further going to isolate them to our own detriment? This is a serious issue that requires strategic thinking of the matured but not the cacophony of the pretentious and loud mouths.

Legislation: The existing laws (including Political Parties Law) will be impacted immensely and unless quick revisions are made many court actions will come.

Relationship: The relationships among national, regional and local players will become deeply strained if we fail to clearly define in law/policy. The directives from national to local levels stand endangered.

Conflicts: We will have them like never before. What will it take for a ruling government to engage an opposition-dominated district?

Participation: In the manner in which we run our politics at the moment, it is likely participation in local level decision making process will not be pleasant. Are we going to (knowingly or unknowingly) re-inforce exclusivity by the way we do things? If not careful, we stand to deepen the ‘we’ and ‘them’.

Management: A certain situation will develop regarding what, who and how the district will be managed.

Control: The big question is, who is in charge at the local level? It cannot be the President. And if not, who is? Mind you, the President is not actually, ceding power to the people; it is to the political parties in the local areas.

Budget: The way the national budget is prepared will be impacted since there will be a strong movement to go beyond budget by sectors.

Local Development: The agenda will now be set by political parties and any external imposition stand to be fiercely resisted.

Regional Parliaments: Advocacy for many things including regional parliaments will emerge with time.

There are many more issues. Key among them is human capacity and the preparedness of the political parties themselves. What is their level of readiness for the responsibility coming? In their current form, God Save Us.

A ‘YES’ vote is a plus for political parties; they can now become more strategic in planning and deploying resources to win national level elections. Cheers!!!