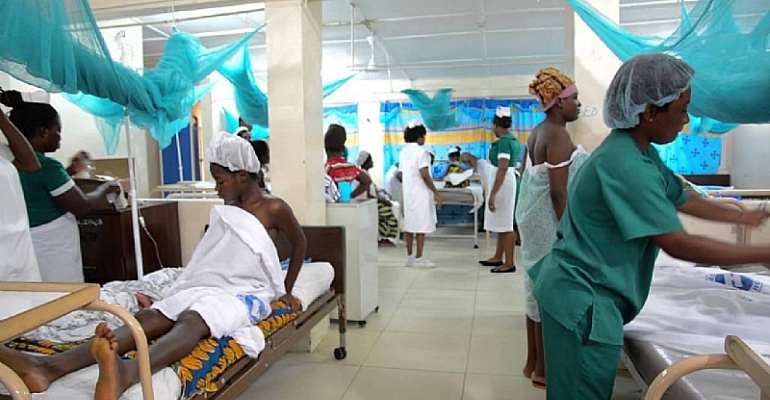 Healthcare cost worldwide has increased drastically over the years making access to services difficult for especially low income earners. Even the mighty United States of America struggled with opening up financial access to the poor; and so when The Patient Protection and Affordable Care Act (Obamacare) was passed and signed in to law by President Barack Obama on 23rd march 2010, many health professional groups lauded it as the best thing to have happened to the American health sector in recent times. The law expanded Medicaid eligibility and major changes to individual insurance markets.

Successive governments in Ghana have made the health sector one of their strategic area by increasing budgetary allocations to the sector. This is not surprising because health and education are two most important sectors that directly affect the poor and the marginalized. Government expenditure on health as a percentage of general government expenditure increased from 8.33 in 2003 to 15.08 in 2005 and then fluctuated between 16.45 and 9.32 till 2014 when it dropped to a decade low of 6.82. The chunk of this amount is however spent on personnel emolument leaving just a paltry sum of money for actual investment in infrastructure, equipment and service improvement.

GoG Administration, which is meant for the administrative expenses of both regional and district health directorates, is very erratic; sometimes only one quarter allocation is released to the directorates in a whole year, yet they are expected to implement policies, supervise and monitor implementation at the hospitals and the sub-districts under their care. There were times that simple office stationery becomes a difficult thing for health directorates to procure; instances where procurement was made on credit, payment becomes a hurdle as expected inflows did not come. So you have broken down vehicles/motorbikes, broken down medical and office equipment, lack of funds to fuel vehicles for service delivery as daily problems to grapple with.

The introduction of publicly funded health insurance in Ghana in 2003 was seen at the time as a game changer for the health sector, to increase financial access; particularly to workers, low income earners, the poor and the indigent. From a district mutual health insurance, the scheme had expanded to a nationwide insurance such that once a person is registered on the scheme; accessibility is not limited by ones geographical area. The scheme has gone through many phases and is currently doing electronic renewal through the use of mobile phone technology platform for payment.

The scheme was bedeviled with issues of fraud by some district officers and other staff of the scheme. There were cases where clients paid for renewal but were not issued receipts and thereby causing financial loss to the Insurance Authority. Some Health facilities also double charge clients of the scheme by making NHIS card holders pay out of pocket, then goes on to process claim forms for payment of same service.

There were reported cases of some doctors working in government health facilities who have private clinics at the same time; data of the clients these doctors attended to in the government facility were transferred to their private clinics and processed as if they were attendants at that clinic, causing the NHIS huge sums of money in claims payment. Unlike the United Kingdom and the United States where I am told doctors working for government in government facilities cannot operate a private clinic or hospital at the same time, the case is different in Ghana. Doctors, Pharmacists, Biomedical Scientists and other staff working in government hospitals own private clinics, pharmacies and diagnostic centres mostly very close to the hospitalss they work in. Some healthcare services are directed to these centres and sometimes those staff spends more time working for themselves than for government. This phenomenon is known to health authorities but because there is no law regarding this practice, the phenomenon continues unabated. This practice is a drain on the pocket of the poor and limits access to service which they were genuinely entitled to receive.

Government of Ghana has been using the National Health Insurance Levy (NHIL) as a cash cow for political activities, some for capacity building for members of parliament, cash for district assemblies to provide mundane activities for health institutions and yet failing to pay same facilities for health services provided. The contract between the National Health Insurance Authority (NHIA) and the service providers (hospitals, health centres, diagnostic centres and private pharmacies) stipulates that the NHIA will pay for services provided within 90 days of submission of claims, but this is not adhered to by the NHIA. Payment to health facilities delays for over 1 year and yet facilities are expected to provide quality health care service to insured clients.

Government indebtedness to health facilities between 2015 and 2019 ranges between Gh¢800,000 and 1.2billion, revenue accrued from the NHIL and SSNIT contribution to NHIS ranges from Gh¢1.4billion in 2016 to Gh¢1.87billion in 2018. As of June 2019, funds accumulated was approximately Gh¢1billion! So why is government lamenting all the time about burden on the scheme and even suggesting SSNIT contributors should pay additional amount from their pension contribution to support the scheme? The NHIA is more concerned about having beautiful offices with fancy furnishing especially their regional offices where next to nothing happens, but payment for services has become like a favour they are doing their service providers.

NB: data is from the ministry of finance website.

The NHIA should focus on reimbursement to its service providers than spending much of the revenue accrued to them on non-health related activities. Indebtedness to health facilities were paid after one full year and even in bits, thereby reducing the value of the money owed to service providers through inflation.

Opposition political parties struggling to woo the masses for their cause have used the health insurance scheme for propaganda by badmouthing the scheme but as soon as they assume political office, they want everyone to believe in the scheme and patronize it. There were many instances of people not being able to pay for their health care cost and when you asked them why they were not using NHIS card, they tell you they heard that the insurance doesn’t work anymore, so for their parochial political interest, politicians are ready to rundown any government institution as long as doing so helps their course. The current administration in 2016 sent their political media house to a health facility, they went to the maternity ward and gave the women baby clothes and without permission from hospital authorities, engaged the women to say the NHIS was not working, as soon as the women say it is working the video camera man would remove the camera to another one. They badmouthed the scheme and after they won the election, they want everyone to believe that the scheme has been resurrected by them, when it didn’t collapse in the first place. The current opposition, who fought vehemently against the practice when they were in government, is also perpetuating the same evil against the scheme.

The pricing regime being used by the National Health Insurance Authority is nothing but a mockery of what goes into healthcare delivery. The mark-up on NHIS medicine list in most cases ranges between -2% and 2%, those above this mark-up are medicines that are not largely consumed. Service charges for procedures are way below what entails in the larger health sector especially private hospitals. How do you expect a health facility to buy paracetamol, the very basic drug across all the levels of the healthcare system between 78 and 10pesewas per tablet and sell it at 4 pesewas to insured clients? Government is pretending to be interested in the provision of quality healthcare service to citizens but denying service providers the funds needed to continue that quality service delivery.

The actual cost is different for secondary and tertiary hospitals; it is not the charge by private hospitals but rather public.

Comparing the above pricing regime, one will understand the pretense on the part of government that it is providing medical cover for the populace with their tax money. By the time hospitals are paid this meager amount, which is usually more than 1 year, the value would have reduced as a result of inflation. The NHIA also adopted a very bad posture, deducting a flat 10% of total claims submitted for mistakes in the G-DRG (Ghana diagnostic related groupings) and medication-treatment mismatch. This amount is not refunded if after vetting they realized that there were no mistakes or the mistakes did not amount to that percentage of your total claims.

Another disingenuous way the NHIA adopted which disadvantaged facilities is the payment of claims in bits. For example; Koryorbeda Hospital submitted claims for January to December 2018, NHIS decided to pay claims in April 2019 and paid70% of claims submitted for

March 2018, 80% of April, 65% for June and 80% for December; leaving full moth payments with the remaining percentages of the few months it has paid. This makes it difficult to keep track and sometimes ended up not being paid. How do you expect health facilities to pay their suppliers?

The attitude of government through the NHIA officials is as if it is doing health facilities a favour. Chapter 10 clause (a) of the Service Provider Contract signed between the Health Insurance Authority and the service providers states that: “In entering into and complying with this Contract the Provider is at all times performing as an independent contractor. Nothing in this Contract shall be construed or be deemed to create a relationship of employer and employee, principal and agent, partnership, joint venture, or any relationship other than that of independent parties contracting with each other solely to carry out the provisions of this contract for the purposes recited herein” This notwithstanding, the NHIA acts like a bully, dictates to healthcare managers who should sign official documents sent to the authority, pay for services when it feels like and has no respect for its own contract it drafted solo without any input from service providers.

According to the World Health Organization (WHO 2016) life expectancy in Ghana has risen from a low of 40m/42f in 1960 to 62.5m/64.4f. This means people are averagely living longer now than before, this will surely have implications on the country’s health. Old age related diseases are evidently on the increase, Hypertension; Cardio Vascular Accident (CVA) especially are claiming many lives. The worry is that most of the people suffering from this are retirees; having paid part of their pension as a premium to the NHIA while working, one would have expected that the system will run well for them to benefit even while on retirement but this is not the case.

Government is pretending to be running a health insurance system by starving health service providers funds to run efficiently. The NHIS funding sources, per the data provided is enough to pay for claims submitted to the NHIA. Ghanaians are taxed to fund the insurance scheme and government cannot afford to use the usual excuse of lack of funds to deny citizens quality health care; while same money is diverted to fund other activities such as MPs going on capacity building, which has nothing to do with health.

The writer is a Health Service Administrator