The Monsanto Papers, Glyphosate And GMOs, How Will Ghana Respond 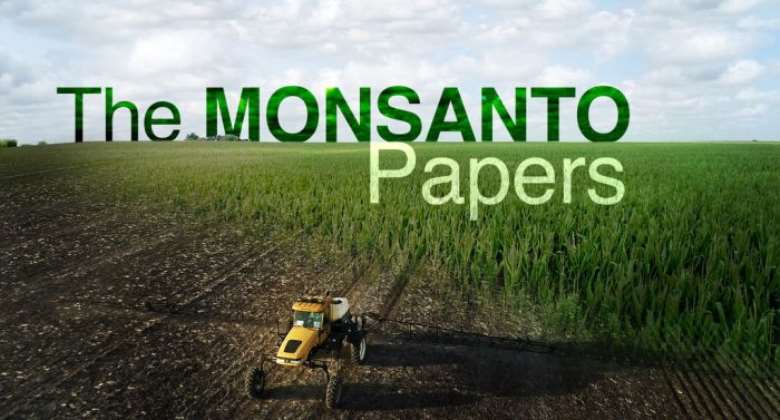 Glyphosate is a broad-spectrum systemic herbicide and crop desiccant. It is effective against weeds, especially annual broadleaf weeds and grasses that compete with crops. (IUPAC name: N-(phosphonomethyl) glycine) it was developed by Monsanto and registered in the US in 1974 and widely used all over the world. The chemical is branded by Monsanto as Roundup however; other manufacturers have their own brand names for it. Monsanto has now been bought by German chemical manufacturer Bayer in September 2016 for $66 billion dollars.

Recently, there has been much litigation on the carcinogenic nature of the chemical which was allegedly known to the company at the time. 141 papers belonging to the company were declassified to expose the impact of the company's efforts to influence the reporting of scientific studies related to the safety of the herbicide, glyphosate. The documents revealed that Monsanto sponsored ghostwriting of articles published in toxicology journals and the lay media, interference in the peer review process, behind-the-scenes influence on retraction and the creation of a so-called academic website as a front for the defense of Monsanto products.

In one of the cases against Bayer, a Californian Court Jury awarded a couple Alva and Alberta Pilliod $55 million in compensatory damages and $2billion in punitive damages, but was reviewed downwards by the Supreme Court in California to $17 million and $69 billion, respectively.

The Court, presided over by Alameda County Superior Court Judge Winifred Smith said that evidence supports the jury's conclusion that Roundup's main ingredient, glyphosate, was a substantial factor in causing non-Hodgkin's lymphoma in Alva and Alberta Pilliod. They had used Roundup for more than 30 years to kill weeds on their properties. At least 2 other similar cases against Bayer were won by the plaintiffs.

Glyphosate is widely used in Ghana, just walk into any agro chemical shop and you will find it there. Last year during my annual leave, I travelled to Dwarf Island in the Afram Plains, this place is only accessible by boats and majority of the inhabitants do not have formal education. I was surprised to see how glyphosate was widely used by the people. The empty containers were not properly disposed of, and children could easily use them as water bottle.

The question is what are our government agencies doing with this information? The ministry of Agric and the Food and Drugs Authority (FDA) Are they not aware? What steps are they taking to warn, restrict and completely ban this cancer causing chemical? What it means is that whatever information the manufacturers put on the product label could not be trusted because it was proven that Monsanto engaged in fraudulent activities to hide information about the dangers this chemical could cause to humans and the environment and also engaged in misinformation of the very users of the product.

It was this same Monsanto that is trying to introduce Genetically Modified seeds (GMO) into Ghana. Already, there are some groups that are seriously advocating for GMOs here with the excuse that it will bring research benefits to the country.

Seed varieties are indigenous to different geographical regions, and God in His infinite wisdom made it so, interfering in this diversity will spell doom for the planet. Imagine one company having autonomy over seeds all over the world, where will be sovereignty if your seed is in someone else’s hand?

Ghana is quick to accept international treaties, agreements, money etc sometimes for the sake of getting the title “the first country to” without carefully finding out if that is the best for the country. A case in point is the introduction of CSE which was out rightly rejected by Ghanaians. I am reliably informed that the GES developed Adolescent Sexual Reproductive Health & Development source book for teachers and was about to launch it before the proponents of CSE pushed their document on us and our beautiful document, crafted with Ghanaian brains according to our cultural values, was suspended!

May we take action quickly on glyphosate, may we not allow GMOs here, at least until we are certain.