Asantehene Is For All Of Us! 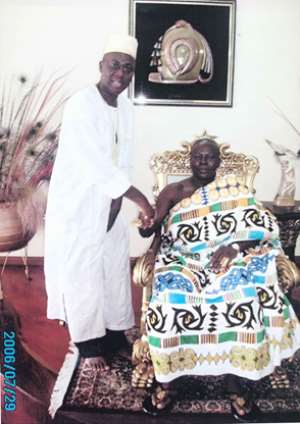 The Reference:
A speech at the UN in New York and a statement in Accra, Ghana.

Matters Arising:
Actually, there’s not much more to the above than that, but all of a sudden, in certain quarters at home in Ghana and diaspora Ghana, it’s been as if a general reveille has been sounded for us to take to the ramparts to ward off an invading horde.

In this whole thing, two good friends, His Excellency and His Majesty, mild-mannered and well-behaved as they are, are being pitted against one another in a totally nugatory joust with no trophy of fair play at the end…

Last week I published my eye witness report of the concession speech of President Mahama after Election 2016. Claim to fame? Well, I have another: My meeting with the Otumfuo at Manhyia a few years ago to plead his intervention in a couple of cases that I thought his voice would make a difference.

It happened this way: I had the singular honour, pleasure and privilege of being present at a place where my hobnobbing was climaxed by a few minutes chat with the king and I used the opportunity to give him a gist of what I wanted to put before him. Without hesitating a second, he asked me to see his private secretary to arrange a Manhyia appointment.

I did not have to wait long for the appointment to be confirmed and a day before, I headed to the Garden City with my younger sibling driving. On appointment day, I presented myself at the gates of Manhyia and to my pride and joy, I was expected. Without delay I was ushered in to a waiting room where an orderly promptly received me and informed me that his Majesty was expecting me but at that moment was engaged and had issued instructions for me to be taken on a tour of the private museum attached to Manhyia to while away the time. It was a remarkable show of respect by a man so high to someone like me.

And true, just as the tour was ending, we were summoned that he was ready to receive me. Royalty and high office do indeed have mystique. As I approached the stateroom where he was waiting to receive me, I saw many powerful looking individuals – some clearly chiefs themselves – also obviously waiting to be received, and yet, they were having to wait for me to go in and have my audience.

He received us warmly and I think I first of all started by apologising for not doing the right thing. I did not have by the traditional “amane3” schnapps. He laughed heartily at that! At such private and confidential meetings, no notes are taken. His Majesty, my young sibling and I were left alone. He listened carefully without interrupting me even once. When I was done, he remarked that he didn’t know I had the wisdom of King Solomon. He noted my conclusions and said he would take up the issues with the appropriate quarters.

After these fifteen or so minutes of our official business, we engaged in general conversation on this and that and he was so relaxed and obviously enjoying himself that a few times when a courtier would come in to whisper to him that so-so-and-so had been waiting, he would politely nod and also whisper a word or two but did not hurry me to leave. I knew better not to overstay my welcome so I waited for a convenient break in our conversation and then asked for permission to leave. He cleared the path for me and told me that any time I wanted to see him I should call the secretary and arrange an appointment, but when a person at that level extends such an offer, you do not trivialise it so all this time, I have not invoked that privilege…I did meet him again much later under different circumstances and as usual his warmth towards me was very palpable. He chided me for not visiting, but again, a king cannot be your regular “oware” playing partner…And that is the kind of nobility the man exudes.

John Dramani Mahama and the Otumfuo are good friends, in fact, very good friends – just as he was with the late former Vice President Alhaji Aliu Mahama, who, if I can name drop, he used to endearingly call his son!

As a modern African politician, JM understands “amamre” more than most – I got that first hand most recently. Since the six new regions were established, I have been with him to quite a number of them on an outreach programme. At all the venues of such programmes, his first points of call have been on the traditional rulers, including Zongo opinion leaders. In all the Twi speaking areas, he would speak in impeccable Twi, with appropriate proverbs and all. I once asked him where he learnt his Twi from and even he could not tell!

The trend of this narration is just to say that JM did not, would not “insult” his friend nor for that matter any traditional ruler and the Otumfuo can do without the self-help call to arms of the individuals and groups trying to drag his name into their politico-ethnic games.

The Otumfuo inherited a great heritage from his ancestors which is now universally regarded as the cultural face of the modern nation state of Ghana: In addition to the fecundity of the land, we have language, arts and crafts, oral literature, cosmology, governance and much more. In fact, that is why he was invited to address the UN in the first place. So who are claiming the Otumfuo as their sole property? He belongs to all of us and we will rally to his defence when we feel that he is truly coming into harm’s way.

To cynically exploit a delicate issue requiring tact and diplomacy, like some of the uninformed bigoted politicians claiming to be defending the Otumfuo’s honour are doing and inciting ethnic passions, is to bring His Majesty’s name into disrepute. If you ask me, that is the real insult!

I am married to an Asante woman, possibly more blue blood than the loud and crude politicians without any refinements or finesse parading as defenders of the king’s honour. By Akan traditions of matrilineal inheritance, my children are as Asante as any of them. So who owns the Asantehene?

From my marriage to an Asante and my other inter-personal Asante relationships, I know the graciousness and generosity of proper Asantefuou and as a Northerner, I also know the historical relationship between the Asante Kingdom, Gonja, Dagbon and more. So what is this nonsense about all these crocodile tears call to arms?! Incitement to violence, that’s what! Is it not shameful that almost three years after peaceful elections, some people would want to see us use anachronistic election-related matters to create tension in the country?

I know these two good friends would be very distressed by this storm in a teacup and work to get closure to it and where would that leave these cheap ethno-political point scorers? Where they belong but unlike them, I will not spit it in their faces…

If there is any war to be fought, it should be on the battleground of development and progress not on this flimsy thing being paraded as a political point-scoring gimmick and fanning sectarian prejudices and blood lust!

The Constitution of Ghana is the final arbiter not the brawn of political thugs! Ghana will not burn. His Excellency and His Majesty will not allow it.

Thankfully and reassuringly, JM himself has stated in a statement that, he together with his friend “will take the necessary steps to bring closure to this matter” with a plea to “the general public and party members not to be bated into non-constructive flogging of this issue”.

Closure too, in general terms, must be found for the language of hate that has crept into our polity with the purveyors of such dangerous ideas being given free rein by a society that has become too partisan to care…

And by way of conclusion, I wrote this opinion piece on Saturday September 21 2019, the 110th Anniversary of the birth of the founder of our nation, Osagyefo Dr. Kwame Nkrumah and would take the opportunity to assure him that what he created on March 6 1957 ”shall not perish from the Earth”.