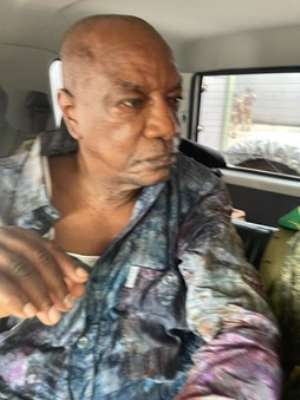 The pathetic and bewildered look says it all. A broken man. Only a week or so ago, everything was at his beck and call as president of the Republic of Guinea. His orders were being barked here and there, in fact, everywhere and uniformed security personnel would snap at attention, saluting away even if it was only his shadow they glimpsed flashing by. He was a powerful man, very powerful man. His satellites were many – family, friends, timeservers and others, describing all sorts of orbits around him. He and his satellites exuding power, arrogance and wealth! Owners of all that they surveyed…His words, quoted and repeated ad nauseam by the media, especially the state-owned ones, were more or less law. He travelled widely abroad, enjoying all the creature comforts not available to the ordinary taxpaying citizen. At international regional and sub-regional summits, a very exclusive club, hosting countries treated him and his colleagues like deities. The privileges associated with his office were thick and juicy! Don’t get me wrong, I am not being a spoilsport, nor am I being jealous or envious. On the contrary, I think, with some amount of moderation, the office deserves all that to allow the holder to serve his people with integrity, accountability, competence and incorruptibility, and know when he had expended his welcome to leave the scene – in Ghana’s case, after two terms. I believe in his case it was the same, until when he decided that he alone was the anointed and decided to amend the constitution to allow him to be on top indefinitely, and then…

I first heard of coup d’état on a windy, dry savannah February morning in 1966 when I was a little schoolboy attending Navrongo Secondary School. Our headmaster, a feisty Scotsman called Robin Crawford (later the Rev) that morning, called an emergency assembly. The whole school, including the teaching staff, trooped to the assembly hall, which at that time also doubled as our dining hall. Even before we had settled, he delved into his mysterious reason for assembling us in such an emergency fashion. He said to us that news had just come from Accra that President Nkrumah had been overthrown in a coodeta. Classes would not continue and we were all to proceed to our dormitories and remain calm. End of Assembly. We trooped out the same way we came in with coodeta ringing over and over in my head and wringing my curious ignorant mind into all sorts of knots. There was no going to the dormitories as we gravitated in clumps to our different groups to learn some more. There was an old “rediffusion box” somewhere in the entertainment area where the senior boys taken positions. Every now and then, some of us would tear away from our peer clumps to this senior one to listen to the “rediffusion box” and read the lips of our seniors. The box itself was blaring mostly military style music. It was from one of these seniors, a distant relation that I finally got a hang of coup d’état and the man behind it, a Colonel “Kiteku”, and true, that’s how that one also twisted itself to my tongue. The coup d’état of February 1966 and Colonel Kotoka’s role are now an indelible episode of our history, for good or bad, but by popular acclamation, for bad…After that, we had the coups of 1972 and 1981, with a “housecleaning revolution” in 1979, a palace coup that removed the coup maker of ‘72, and the palace coup makers themselves who were all scythed in the house cleaning, not forgetting the number of attempted coups thrown in to add to the flavour of coup making in Ghana.

The overthrow of President Professor Alfa Conde of Guinea came to me from a friend through my WhatsApp – the “rediffusion box” having gone extinct for decades now. As soon as I finished reading it, I sent a one-liner to him: “Serves the fool right!” This is a man who refused to see all the wrong turns he was taking, plunging his impoverished country into more and more underdevelopment. He was a typical example of words that have become very symptomatic of many African countries, sadly including mine at the moment: impunity, arrogance, corruption, abuse of power (especially, the electoral process), destruction of state institutions, treating the constitution with contempt (for example defying its intrinsic secular nature with the imposition of a so called national cathedral as the “mother church” of Ghana to act as the focus of everything Ghanaian). And much, much more.

It is right we abhor and frown upon coodetas, but our governments must also reign in their inordinate lust for the abuse of office – something Frema Busia described in a recent commentary as “yentie obia”! I don’t know, but maybe, it was just a Freudian slip or living in denial, but the ECOWAS statement, originating from Ghana, could not bring itself to accept the Guinean coup and referred to it as an “attempted coup”.

They must mend their ways, for somewhere, not far off, only an AK47 barrel away, a coup maker may be lurking, using “yentie obia” as his casus belli, which for my country, I say, God forbid! Never again! To the credit of the Guinea coup makers, they did not harm the deposed head of state in anyway, with the exception of his dignity, which is in tatters, what with all those embarrassing pictures of him that have gone viral. Video clips have also appeared showing former ministers and appointees of the former government being taken away with taunts of “thieves, thieves” from the public. It is also worth noting that the coup was peaceful, something we cannot say of Ghana’s 2020 elections, which registered deaths and injuries, with the culprits still roaming free.

More from Feature Article
ModernGhana Links
Malawi: Honor Police Officers Who Save Lives of Witchcraft Suspects
Russia trapped in a catastrophe of their own making
Killing For Blood Money
TOP STORIES