Is Mahama on the verge of making another history? 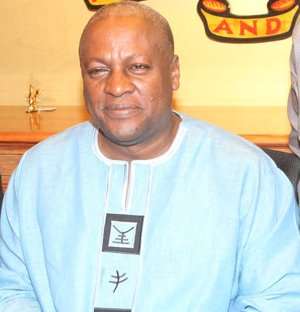 The former president and the NDC’s 2020 flagbearer, John Dramani Mahama, holds an unparalleled record of being the first incumbent president of Ghana to be voted out of power in his first term in office.

It is also an open secret that former President John Dramani Mahama has held a panorama of important positions in Ghanaian politics.

Interestingly, however, on 7th December 2016, about 55.6% of the electorates expressed their disappointments in his performance as the first gentleman of the land by showing him the exit; he lost by a huge margin of over one million votes. Indeed, it was the first in the history of Ghanaian politics.

The reflective observers thus find it extremely bizarre to see the former president blissfully moving heaven and earth to reclaim power barely 30 months after being voted out of office by discerning Ghanaians due to his dreadful errors in judgement amid massive economic collapse.

Besides, observers contend that former President Mahama had had enough opportunity to show discerning Ghanaians his ability to steer Ghana to the right direction, but wilfully failed to do so, and, was rightly rejected by over one million electorates.

The critics would thus quiz dejectedly: ‘what can Mahama do differently at the presidency next time around’?

What is more bizarre though, is that Ex-President Mahama and his teeming supporters are moving up and down the country and unfairly castigating President Akufo-Addo who is prudently fixing the massive mess left behind by the erstwhile Mahama administration.

The sceptics, therefore, contend that despite the unpardonable mismanagement which brought about his heavy defeat in the 2016 general elections, the former president holds a faint hope that he will bounce back and recapture the power from the NPP in 2020.

The sceptics nonetheless insist that it will rather be easier for a camel to go through an eye of a needle than NDC returning into power anytime soon with former President Mahama, judging from the unprecedented economic mess he left behind.

Given the circumstances back then, we can confidently conclude that the 55.6% of electorates were not happy with former President Mahama, and hence showing him the exit in the 2016 general elections.

The overarching question then is: what will make the unhappy 55.6% of electorates change their mind and repose their absolute trusts in Mahama in 2020, given the encouraging signs of auspicious economic growth under the Akufo-Addo’s leadership?

Take, for example, not long ago, the Economist Intelligence Unit (EIU) concluded in its country report released on 13 May 2019 that Ex-President John Dramani Mahama will find it extremely difficult to convince discerning Ghanaians into accepting that he is the preferable manager of Ghana’s economy, given the country’s fairly strong economic growth under President Akufo-Addo.

In fact, under Akufo-Addo’s presidency, Ghana’s economic growth has moved from a disappointing 3.4% in December 2016 to a favourable 8.6%.

And, the previously double digit inflation (15.4% in December 2016) has been reduced drastically to around 9% as I write.

Given the circumstances, one cannot be far from right for suggesting that the EIU has been extremely charitable to former President Mahama for failing to make it clear that NDC would have stood a better chance in 2020 if the party Delegates had elected a different flagbearer.

Since assuming power on 7th January 2017, the Akufo-Addo’s government has rolled out numerous social intervention programmes and policies to the benefit of all Ghanaians.

Thus, it is somewhat spurious for the sceptics to assert somewhat anecdotally that the thriving economy is not reflecting in the pockets of Ghanaians.

So the economic experts want to tell us that such interventions aren’t reflecting in the pockets of the Nurses and Teachers?

In addition, the Akufo-Addo’s government has judiciously distributed the national resources in the form of Free SHS, which paved way for more than 400,000 children a year, including the over 190,000 children who otherwise would not have the opportunity to enter senior high school.

There is no gainsaying the fact that Ghanaian parents are reaping tremendous benefits from the Free SHS policy.

It is anticipated that the government will spend a staggering amount of GH5532.83 over a period of three years on each student.

How can any economist then convince some of us, who are mere novices when it comes to economics that the Free SHS scheme is not reflecting in the lives of Ghanaian parents?

Strangely though, Mahama and his teeming supporters are claiming that Akufo-Addo rather lied about the rampant corruption in the NDC administration which resulted in their 2016 humiliating defeat, while failing to accept the fact that there were unobjectionable bribery and corruption scandals such as the infamous Bus branding, the Brazil World Cup, SADA, SUBA, GYEEDA, SSNIT, NCA, MASLOC, the furtive Ford Expedition Vehicle, the Woyome’s 51.2 million dubious judgement debt, the Waterville’s $30 million wrongful payment, the Isofoton’s dubious payment of $325,000, among others.

The NDC diehard supporters are blaming Akufo-Addo for their 2016 humiliating defeat, while blatantly ignoring the GH200 million SADA funds spent on trees which were later burnt down and the guinea fowls that miraculously flew to the nearby Burkina Faso.

The NDC loyalists are forcefully protesting their innocence, while ignoring the fact that they wilfully misapplied $175 million loan facility secured in 2012 which was meant for seven district hospitals.

Mahama and his loyalists are insisting that Akufo-Addo lied about their incompetence, while refusing to accept the fact that they went haywire during the 2012 electioneering campaign in their desperation to cling on to power. Thus they broke all conventions. Many government departments spent over and above their allocated budgets.

Mahama and his followers are arguing somewhat impetuously that there was nothing incompetence about reversing the previously single digit inflation and budget deficit to doubled figures.

The NDC operatives are contending vehemently that the NPP loyalists cannot impugn incompetence on Mahama and NDC for carelessly dragging the GH9.5 billion debt which former President Kufuor and his NPP government left in 2009 to GH122.4 billion as of December 2016 with nothing or little to show for.

Shockingly, Mahama and his supporters are failing to take the blame for reversing Ghana’s economic growth from a favourable 14% in 2011 to an incredible 3.4% by December 2016.

Trust me, but for Akufo-Addo’s timely intervention, former President Mahama would have given away about 58% of Ghana’s bauxite to family and friends just about a week before exiting power.

But in all these, the brassbound NDC supporters would want discerning Ghanaians into believing that the erstwhile NDC government provided exceptional governance.

On the whole, the critics maintain that the successive NDC governments have proven to be worst economic managers who can never improve upon the socio-economic standards of living of Ghanaians.

Based on the prudence governance by the Akufo-Addo’s government and the favourable economic outlook, some of us can confidently state that Mahama is on the verge of making another history in Ghanaian politics.

Kill All Galamsey Operators Before They Kill Us By Destroyin...
7 minutes ago