How Politics Has Affected the Efficacy of Law and Institutions in Ghana. Doe Donatus 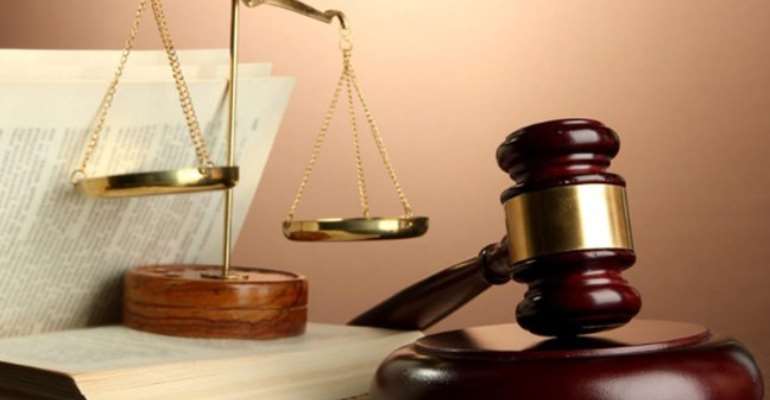 Day in day out, Laws are passed in Ghana, and institutions have also been established to execute laws. Elementary understanding of politics will help know that laws are meant to address certain problems in society and institutions are at the forefront of law making and its implementation.

The point of having bodies such as Parliament, the executive and the judiciary is to ensure for the development of society that is predictable, orderly and positioned for socio economic development. The essence of institutions such as parliament which have power of the purse, the executive and its agencies which are involved in law and policy implementation and the judiciary which checks the rightness and wrongness of circumstances and corresponding action in spirit and letter of the law, is to ensure that society benefits from order.

Long before institutional democracy which will establish arms of government and their auxiliary bodies such as the police and other agencies of state, there was decision making pertaining law and order and circumstances under which law must be enforced.

Politics and politically related activities are what brings about Law and institutions. More reason why Political scientists and scholars say, nowhere has alternative ways of developing institutions aside politics proved successful. The laws passed, the taxes we pay, and conditions under which we live are determined by politics. At the grandest level, many activities, such as regulation, the provision of public goods and services, and the redistribution of income, are best organized by the state through politics. The ability of politics to determine which laws get passed and enforced is why politics is a master activity in society and why burdens in society are laid at its feet. The efficacy or ability of our laws and institutions to get the required results herein lies in how good or bad our politics is.

Politics affects how good or bad our laws are, how best they are implemented and how best our institutions get required results.

The daily infractions in law making or implementation in the country and the non-effectiveness of institutions and agencies paints a bleak picture of how politics has negatively affected the efficacy of law and institutions in the country.

The "everyday Ghanaian" feels and knows that some people are above the law eventhough we preach rule of law and equality before the law. People who loot the state blatantly go through the people’s court where they are crucified but never arranged through the state sanctioned court where they can be punished. In times where they are arranged, it’s just for public show. Everyday allegations of corruptions, breaching procurement rules by top officials, tax evasion and circumventing due process never get punished. Institutions such as Economic and Organized Crimes Office (EOCO), CHRAJ and other watchdog bodies are also helpless. They are either limited in funds to execute their duties or lack the necessary facilities and man power to do so.

In circumstances where they have the necessary logistics and resources to execute their mandate, the backdoor dealings and political party lobbying prevent such investigations to lead to any result oriented conclusion where sanctions can be imposed. The lack of political will, and the paying of lip service to enforcement of laws by political parties shows how helpless our laws and institutions are.

People disrespect laws with impunity. Various cases of how laws lose efficacy is through how individuals flout traffic control regulations, engaging in black market dealing such as the "goro boys" and middle men in service provision in various sectors who hardly get punished.

Other scenarios are in cases where the laws apply differently to different individuals in similar cases. The decision not to obey court’s decision after granting bail to Gregory Afoko in the alleged murder trial are the daily infractions in law and institutional performance in the country. Investigations either leads to individuals been cleared, or transferred to other agency or institution.

There are instances where it seems people at the top of organization, firms and states are more powerful than those beneath them which are the masses and the general public. Procurement laws are obeyed selectively and general legislations rarely see the light of day in their application. The seat belt for public cars which never materialized, traffic control laws which are grossly disobeyed on busy streets, and activities by businesses such as improper registration, under declaration of goods and tax evasion which perpetuate even though there are laws against them.

Read a story on how an orphaned boy aged fifteen (15) was sent to jail for stealing because the police officer who processed him for court deliberately changed his age to 18 years for legal charges to apply to him.

If you believe in justice, you cannot believe in "Ghana" as presently constituted.

Moving forward in charting an effective political system that addresses these challenges and infractions, let's ensure the independence of institutions. Politics is fundamental in the making of institutions but unnecessary interference or influence of politics on institutions affects their efficacy and ability to produce results.

There must also be amendments in the constitution to enhance in that regard, the parliamentarians’ assumption of ministerial positions need be looked at.

There is also a need for reorientation on Weber's ideal bureaucracy which promotes professionalism and impersonal relations in our body politics and institutions.

In conclusion, let's ensure that laws are applied primarily to everyone, be it government officials, candidates, businesses, nonprofit organizations, and general citizens.