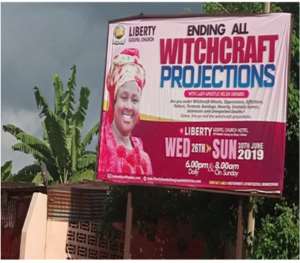 Ten years ago today, members of the Liberty Gospel Church attacked and robbed me in Calabar. They invaded a conference that I organized to highlight abuses linked to witchcraft beliefs in the region. Harmful practices related to witchcraft beliefs are pervasive in Nigeria. However, Cross Rivers and Akwa Ibom states were notorious due to widespread abuses and abandonment of suspected witch children. Pervasive child witch hunts in the region had been linked to the activities (programs, publications, films) of Helen Ukpabio and her Liberty Gospel Church. Ukpabio claimed to be an ex-witch, who eventually became a born again Christian with the power to identify witches and exorcize witchcraft. She founded the Liberty Gospel Church and devoted her ministry to hunting for witches in the region. Her violent campaign has left a legacy of death and destruction in Calabar.

As a Master’s student of Philosophy at the University of Calabar 2001-2005, I saw first hand the poisoning effects of Ukpabio witch-hunting activities. From the major highways that led to Calabar to the streets within the metropolis, billboards were advertising Ukpabio’s witchcraft deliverance sessions. There were banners with bold inscriptions at the gate of the University of Calabar, near the Akim and Calabar main markets warning people against witchcraft attacks on their business, families, and estate.

Ukpabio’s video, The End of the Wicked, was then one the most-watched and talked movie. Ukpabio’s books, on how to identify witches, were a constant reference point for those seeking to understand the phenomenon. Meanwhile, there were several reports on the media of egregious abuses of children identified as witches in communities across the region, and at Ukpabio’s deliverance sessions. Accused of witchcraft, these children were treated in every horrifying way. They were beaten with a hot iron, chained, starved or abandoned by family members. Unfortunately, there was very little public education and enlightenment going on in the region. Simply put, there was a witch hold on Calabar and the environs. Many people that I met in Calabar including university students and teachers were afraid to openly question witchcraft narratives or to publicly challenge the witch-hunting activities of Helen Ukpabio and her Liberty Gospel Church.

So when an opportunity came to organized a public workshop on child rights and witchcraft allegations, Calabar was most fitting. It was the most appropriate host city for the event. I thought that the program would bring to a fulfillment one of my deepest yearnings and desires-to provide a counter-narrative to the dominant witchcraft ideology and Ukpabio’s witch-hunting campaign in Cross River State and beyond. The region needed a platform to question, and challenge witchcraft narratives and to hold witch hunters to account. Also the region needed a space to support, rescue and rehabilitate victims of witchcraft allegations because alleged witches were treated as outcasts.

So the event of July 29, 2009 was advertised on the state radio and television, on the local and national newspapers. With a megaphone, I also went from street to street, from market to market, educating and inviting people to the program. Surely, I expected members of the Liberty Gospel Church and other witch believers at the event. There were some warnings, that Ukpabio and her church members might disrupt the meeting. But I thought it would not go beyond some heated arguments and warnings of the reality of witchcraft. I thought that the event would be a forum to educate and enlighten them. But I was mistaken. Ukpabio and her church members had other plans.

Looking back today, I must say that there were signs of their evil plan that I ignored. The first sign that things might go wrong came when I was notified, two days to the event, that the event would not hold at the conference hall of the state library. I was told that a state function, was slated to hold at the same venue on the same date. That the governor would be attending the function. So, our event was moved to the Cultural Center, which was about 500 meters from the state Library. The management of the state library must have been notified of the impending disruption of the event and they decided to move it to the Cultural Center to limit the damage. I later found out that no state function was held at the state library board on that day July 29, 2009.

Meanwhile, the organizers focused on adjusting arrangements to ensure that the change of venue did not so much disrupt the plans for the program. We arranged and had some of the volunteers stay the state library board on the morning of the event to direct the guests to the Cultural Center.

On the morning of July 29, all the volunteers arrived early at the venue to set up chairs and tables. Guests started arriving at about 9.00am including some university and college students. Two persons, who were probably members of Liberty Gospel Church, arrived and registered. I believe they must have used fake names to register. Pretending to be participants, they asked for the program. I was at the registration desk at the time. And I gave them the program leaflet and they quickly disappeared.

By 10 am, the representative of the police commissioner arrived and a few other guests from the state and beyond. I can say with the benefit of hindsight that among the guests in the room were members of the Liberty Gospel church who were coordinating with their counterparts planning to invade the venue.

Now as soon as I took the microphone and said: “We shall soon start”, there was some pandemonium in the hall as feet-stamping, yellow-vested men and women (over 150 of them) started coming in from different directions chanting some warlike religious songs. I was confused and kept looking in different directions as they trooped in. Within a few minutes, they had taken over the hall, including the high table section that was meant for lead presenters. At that point, I noticed that some of the people who were seated as guests stood up and joined the mob. I tried to calm them down, urging them to sit so that we could debate and dialogue civilly. But all my appeals fell on deaf ears. The representative of the police commissioner asked me to calm down. He called the state police headquarters and asked for some assistance. As we were trying to figure out how to contain the mob from the Liberty Gospel Church, one of them was using a video camera to record what was going on. At a point the video man focused the camera on me. I told him to stop, but he refused. I held the camera.

It was at this point that other church members descended on me including those who were seated, and whom I thought were participants. They punched me on my chest, head, and waist. They snatched my bag and broke my eyeglasses. Not too long after they made away with my bag and personal items, some police officers arrived, dispersed the crowd and arrested some persons. I went to the police station and made a statement, and then returned to continue with the event. Luckily, later in the day, I noticed that one of my "genuine guests" at the event recorded the incident with her cell phone and posted it on youtube. That was how the world came to know about this unfortunate mob action and attack by Ukpabio and her church members.

Ten years after the incident, the police have not prosecuted Helen Ukpabio and her church members. Even though, in his statement, one of the church members told the police that they were sent to disrupt the event by Helen Ukpabio. Instead, Ukpabio took me to court and asked for damages claiming I deprived her of the right to believe in witchcraft. But she lost. Incidentally, not much has changed regarding witch-hunting in Calabar. Ukpabio has continued her witch-hunting ministry and recently organized an event on witchcraft projections. In fact more pastors have joined the witch finding business. The government must step up efforts to stop Ukpabio and other witch hunters in the region.

The author has 265 publications published on Modern Ghana.