Tarkwa: A far cry of a mining community; full of terrible roads. 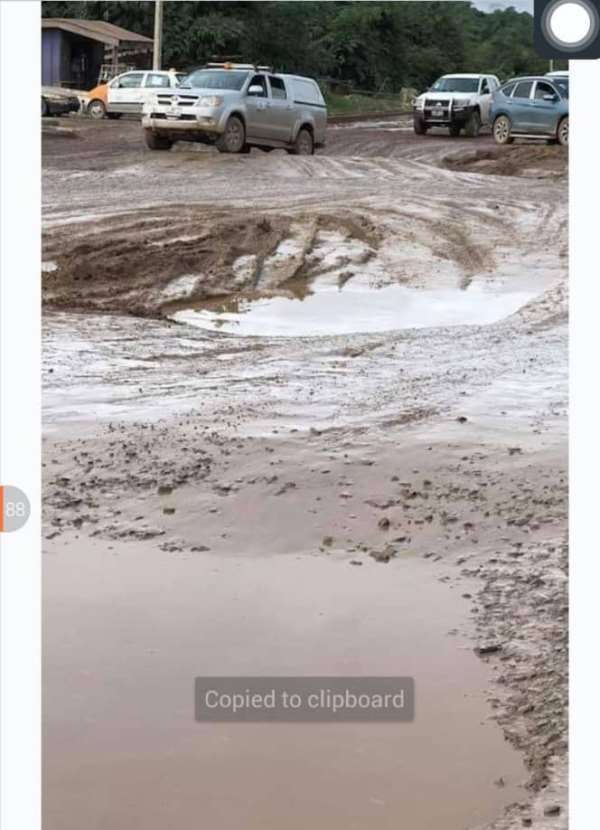 One thing that distinguishes mining communities from non-mining in developed economies is the level of development in the mining communities. Most mining communities in such developed countries have the very essential amenities that makes living in them a heart-warming experience. An example can be made of South Africa. Johannesburg is a beautiful city that speaks volumes of the relevance of the mining industry on the city. Its hospital, schools, railways, roads, and the Ports, etc, are well developed to provide the sort of living that is expected in a mining community. 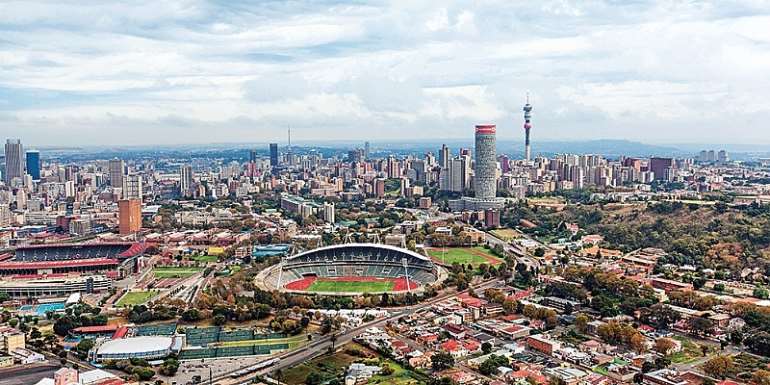 Tarkwa, one of Ghana’s old mining communities has fallen from grace to grass, if you want to be biblical. From what the Colonial masters left it to now, there hasn’t been any major progress. With respect to roads in the town, it can better be described as a retrogressed town. 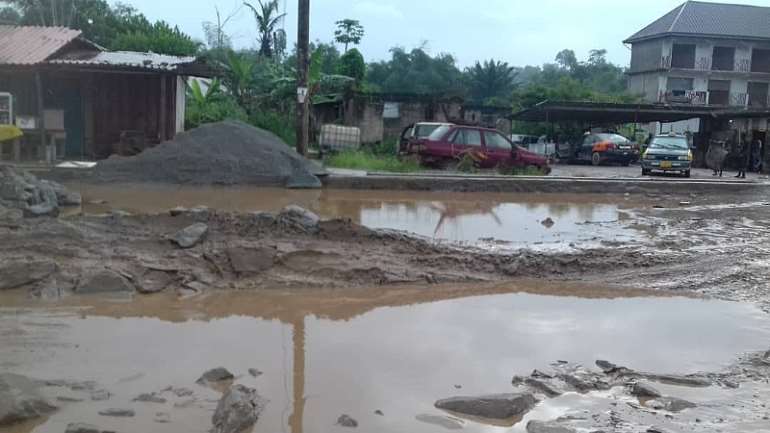 A portion of the Tarkwa-Takoradi highway.

The main highway from Tarkwa to Takoradi as at now, does not exhibit that of a mining community worth its salt, not to mention that it is a road leading to/and from a town that has contributed foreign exchange to the country’s reserves for more than a hundred years.

Recently, members of the community had to demonstrate against the poor road; they blocked the main road for several hours resulting in huge traffic on the road. Many travelers had to abandon their trip to other parts of the Western Region through the Tarkwa township, because there was no access road in the township that was not blocked. Their goal was just one; government must construct the Tarkwa-Takoradi road, especially the portion from a community called Ahwetieso to Tarkwa.

They wore red armbands,and red and black attire to register their displeasure of what they termed government’s neglect of their road. According to the demonstrators, the dusty nature of the road has resulted in increased air-related illnesses from 2016 to 2018.

A visit to the Tarkwa township is not a pleasant adventure lately,due to the deplorable nature of their highway. It is characterized by manholes and long distances of dusty surface. As the rains have set in now, the dust have given way to mud. Salon cars ply the road at their own expense; there is the need for massive repair work on every salon car that successfully travels from Ahwitieso to Tarkwa. 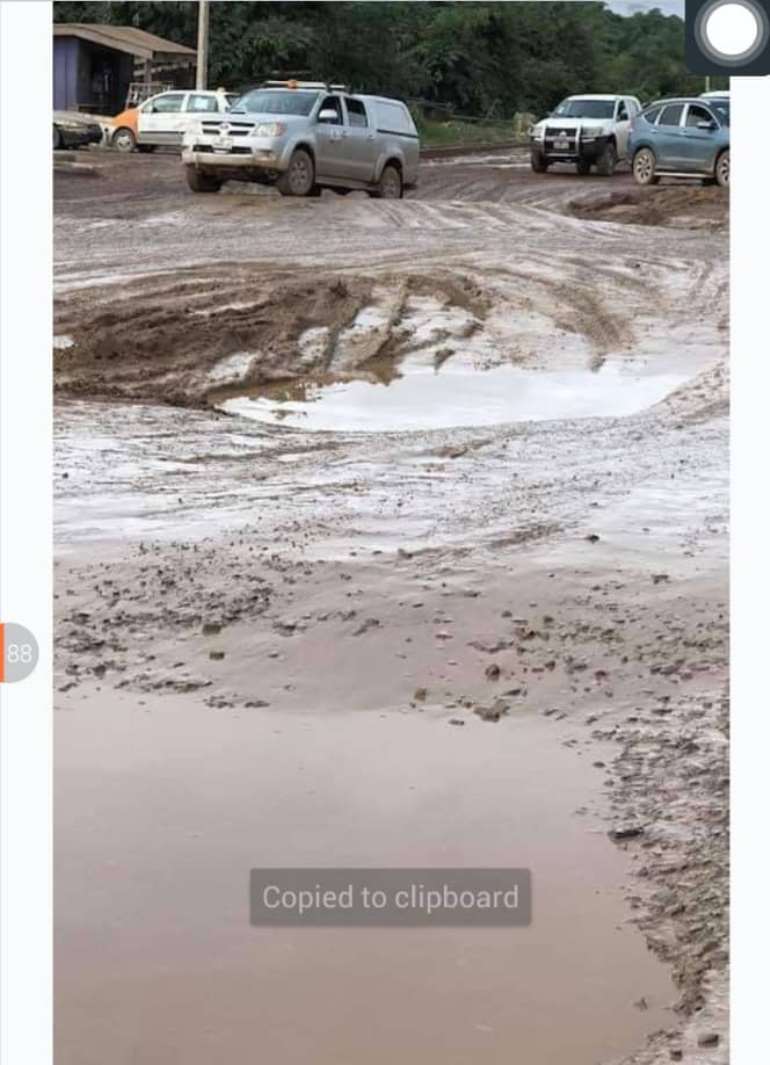 A portion of the Tarkwa road. 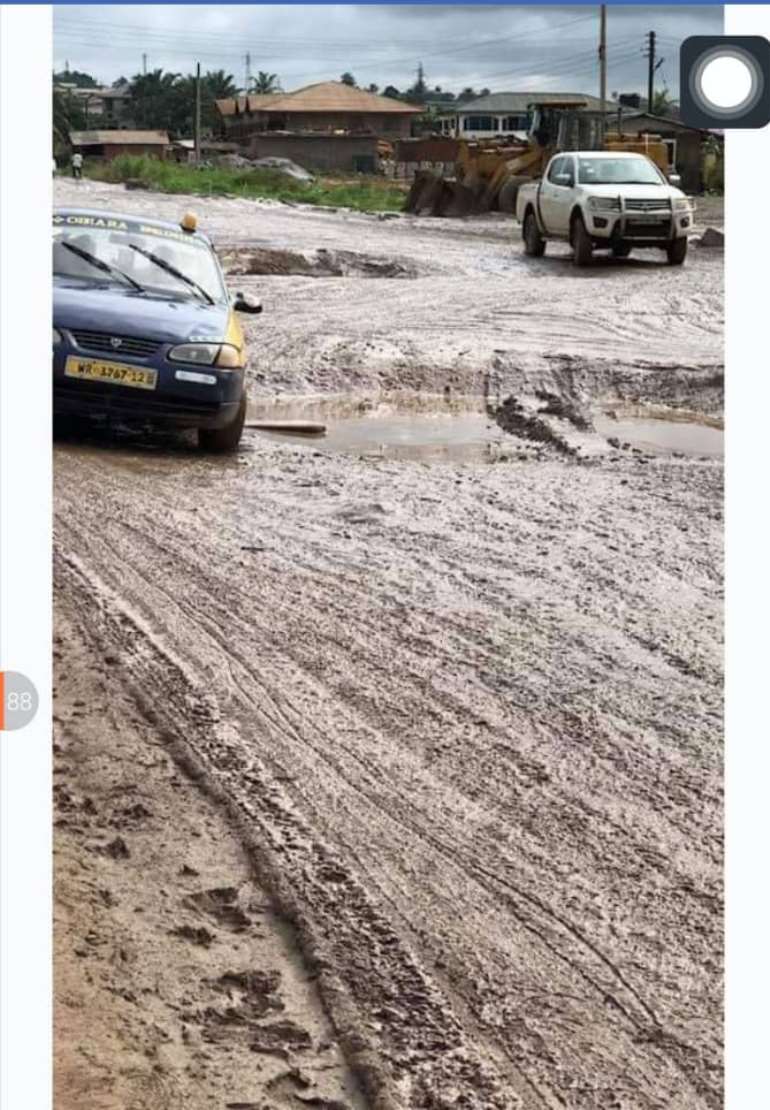 The muddy and manholes ridden Tarkwa road.
Let me now bring in data from the Ghana Chamber of Commerce on Ghana’s gold production to illustrate how unfair it is for the road in Tarkwa to be left the way it is.

The Performance of Ghana’s Mining Industry in 2017

Data from the Bank of Ghana shows that export of gold increased from 3.84 million ounces in 2016 to 4.61 million ounces in 2017 (Bank of Ghana, 2018). The 20 per cent growth in exports was driven mainly by a combination of modest increase in gold price and an upturn in the output of large-scale producers as well as the volume of gold exported by Licensed Gold Exporting Companies. As well, exports of manganese increased from 2 million tonnes in 2016 to 3 million tonnes in 2017 while shipments of bauxite also expanded from 1.14 million tonnes to 1.47 million tonnes over the same period (Minerals Commission, 2018). The growth rate in shipments of manganese and bauxite are 50 per cent and 29 per cent respectively. (Minerals Commission, 2018).

Production Performance of Member Companies in 2017

Against the backdrop of relatively higher gold prices and increased production of gold and manganese, the realized mineral revenue of the member companies of the Chamber rose by 13 per cent to US$ 5.945 billion in 2017 from US$ 5.262 billion in 2016. Output at Ghana’s largest mine, Gold Fields Ghana Limited-Tarkwa Mine, declined marginally by 0.3 per cent to 566,388 ounces in 2017 from 568,036 ounces in 2016.

From the foregoing statistics, Tarkwa deserves the kind of treatment that South Africa gives Johannesburg. “The terrible nature of the Tarkwa highway is a blot on the conscience of the country; Ghana,” – many people in the Western Region have been saying. The monies that the country has gotten out of Tarkwa makes every justification for the highway to be given an emergent attention.

For nothing at all, the 4km stretch from Ahwitieso to Tarkwa, must be attended to immediately. The sorry state of the road must be a thing of the past, looking at Tarkwa’s contribution to the nation’s GDP. 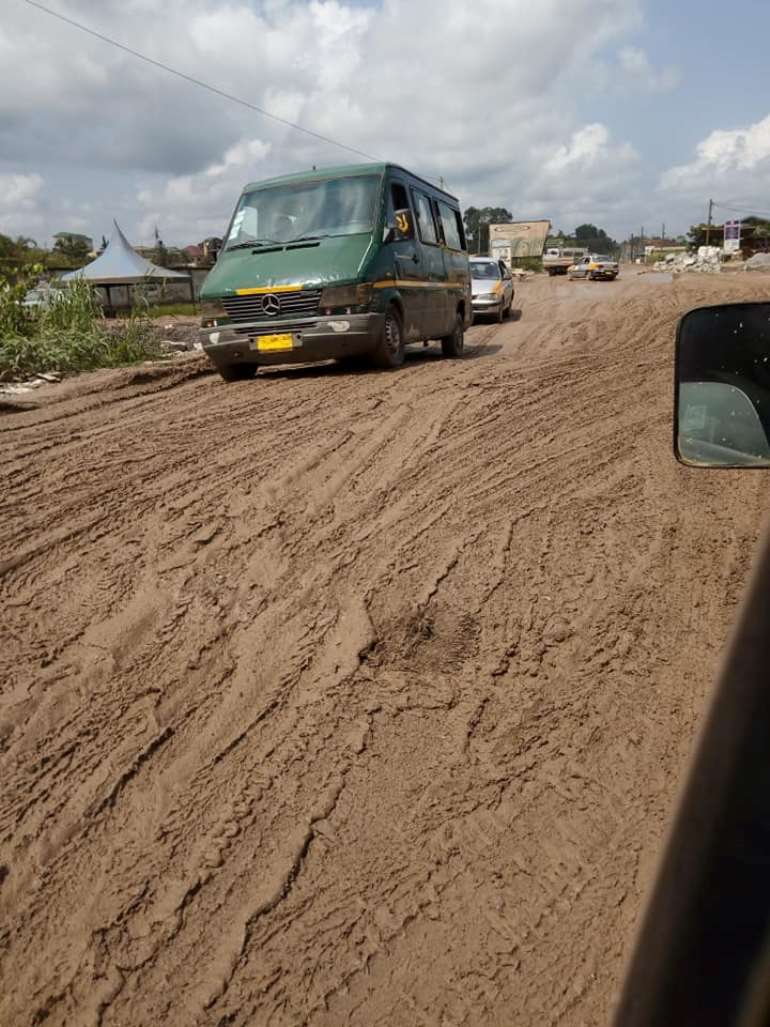 A portion of the Tarkwa-Takoradi highway.

Recently, Ghana overtook South Africa as the world’s leading producer of gold. When this news broke, many Ghanaians asked a simple question; what relevance does this have on the ordinary Ghanaian? The Tarkwa road is one of many, many challenges that confront people in mining communities in Ghana. Will the Government of Ghana, led by H.E Nana Addo Danquah Akufo Addo make this count, by, at least, fixing the Tarkwa highway as soon as possible?

The recent spectacle in Tarkwa makes nonsense of Ghana being the world’s leader in gold production. The narrative must change to give the people of Tarkwa, and by extension the whole of the Western region, a big relief in their travels through Tarkwa to other parts of the region and the Western North region. 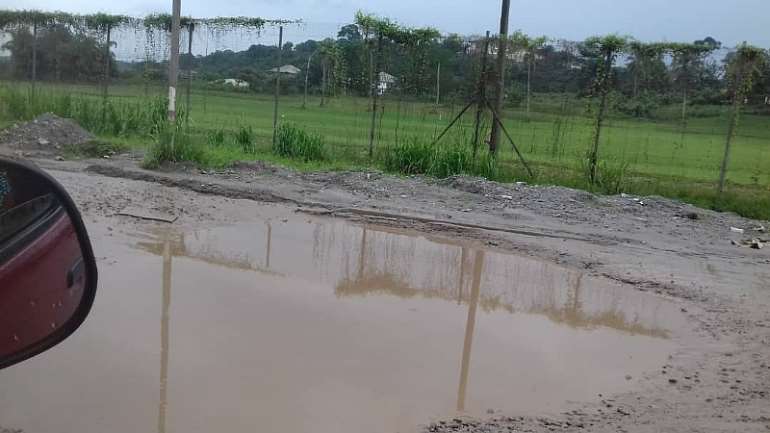 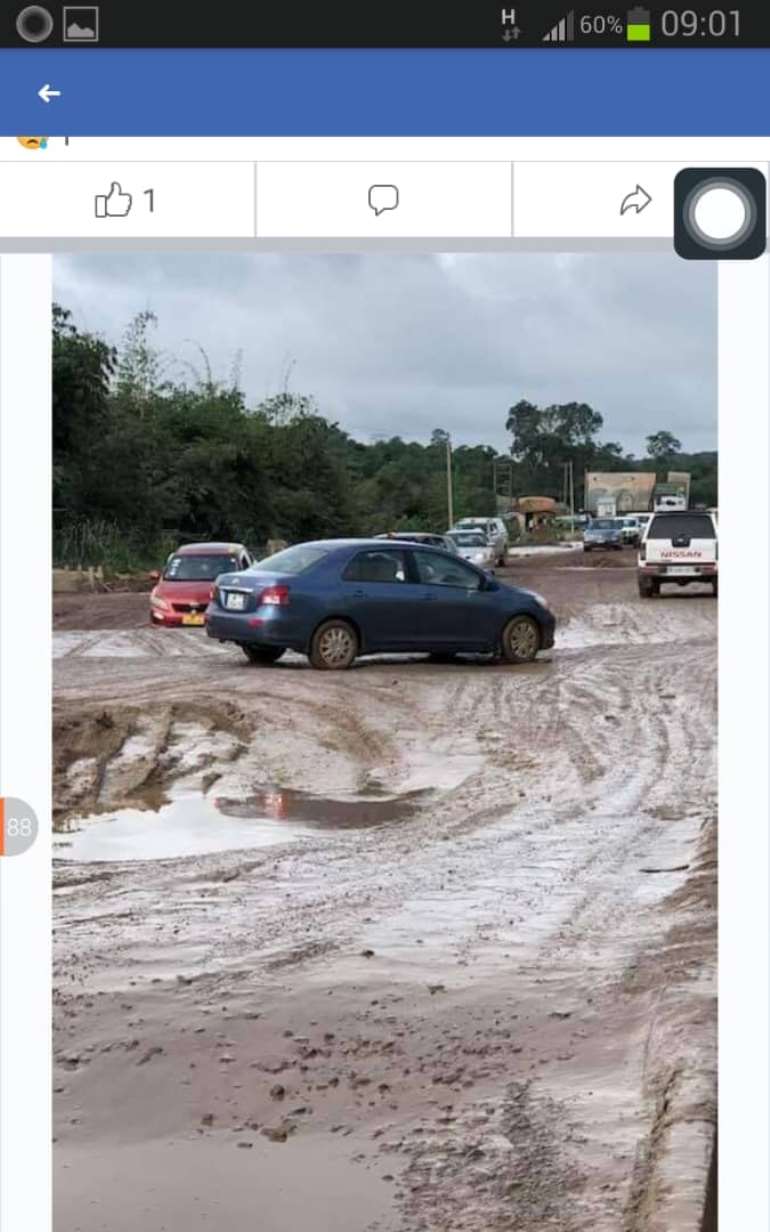 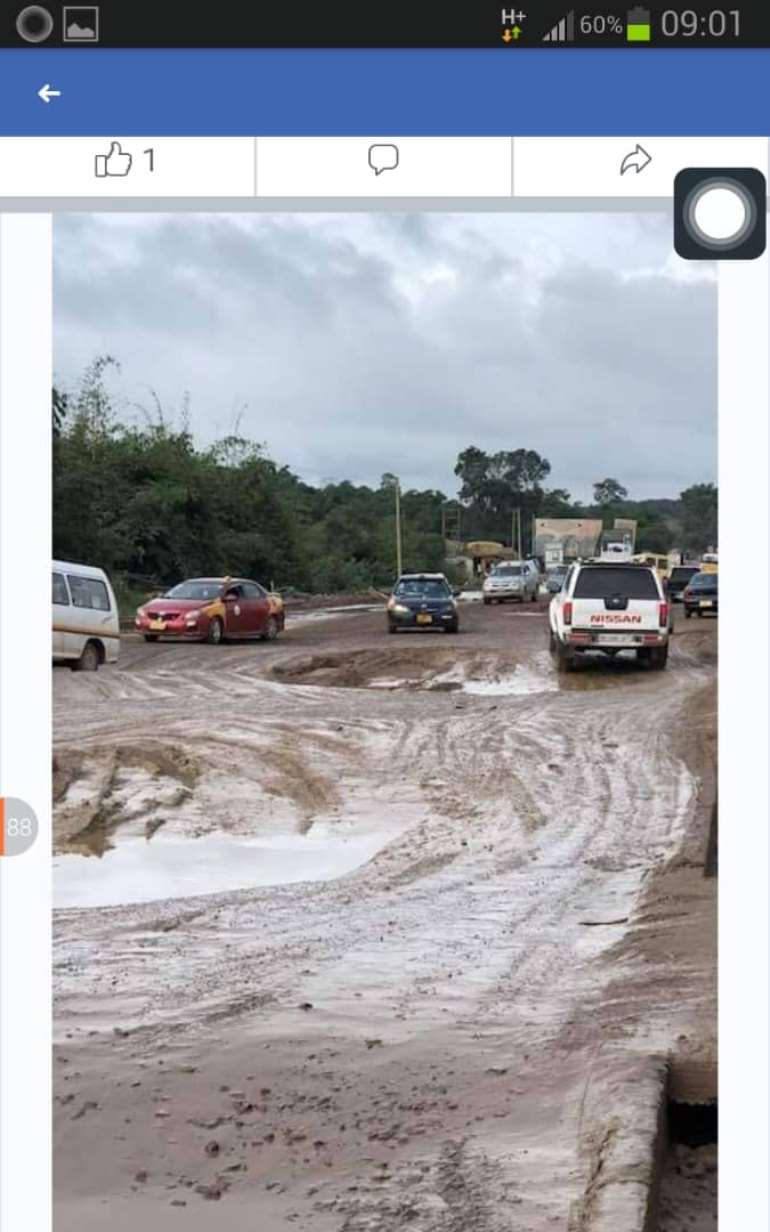 As to whether this narrative about Tarkwa will change any sooner, time will tell. I will rest my pen for now, but will definitely return with updates.

More Feature Article
Modern Ghana Links
Biden administration signals hope for a new START
The Police Must Desist From Selective Enforcement of Imposition of Restrictions Law
Ex-President Trump And Four Years Of Witchcraft In American Politics
Rawlings Regretted the Rotten Fruits of His Populist Revolution
Could a Supreme Court Judge be involved in Corruption?
“Prophet” Badu Kobi must Keep his Confusion-causing Chattering Beak Shut
Awon-Ate Foundation launched in Fumbisi
Remake The NPP Now!!!
Will there be consequences for many - Were the next Jerry Rawlings to strike?
Election Reports Quotes Dossiers
TOP STORIES