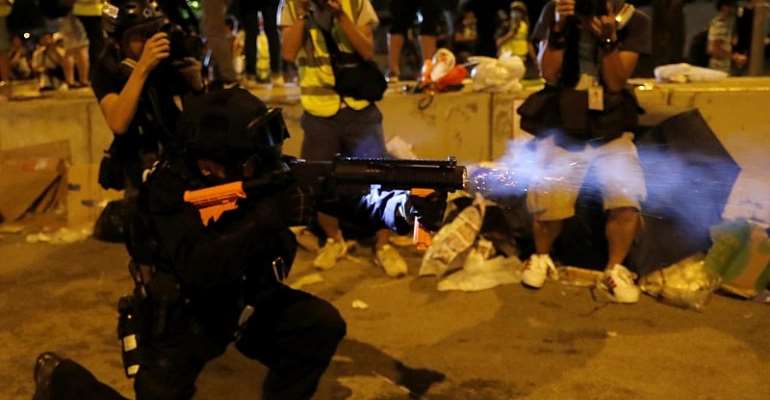 Hundreds of Hong Kong police fired tear gas and surrounded the central chamber of parliament after protesters smashed their way in and occupied the building. The violence on Monday coincided with the 22nd anniversary of the country's handover to China. This is the latest in a series of protests against a controversial bill that would allow extraditions to Beijing.

Once inside they tore down portraits of the city's leaders, hoisted a British colonial-era flag in the main chamber and sprayed the city crest with black paint.

"There are no violent protesters, just tyranny," one banner that was hoisted above the podium read.

"Hong Kong is not China," read another.
The symbol of the defiance was a single anti-government protester spraying black aerosol over the Bauhina flower that marks Hong Kong's flag and distinguishes the semi-autonomous territory from the mainland.

Pro-democracy demonstrators had taken to the streets on the anniversary of the city's handover from UK to Chinese rule.

Many protesters said they felt compelled to take the action because the city's pro-Beijing leaders had ignored public sentiment following marches against the loathed extradition law.

"We have to show the government that we won't just sit here and do nothing," added another, who gave her name as Joey.

The unrest followed a peaceful protest involving hundreds of thousands over the controversial extradition law that would allow extraditions to mainland China.

The government has agreed to suspend it indefinitely, but rallies continue and Chief Executive Carrie Lam is facing calls to resign.

Protesters accuse Beijing of stamping down on the city's freedoms and culture with the help of the finance hub's unelected leaders.

But the increasingly hardline tactics from some protesters have alienated some, with a large counter-rally in support of the police taking place on Sunday.

Long term resistance
Although Hong Kong returned from British to Chinese rule on July 1, 1997, it is still administered separately under an arrangement known as "one country, two systems".

Activists have organised a march every handover anniversary, calling for greater democratic freedoms -- such as the right to elect the city's leader.

This year's rally is framed by unprecedented anti-government protests that have drawn millions, with the public angry over police use of tear gas and rubber bullets.

Britain's Foreign Secretary Jeremy Hunt said his country's support for Hong Kong and "its freedoms is unwavering" and urged restraint from protesters in comments echoed by the European Union.

But activists have vowed to keep up their civil disobedience campaign.

"Whatever happens we won't lose heart," Jason Chan, a 22-year-old accountant added. "Resistance is not a matter of a day or a week, it is long term."