Ghana Is Just Scratching The Surface Of Galamsey 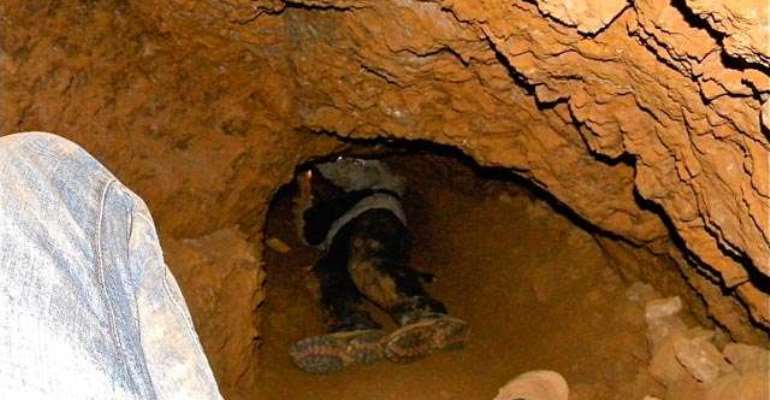 Sometimes, it takes a stranger to tell us home-truths we don’t want to accept.

On May 27, 2019, an article by a Voice of America correspondent, Sofia Christensen, was published on the Internet. Its theme was – galamsey.

It is an article which should be taken very seriously by all Ghanaians. For it shows that we have largely been deluding ourselves when we talk of “solving” the galamsey menace.

A lot has been written by Ghanaian journalists on the destruction being caused to our rivers, streams, water-courses and forests by galamsey, as well as the efforts being made by the Government to halt the process. But we need to be aware of what others are saying about us and our problems. Such reports can provide us with perspectives which might have eluded us somehow.

Ms Christensen writes: QUOTE: Only the chirping of birds and insects break the silence at a gold mining site in the Eastern Region of Ghana, right at the foot of the Atewa forest reserve. Caterpillar excavators stand still, as the two Ghanaian companies operating them wait for a new mining permit -- a process that has been in the works for months.

But a fresh pile of sludge spilt over a patch of vegetation suggests [that] the mine is being operated illegally. UNQUOTE

Please remember that this report was published nine solid months after the launching of OPERATION GALAMSTOP by the Government of Ghana! In that time, hundreds of galamsey operators have been “registered” and taught new methods of mining that do not destroy streams and farms. Most of the training took place, at government expense, at the Tarkwa University of Mines. Yet, there is the Government’s man on the spot saying that an “illegal” mine is being operated in the Atewa forest, only sixty or so miles from Accra.

Felix Addo-Okyreh, [sic] (Okyere?) who works for the Environmental Protection Agency (EPA), told the VOA reporter that “the sludge — referred to as slime' in mining jargon — is dirty waste water created when gold is separated from sediment, sometimes with the help mercury. It is stored in dams on the site. After a heavy rainfall, the “weak embankment” of the dam got broken. “This [the sludge or slime] is the result," he said.

Some of the facts contained in the report should make our Government wake up; facts that reveal the true nature of what is going on with regard to our anti-galamsey struggle: “The toxic slime landed a few meters away from a stream that flows into the Birem, a river supplying water to millions of people in the capital, Accra.”

This happened although “Ghana cracked down on illegal small-scale gold mining in 2017, after the national water company warned that the chemicals discharged by what is locally known as galamsey, could force the country to import water in the next two decades.”

Ghana importing water “in the next two decades?” It doesn’t sound possible, does it?

Is the correspondent making things up, you might ask. Well, please be sure that strange or alarmist though it may sound, what she’s saying is absolutely true.

An NGO report states that “the rate of deforestation in Ghana [that poses a threat to our water-sources] increased by 60 percent in 2018, faster than in any other part of the world…. in part due to gold mined illegally and often siphoned away by Chinese buyers.”.

Another NGO official says that the attempt to train small-scale miners to find alternative methods of earning a living was "kind of scratching the surface of the core issues of livelihood driving people”.

One view expressed to Ms Christinsen was that "The mission [of the Government] is to reduce [galamsey] to the barest minimum. [But] we cannot eliminate it completely, unless the citizens themselves police it."

Ahah! “Unless the citizens themselves police it”. But will they?

I doubt it. The reason is that the social bodies that could be used effectively to stop galamsey -- our traditional “Asafo” or “Kyirem” groups -- have been weakened almost to the point of death by (1) the unwillingness of some of our current chiefs to share income from traditional and governmental sources with them; (2) by the sheer fear the chiefs entertain that if the “Asafo” and “Kyirem” groups become powerful once again, they will agitate for the destoolment of unpopular chiefs; and (3) by the involvement, in galamsey, of many opaque people holding positions that make them “notables” in our rural communities. These fellows “employ” youths to carry out galamsey secretly for them.

It appears that so effective is the “influence” wielded locally by these “notables” that they are able to import Chinese nationals whom they take to sites where gold is present in the subsoil, especially river-beds. The Chinese refine gold from the pebbles and sand dredged up by the Ghanaian labourers employed by the “notables.”

One machine which is used almost exclusively by the Chinese hirelings is called the “changfang.” Now, only changfang owners know how they are imported from China, and at which Ghanaian ports they are discharged! But they are all over the galamsey areas, right into our rivers and streams, as well as food farms. This happens, despite of the numerous police checkpoints dotted around Ghana.

One recent report carried by one of our radio stations revealed that a new “method” of carrying out galamsey has been introduced into the rural areas. Young men carrying backpacks go around villages, pretending to be carrying out legitimate business of one sort or another. What the backpacks actually contain is equipment for detecting the presence of gold-ore. The equipment acts like the Geiger counter used to detect the presence of radio-active materials.

When the youths establish the presence of gold–ore somewhere, they mark the site secretly and go back to “work it” late at night, when detecting them is almost impossible.

PeaceFm has compiled disturbing reports detailing some of these dastardly acts on its website:


Villagers generally know who these murderers of our water and land resources are. But out of a false loyalty, or corruption, they won’t tell the authorities who the people are, nor provide the vital information that would enable the authorities to stop the malfeasance in its tracks.

Dear Ghanaians, are we waiting for “two decades” to elapse before we realize that we would, by then, have destroyed all our water and would need to import water? How would we do it? By boat, plane or on camel-back? How would we distribute it? Isn’t the very idea ridiculous?

Let’s wake up before it’s too late! Birds build their nests at spots where they can easily get access to water. Look at how even small and weak animals overcome their fear of predators and go to streams and rivers to drink water.

That’s the future we shall invite for ourselves, unless we wake up quickly from our stupidity-induced trance, and get rid of galamsey and its perpetrators.