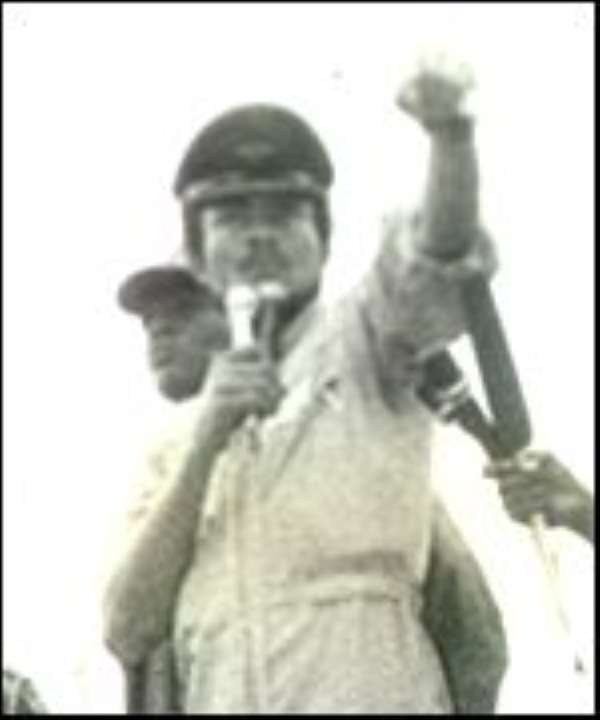 In his speech marking the 40th Anniversary, Supreme Court-proscribed celebration of the June 4, 1979 Mutiny, erroneously characterized as “The Revolution,” former President Jerry John Rawlings, leader of the aforesaid mutiny, scandalously claimed that President Hilla Babini Limann, late, whose democratically elected People’s National Party (PNP) government Chairman Rawlings and his cousin Capt. Kojo Tsikata overthrew on December 31, 1981, never learned any lessons from the savage atrocities wantonly perpetrated by the infamous Trokosi Nationalist Revolutionaries (TNR), else Mr. Rawlings and his Tribal Cabal of Butchers (TCB) would never have returned to power on December 31, 1981 (See “1981 Could Have Been Avoided If Limann Learnt Lessons – Rawlings” MyNewsGh.com / Ghanaweb.com 6/10/19).

This assertion is nothing short of laughable because to hear Mr. Rawlings tell it, nearly every one of the leaders whom the acclaimed architect of the June 4 Revolution groomed to take over from him, in the aftermath of the December 31 putsch, including Prof. John Evans Atta-Mills, late, and John Dramani Mahama, were more thoroughgoing corrupt leaders than the 8 military rulers whom the Rawlings-led Armed Forces Revolutionary Council (AFRC) summarily executed by firing squad at the Teshie Military Range (TMR), namely, Generals IK Acheampong, AA Afrifa, FWK Akuffo, EK Utuka, REA Kotei; Col. RJA Felli; Rear Admiral J Amedume and Air Vice-Marshal GY Boakye. This very poignant self-revelation and confession ought to have since long ago opened the eyes of Chairman Rawlings to the glaring fact that it was he himself who, in retrospect, never learned any meaningful lessons from the fact that as a self-proclaimed revolutionary and social reformer, he was an unforgivably epic failure.

Then also must be highlighted the fact that after virulently and self-righteously accusing President Limann of shamefully selling Ghana out to the Western corporatist nations that controlled the International Monetary Fund (IMF) and the International Bank for Reconstruction and Development (IBRD) or the World Bank in January 1982, by the following year, that is, 1983, Chairman Rawlings and the key operatives of his so-called Provisional National Defense Council (PNDC) had gone on their knees, hats in hand, beseeching the corporate managers of the IMF and the World Bank for an economic bailout. Indeed, if he had any conscience and was not mnemonically challenged, Mr. Rawlings would rather be celebrating the leadership acumen and visionary foresight of the Sorbonne-, France, and the University of London-educated liberal-democratic career diplomat turned politician, rather than belatedly and vacuously accusing Dr. Limann of nonexistent crimes.

To be certain, Mr. Rawlings would even plunge deeper in his involvement with the IMF and World Bank than the man that he had self-righteously overthrown, by having these Bretton-Woods institutions turn Ghana into an experimental Guinea Pig with their so-called Structural Adjustment Program (SAP) which, by 1990, had totally crippled the country’s economy. Mr. Rawlings’ speech also made little sense, in particular in the part where he called for the scrapping of the infamous and execrable Indemnity Clauses, which he now personally acknowledges, had been inserted into the 1992 Fourth-Republican Constitution to protect common thieves and political criminals like himself. On this occasion, however, the former President seemed to have completely lost his critical-thinking skills and faculties, assuming that, in fact, he ever possessed any such skills or intellectual faculties in the past.

You see, desirous of having the “sharp-toothed” roguish political scam-artists in his own National Democratic Congress promptly and severely punished for wanton corruption and abject disrespect for the law, Mr. Rawlings also called for the 1992 Constitution, whose crafting had been roundly boycotted by the leaders of today’s New Patriotic Party (NPP) to be immediately rewritten, as it provided undeserved cover for criminal operatives of the party that canonically and officially claims him as its founding-father. Maybe somebody ought to have informed Mr. Rawlings, before the presentation of his rambling tirade of a speech, that the Indemnity Clauses that were deviously inserted into the 1992 Constitution only protected crimes and atrocities committed and perpetrated by the operatives of the erstwhile Provisional National Defense Council prior to the beginning of the present Fourth-Republican dispensation. Which simply means that present crimes and legal transgressions are not Indemnity Clause-protectable.