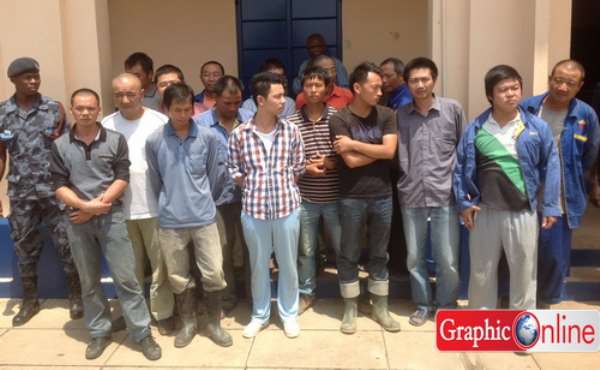 This week, Ghanaians received a rude awakening from the Chinese ambassador to Ghana Mr Shi Ting Wang in a single statement of wisdom and of undiluted facts.

This is a wall nail straight into the thick skulls of we Ghanaians and our misleaders. We really need this wall nail from Mr Ting Wang to wake us up from our deep slumber and stop needlessly blaming the Chinese for what we ourselves must take full responsibility for.

The Chinese ambassador to Ghana is saying in simple common sense language that Ghana is a lawless country whose governments and citizens facilitate the commission of a crime by foreigners for their mutual personal gains at the expense of the state of Ghana and its greater good. And that some Chinese people are simply taking advantage of this Ghanaian culture of lawlessness and self-destruction.

This is why the statement from the Chinese Ambassador makes the country's national culture look utterly weak on the geopolitical stage. Some Ghanaians have described the ambassador’s comments as insults. Those who get the drift also describe it as ‘’ deserving insults’’.

To paraphrase Dr Amos Anyimadu, one of Ghana’s sages; description, no matter how well done, is not a definition. So: I say the Chinese ambassador spoke the whole truth. No matter how you describe it, it doesn't change the truth. And if this truth is too bitter for us, we are not obliged to chew on it. We can just simply swallow it.

But here is the clear difference between the Chinese and we Ghanaians: Chinese have a strong national and cultural identity which propels and compels their principled educated elites to work only in the supreme interest of the Chinese dynasty/empire and its people at home and abroad.

Over 90% of Chinese are of the same ethnicity, speak the same language under one communist party government. All they think about first is the greater good of China, the empire. That’s the mindset that developed China. It is the same mindset that is leading China in their new global hegemonic economic conquests.

We-the-Ghanaians have a weak national and cultural identity(that’s if we have one at all) which produces a corrupt educated elite with allegiance to tribal/ethnic, partisan political groupings and their personal economic and family interests.

In other words, Ghanaians are educated to aim at and facilitate the accumulation of personal wealth, first for ourselves, family and friends, our tribesmen and clansmen, political party affiliates, etc at the expense of Ghana and the greater good. That is how we obtain celebrity status in Ghana - shamelessly. We have become more individualistic than the Westerners who invented individualism. And this is why we are underdeveloped and still feeding on crumbs.

I am not advocating that Ghana should become a communist state. I am advocating that Ghanaian leaders also advocate and shape a strong national and cultural identity. It has to be a vision of the future that the people will all share - like the ''Creedal identity'' to make the Ghanaian people proud of themselves within a growing liberal democracy.