Nigeria Should Be The One Lending Benin Bronzes To The European Museums And Not The Other Way Around. 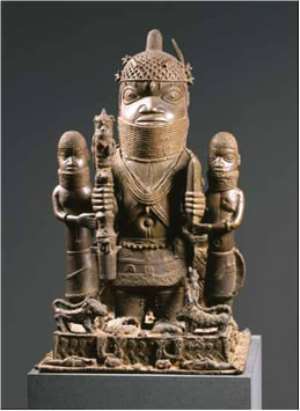 A leading German professor of African History at the University of Hamburg, Prof. Jürgen Zimmerer, has declared in connection with the so-called temporary loans of Benin bronzes by Western museums to Nigeria, that this is wrong. According to Zimmerer it should be Nigeria/Benin, the original owners who should be loaning these artefacts to the Western museums which have been illegally holding them for some hundred years; Western museums should also be making payments for the loans which could be used by Nigeria to build new museums. Zimmerer made this declaration in a recent interview in which he also suggested, among other things, that the Humboldt Forum should be renamed Benin Forum. (1)

Whether Germany would be prepared to make a change of name to the 700million Euro project that should demonstrate the cultural achievements of Germany, and whether the Germans have so much respect for Africans and African culture so as to name such a project after Benin, is a matter I would not want to discuss or speculate on. We have always maintained that what Germans do with their resources is a matter for Germans. On the other hand, what Germans do with the thousands of looted African artefacts, including the Benin bronzes in their museums, is a matter of concern for all Africans.

Zimmerer’s view that it should be Nigeria that is lending Nigerian artefacts to Germany and not the other way around would seem to us to conform to the history of the artefacts that the Germans acquired from the British in 1897, knowing fully that the artefacts had been looted a few months earlier in the brutal Benin invasion by the British under the so-called punitive expedition, as if Benin were under British rule. Even under German law at the time of invasion and acquisition, that acquisition would not have been regarded as legal since there was no bona fides on the part of the Germans.

We have expressed in previous articles our view that Nigeria taking a loan of its own looted artefacts from the very State that looted the artefacts or those who illegally acquired them turns logic, morality and history upside down. Some may not accept our analysis of the events, but they have so far not come up with better or more convincing analysis why borrowing your own looted artefacts from the looters or their successors is a better option than restitution. They have not demonstrated in logic or morality how you can borrow your looted artefacts from the very State that looted them and its allies. They have not clearly explained who the owners in this curious arrangement are, the Austrians, British, Dutch and Germans who claim ownership in the artefacts or the Nigerians who have lost control of the objects for hundred years but regard themselves, and are so seen by many of us, as the legitimate owners. Nigerians and the Europeans cannot be at the same time legitimate owners of the looted artefacts.

The European museums busy with loaning Nigerian artefacts to Nigeria know very well that these are looted objects. They know also that the United Nations/ UNESCO have been urging Member States since 1972 to return these artefacts to their country of origin and yet they act as if there were no rules or regulations here. Every Nigerian government and Parliament since Independence has called for the restitution of these artefacts and so, if Nigeria is going to accept anything less than restitution, we would need a better explanation other than that the Austrians, British, Dutch and Germans, are willing only to make loans. As recently as last year Nigeria issued a press release calling for unconditional return of her looted artefacts. (2)

The refusal of the European States to restitute the Benin artefacts may be revealing of more than one thing. It reveals the extraordinary lack of respect for Nigerians and for Africans. When we consider that the Humboldt Forum/Ethnology Museum hold 580 Benin artefacts, the World Museum, Vienna 167, Museum at Rothenbaum, Hamburg, 200, the British Museum holds between 300-700 Benin artefacts, it seems incredible that these European museums that are constantly speaking about cooperation, exchange and circulation of artefacts are not willing and ready to restitute even a small portion of their large holdings.

Excessive selfishness seems to have become the creed of Western museums and they are still not willing even to make symbolic gestures. The determination to keep forever the looted artefacts of Africans seems to have become part of their being and all the various theories and concepts they have been spinning all these years are simply to avoid restituting any artefacts. Surely, this cannot be right. Those taking refuge in extraordinary selfishness must re-examine their own positions. They cannot expect all Africans to accept this unsatisfactory position which bothers on racist assumptions of superiority that have characterised African -European relationships for centuries.

No wonder these Western States and museums are critical of the Sarr-Savoy report that urges these relationships to be based on consent and cooperation and not on force and violence as in the past. Indeed, many of the critics of the report ignore completely the second part of the title of the report: The Restitution of African Cultural Heritage-Toward a New Relational Ethics They have mostly concentrated on the museological aspects of the report, about the artefacts themselves, about where the artefacts would be housed etc., but about the symbolism of the artefacts, what they signify or indicate concerning the relationships between Africa and Europe has been passed over. They can all the more easily ignore the ethical side of the relationship between Africa and Europe since they act as if nothing had changed, as if decolonization had not started. They see no need for fundamental changes in the relationships between two neighbouring continents in which for the last 5oo years one has inflicted untold violence and destruction of the other that does not seem able to defend itself against the superior technological violence of the other.

The emphasis many opponents to restitution of African artefacts give to the security of the artefacts and their faith, should there be restitution, is often a reflection of a deep disrespect for the African. They are more concerned about the artefacts than about the desire of the Africans to have their objects back. This reminds one of Frobenius who had great admiration for Ife art but only contempt for those who produced it. He declared once: "Before us stood a head of marvellous beauty, wonderfully cast in antique bronze, true to the life, incrusted with a patina of glorious dark green. This was, in very deed, the Olokun, Atlantic Africa's Poseidon." The same Frobenius also expressed contempt for the people he met at Ife:

"I was moved to silent melancholy at the thought that this assembly of degenerate and feeble-minded posterity should be the legitimate guardians of so much loveliness.” (3)

It is somewhat ironic that European States that have killed Africans, looted their artefacts and burnt their towns, should ask for understanding of their difficulties with their internal laws regarding restitution of looted African artefacts. What about the difficulties of the Africans who are now asking for restitution of some of the artefacts? Those who have the most elementary acquaintance with European laws know that the laws could be changed by parliaments and that if the European Governments and museums wanted, they could have done this long ago and at the latest after Independence in the 60s where demands for restitution became evident and inevitable for the artefacts that should have been released with proclamation of Independence. The European museums and States should be aware that loans as a substitute for restitution of looted African artefacts are not acceptable to most Africans even if some of our eminent and learned jurists and politicians accept this. Most of us cannot accept that Europeans who have hitherto derided our cultures and artefact as ‘primitive’ now cannot part with them. European States and museums would have to adopt another strategy.

We believe that given the particular position that the Benin bronzes occupy in Nigerian-British relations as well as their great symbolism in Afro-European relations, nothing short of restitution, at least of a large number of these artefacts, will take adequate account of our relationships, present and future, and also do justice to the history of those relationships since 1897,considering the loss of lives involved and the destruction of property in Benin City for which no compensation has so far been paid.

3..Wole Soyinka, "This Past Must Address Its Present," Nobel Lecture, December 8, 1986, http://nobelprize.org/nobel_prizes/literature/laureates/1986/soyinka-lecture.html

Oba Ovonramwen, during whose reign the British looted the Benin Bronzes, with guards on board a ship on his way to exile in Calabar in 1897. The gown he is wearing hides his shackles. Photograph by the Ibani Ijo photographer J. A. Green. From the Howie photo album in the archives of the Merseyside Maritime Museum.